Considering their primary function is so simple, that of separating the bees from the roof, crownboards can vary from cheap and cheerful to complex and multifunctional. At one end of the spectrum is a simple sheet of thick plastic, at the other are the multiply-perforated offerings that Abelo supply with their poly hives. 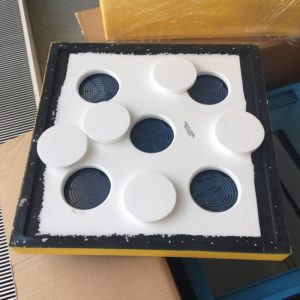 Thick, clear polythene sheeting can be purchased from eBay by the metre. 1000 gauge sheet (250 microns) is probably about right. Unsurprisingly, the more you buy the cheaper per square metre it gets, and you’ll find lots of uses for it other than crownboards. Some of it is sold as damp proof membrane, or DPM. A 4m x 6m sheet costs less than £1 a square metre from which you’ll get four 50cm x 50c m ‘crownboards’. The clear poly sheeting is actually somewhat opaque, but is still preferable to the dark DPM which is so effective at deterring woodpeckers.

And if you really can’t stretch to 25p then a fertiliser or compost sack, suitably washed, can substitute. 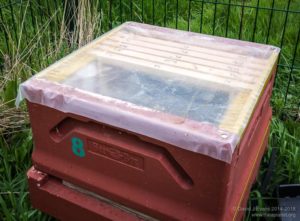 I use these polythene crownboards on most of my bait hives, on Kieler mini-nucs for queen mating and on any hives when I exhaust other options. They work well. You can see well enough through them to see the strength of the colony, they are easy to peel back as wax and propolis doesn’t stick much to them and – once they get too manky† – you can discard them. Alternatively, freeze them overnight and then simply ‘crack’ off the propolis and wax before reuse.

Blowin’ in the wind

These lightweight crownboards tend to disappear over the apiary fence if there’s much of a breeze. Tuck them under the edge of the removed and upturned roof during inspections, or under the bee bag if you’re using lightweight Correx roofs that also have a tendency to blow away.

One of the benefits of being so light weight is that the poly sheet doesn’t crush bees when laid across the top of the hive. They can usually wriggle back down between the top bars of the frames reasonably easily even once the roof is on.

Jack of all trades

These poly sheets have lots of other uses. Over the last few months I’ve used them: 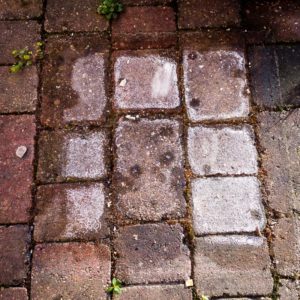 † Manky means 1) inferior or worthless, or 2) dirty and unpleasant. Clearly, in the context I’ve used it, the second meaning that applies. However, when I used Google to look up the meaning it returned a strikingly topical definition: 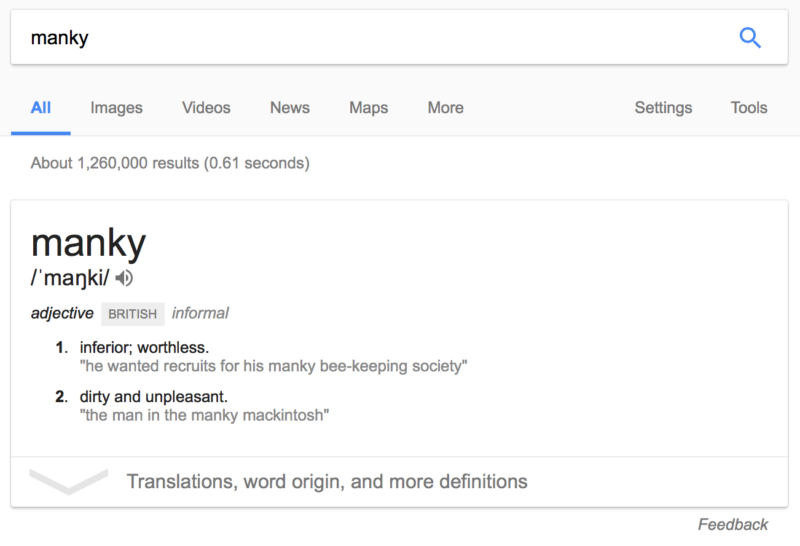 ‡ On cedar boxes you can pin it to outer sidewall of the brood box or super, folding it over the top of the box. On windy days it tends to flap about so this isn’t always an ideal solution, but at least it doesn’t blow away.