About this time last year a swarm arrived in a bait hive in my back garden in Fife. Almost exactly one year later a different bait hive in the same spot was occupied by another swarm … or, possibly, a very good-sized cast. 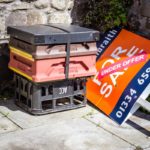 A bait hive on a milk crate 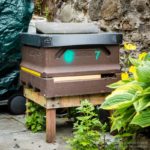 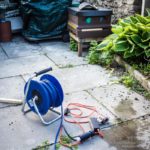 Figure 5. Varroa treatment of a new swarm in a bait hive…

The bait hive was being investigated by scout bees for a few days but on 6th, which was a very warm day here in Fife, the numbers increased markedly from a couple of dozen to a hundred or more. On my return from work on the following day the swarm was in residence. My neighbour reported seeing a ‘huge swarm arriving’ at about 11am.

The hive contained a single old, dark brood frame and about five foundationless frames, together with a cotton bud dipped in lemongrass oil. I’ve previously described why I think foundationless frames are so convenient for bait hives – they provide the bees with guides to build new comb without taking up significant space in the box. It’s worth remembering that the scout bees are seeking out a sheltered, south facing, bee-smelling (ideally), empty space of about 40 litres volume i.e. about the same as a single National brood box. Foundationless frames take up little space, but mean that an arriving swarm can start building new comb immediately … and they do.

I posted a photo last week of a swarm from the bee shed that had clustered because the queen was clipped and so unable to fly. I dealt with the swarm within a couple of hours of it settling. Once cleared, the wall of the bee shed was dotted with small crescents of wax as the bees had already started to build new comb. In the bait hive, when checked on the evening of the 8th (less than 48 hours after the bees arrived) they were well on their way to drawing out the first three foundationless frames, with the first of these being half full of nectar, presumably from the dregs available in the nearby OSR fields.

Almost certainly … and there’s no better time. When swarms leave a hive they take with them up to 35% of the Varroa population as phoretic mites. A large swarm from a heavily infested hive can therefore introduce an unhealthy dose of virus-riddled mites to your apiary. These will rapidly spread to your other hives. I therefore routinely treat swarms with suitable miticides soon after they arrive, well before any brood is sealed. I don’t look for DWV symptoms or bother searching for signs of phoretic mites, I just treat. Due to work commitments this swarm had to be treated on the third day after arrival, before I was even certain whether the queen was laying or not. Within the first 24 hours after treatment (with sublimated oxalic acid) there were about 40-50 mites on the board, with more falling over the next couple of days. It’s far easier and more effective to treat when there’s no brood present and so give the colony the very best chance of getting well established without a pathogenic virus load.

Finally, after a day of heavy rain, I took advantage of the bees being all ‘at home’, sealed the entrance and relocated them to another apiary to make space for a replacement bait hive on the same spot … on the off chance that swarming here isn’t over yet.

If it is, then there’s always the same time, next year.

Same time, next year was a 1978 romantic comedy starring Alan Alda and Ellen Burstyn about a couple, married to others, who meet by chance, develop an “instant rapport” or at least “really hit it off” (one of the quotes from the film) and then meet again, year after year, both gradually changing, ageing and dealing with life’s crises.