Bees are very newsworthy. Barely a week goes by without the BBC and other news outlets discussing the catastrophic global decline in bee numbers and the impending Beemaggedon.

These articles are usually accompanied by reference to Colony Collapse Disorder (CCD) and the apocryphal quote attributed to Albert Einstein “If the bee disappears from the surface of the earth, man would have no more than four years to live” 1.

They also generally illustrate news about honey bees with pictures of bumble bees … and conveniently overlook the global increase in honey bee colonies over the last 50 years.

And the story is particularly newsworthy if it includes the opportunity for a series of entirely predictable (but nevertheless amusing) puns involving mushrooms or fungi 3.

And for me, it is even better if it involves viruses.

It was inevitable I’d therefore finally get round to reading a recent collaborative paper 4 from Paul Stamets, Walter Sheppard, Jay Evans and colleagues. Evans is from the USDA-ARS Beltsville bee labs, Sheppard is an entomologist from Washington State University and Stamets is a really fun guy 5, an acknowledged mushroom expert and enthusiast, award-winning author 6 and advocate of mushrooms as a cure for … just about anything. Stamets is the founder and owner of Fungi Perfecti, a company promoting the cultivation of high-quality gourmet and medicinal mushrooms.

An an aside, you can get a good idea of Stamets’ views and all-encompassing passion for ‘shrooms by watching his YouTube video on the Stoned Ape [hypothesis] and Fungal Intelligence.

It has been shown that extracts of fungi can have antiviral activity 7, though the underlying molecular mechanism largely remains a mystery (for a good overview have a look at this recent review in Frontiers in Microbiology by Varpu Marjomäki and colleagues). I’m not aware of any commercial antivirals derived from fungi 8 and none that I’m aware of are in clinical trials for human use.

Stamets cites his own observations of honey bees foraging on mycelia (the above-ground fruiting body we call ‘mushrooms’) and speculates that this may be to gain nutritional or medicinal benefit. 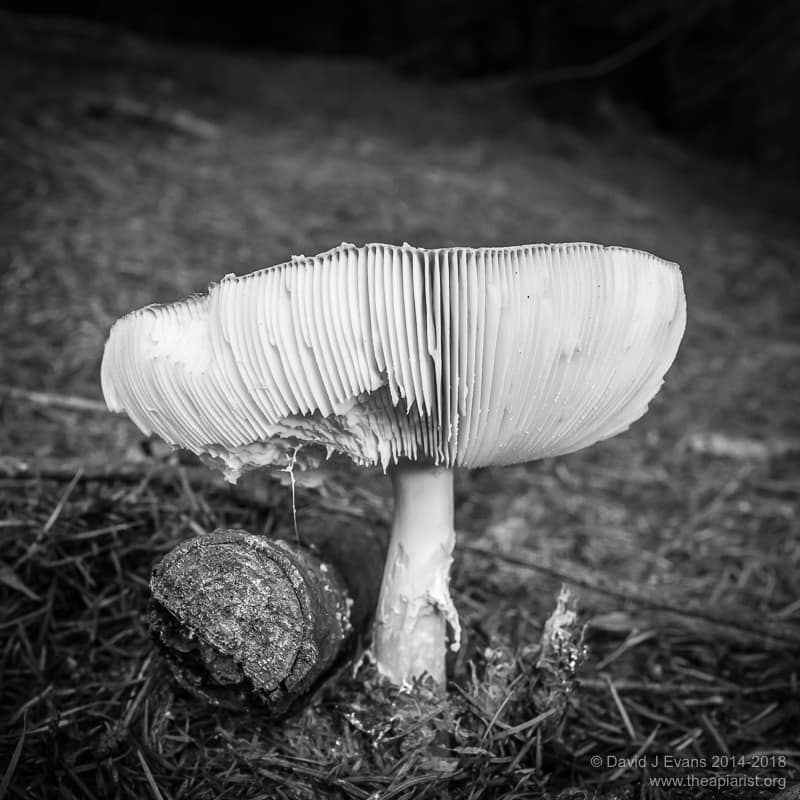 This seems entirely reasonable. After all, bees collect tree resins to make propolis, the antimicrobial activity of which may contribute to maintaining the health of the hive.

I’ve not seen bees foraging on fungi, but that certainly doesn’t mean they don’t.

Whatever … these observations prompted the authors to investigate whether mushroom extracts had any activity against honey bee viruses.

Not just any viruses

DWV is transmitted by Varroa and is globally the most important viral pathogen of honey bees. It probably accounts for the majority of overwintering colony losses due to a reduction in longevity of the fat bodied overwintering bees.

LSV was first identified in 2010 and appears to be widespread, at least in the USA. It has also been detected in Europe and is a distant relative of chronic bee paralysis virus. It has yet to be unequivocally associated with disease in honey bees.

Not just any ‘shrooms

Mycelial extracts were prepared from four species of fungi. As a lapsed fly fisherman I was interested to see that one of those chosen was Fomes fomentarius, the hoof fungus which grows on dead and dying birch trees. This fungus, sliced thinly, is the primary ingredient of Amadou which is used for drying artificial flies 9. 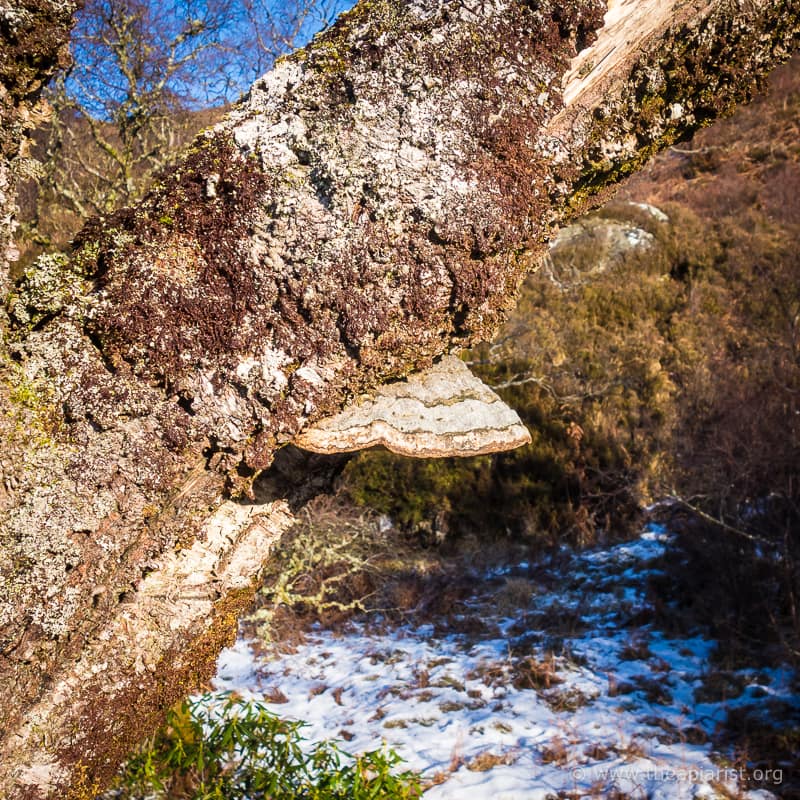 Hoof fungus … and not a honey bee in sight.

Mycelial extract preparation took many weeks and generated a solution of ethanol, aqueous and solvent soluble mycelial compounds together with potentially contaminating unused constituents from the growth substrate. This was administered in thin (i.e. 1:1 w/v) sugar syrup.

In laboratory trials all the fungal extracts reduced the level of DWV or LSV in caged honey bees by statistically significant amounts.

Unfortunately (at least for the layman trying to comprehend the paper) the reductions quoted are n-fold lower, based upon an assay called a quantitative reverse transcription polymerase chain reaction. Phew! It might have been preferable – other than it being appreciably more work – to present absolute reductions in the virus levels.

Nevertheless, reductions there were.

Encouragingly they were generally dose-dependent i.e. the more “treatment” added the greater the reduction. A 1% extract of hoof fungus in thin syrup reduced DWV levels by over 800-fold. Against LSV the greatest reductions (~500-fold) were seen with a different extract. In many cases the fold change observed were much more conservative i.e. less activity (though still statistically significant).

A) Normalised DWV and LSV levels in individual bees. B) Activity of mushroom extracts against LSV.

These lab studies encouraged the authors to conduct field trials. Five frame nucleus colonies were fed 3 litres of a 1% solution of one of the two most active extracts. Virus levels were quantified 12 days later. Control colonies were fed thin syrup only.

These field trials were a bit less convincing. Firstly, colonies fed syrup alone exhibited 2- to 80-fold reduction in DWV and LSV levels respectively. Against DWV the fungal mycelial extracts reduced the level of the virus ~40-fold and ~80-fold better than syrup alone. LSV levels were more dramatically reduced by any of the treatments tested; ~80-fold by syrup alone and ~90-fold or ~45,000-fold better than the syrup control by the two mycelial extracts.

It’s worth emphasising that syrup-alone is not the correct control for use in these studies. As stated earlier the mycelial extract likely also contained constituents from the fungal growth media (sterilised birch sawdust).

The authors were aware of this and also tested extracts prepared from uninoculated birch sawdust. This definitely contained endogenous fungal contamination as they identified nucleic acid from ‘multiple species’ of fungi in the sterilised sawdust, the majority from three commonly birch-associated fungi (none of which were the original four species tested).

The authors are a little coy about the effect this birch sawdust extract had on virus levels other than to say “extracts from non-inoculated fungal growth substrate also showed some activity against DWV and LSV”. In lab studies it appears as though ‘some activity’ is between 8- and 120-fold reduction.

Without some additional controls I don’t think we can be certain that the compound(s) responsible for reducing the viral levels is even derived from the mushroom mycelium, whether the endogenous ones present in the sawdust, or those grown on the sawdust.

For example, perhaps the active compound is a constituent of birch sawdust that leaches out at low levels (e.g. during the extraction process) but that is a released in large amounts when fungi grow on the substrate?

Readers with good memories may recollect articles from fifteen years ago about fungi with activity against Varroa. In that case the fungus was Metarhizium anisopliae. There are still groups working on this type of biological control for mites but it’s probably fair to say that Metarhizium has not lived up to its early promise 10.

A lot more work is needed before we’ll know whether mushroom extracts have any specific activity against honey bee viruses. There are lots of unanswered questions and it will take years to have a commercial product for use by beekeepers.

Don’t get rid of your stocks of oxalic acid or Apivar yet!

What are the active ingredient(s) and mode of action?

Do the extracts actually have any activity against the viruses per se, or do they instead boost the immune response of the bee and make it better to resist infection or clear established infections?

How specific are the extracts? Do they have activity against other RNA viruses of honey bees? What about Nosema? Or the foulbroods? If they boost immune responses you’d expect a broad range of activities against bee pathogens.

You’d also expect that bees would have evolved to actively forage on mushroom fruiting bodies and so be a common sight in late summer/early autumn.

Are they toxic to bees in the longer term? Are they toxic for humans? Fomes formentarius is considered “inedible, with a slightly fruity smell and acrid taste”. Delicious!

Finally, is the reduction in virus levels observed in field studies sufficient to have a measurable positive influence on colony health? It’s worth remembering that Apivar treatment reduces mite levels by 95% and virus levels by about 99.9999%. 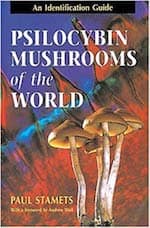 Magic mushroom is a generic term used to refer to a polyphyletic group of fungi that contain any of various psychedelic compounds, including psilocybin, psilocin, and baeocystin. Talk to Frank to find out more about the effects and dangers of magic mushrooms. The de facto standard guide for the identification of magic mushrooms is Psilocybin Mushrooms of the World by … you guessed it, Paul Stamets.

The term magic mushroom was first used in Life magazine in 1957.

A magic bullet is a highly specific drug or compound which kills a microbial pathogen without harming the host organism. The term (in German, Zauberkugel) was first used by Nobel laureate Paul Ehrlich in 1900. Ehrlich discovered/developed the first magic bullet, Salvarsan or Arsphenamine, an organoarsenic compound that is effective in the treatment of syphilis.

Mycelial extracts of fungi are not (yet at least) a magic bullet for use in the control of honey bee viruses.