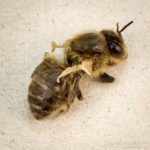 I’m very pleased to be speaking on the 24th of November (this Thursday) to members of the Helensburgh and District BKA. The talk will be at the rather splendid looking Rhu Parish Church at 7.15pm. The title of the talk is “Bees, viruses and Varroa: the biology and control of deformed wing virus (DWV)”. I’ll discuss aspects of the biology of DWV, particularly relating to its transmission by Varroa, and will then explore potential ways in which bees could be ‘protected’ using either high-tech or low-tech approaches. If you’re attending please introduce yourself when we’re all having a cuppa at the end of the evening … don’t leave it too late though, I’ve got a 2 hour drive home afterwards.

The drive from the east coast to Helensburgh was stunning, with a fantastic pink-tinged sunset lighting up the snow-covered hills around Crainlarich (Stuc a’ Chroin, Ben Vorlich and Ben Ledi). It was bitterly cold and clear.

Stuc a’ Chroin and Ben Vorlich …

There was a slight delay due to an absentee projector. During this we discussed oxalic acid-containing treatments for Varroa control and the problems caused by the lack of a ready-mixed preparation of Api-Bioxal. Once the projector arrived we were up and running and I covered viruses and Varroa, why we treat when we treat (or perhaps more correctly ‘when should we treat for maximum effect?’) and the influence of drifting and robbing on parasite and pathogen transmission between colonies. That’s quite a lot to get through in an hour … and I didn’t. The audience were rewarded for their patience with a well-earned cup of tea and a question and answer session.

The return trip was less visually pleasing other than a great view of a barn owl ghosting along the verges of the A977 near Rumbling Bridge. With thanks to Cameron Macallum and colleagues for their hospitality and a very enjoyable evening.