It’s cold and dark and all is quiet in the apiary. Hives appear somnolent. Colonies are clustered 1 and, other than the odd corpse or two on the landing board, I’ve not seen a bee for at least a fortnight.

Based upon previous experience I suspect colonies are – or very soon will be – broodless. I usually reckon that the first extended (2-3 weeks) period of cold weather 2 in the winter is the most likely time for the colony to be broodless.

In both instances, when the hives were checked, they had no brood.

What’s all this about being broodless?

If a colony is broodless there are no capped cells in which the Varroa mite can ‘hide’. As a consequence it’s an ideal time to apply a miticide like a trickled solution of Api-Bioxal 3.

There are very good reasons why a midwinter OA treatment is necessary, particularly if you treated early enough in the autumn to protect the overwintering workers from the ravages of Deformed Wing Virus (DWV). High DWV levels reduce the lifespan of bees and contribute to many (possibly most) winter colony losses. I’ve even suggested here that “isolation starvation” might actually be due to Varroa-transmitted viral disease. 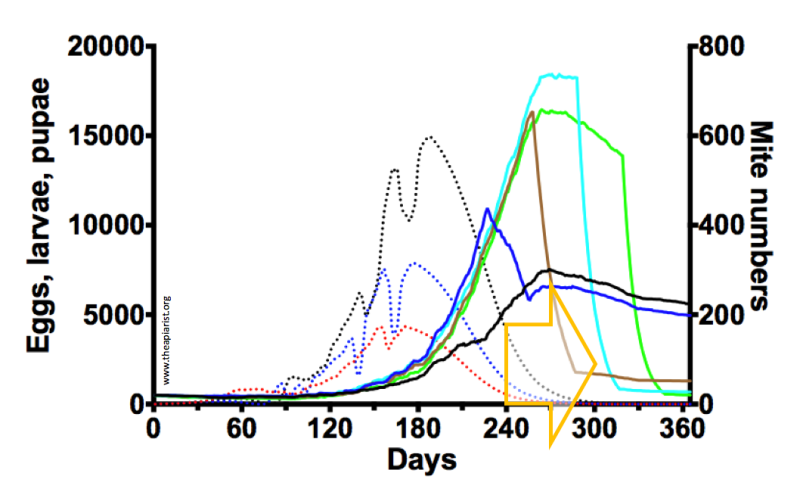 Early autumn treatment protects the winter bees but also leaves the long autumn for the residual mites to continue replicating.

And there will be residual mites. No treatment is 100% effective.

So, paradoxically, if you treated early enough in the autumn to really help protect the winter bees, your mite levels will be higher at the end of the year.

Which also means they’ll be higher at the beginning of next year.

Many beekeepers, for convenience, laziness or historical precedent, choose to apply the winter OA treatment between Christmas and New Year. I suspect that this is often too late. If the queen starts laying again around the winter solstice there will be sealed brood – and therefore unreachable Varroa – by the end of the month.

I’d prefer to have a cold and damp afternoon in the apiary slaughtering Varroa now than the convenience of treating them less effectively during the Christmas holiday period.

The latter might be more convenient … the office will be closed, I’ll be replete with turkey and sprouts and it will be a good excuse to ‘escape’ visiting relatives and yet more mince pies 4.

But is it the best time for your bees?

We have the technology

We have a couple of hives with Arnia hive monitors fitted 5. These have a temperature probe inserted into the brood nest. Brood rearing temperature is around 34°C. Here is a trace of one colony over the last month.

The colony temperature was pretty stable (around 33-35°C) until about the 19th of November and has dropped about 10°C since then. Although I’ve not opened the colony I think that this is additional evidence that the colony is broodless 6.

Keeping bees properly involves being aware of the seasons, the available forage and the state of the colony. This varies from month to month and year to year 7.

You can’t mechanically (‘by the numbers’) add supers on the 5th of May and harvest honey on the 15th of June. Sure, it might work some years, but is it the best time to do it?

Similarly, you can’t optimally treat a colony for Varroa on the 30th of December unless the climatic conditions and state of the colony coincide to make that the best time to treat.

It might be, but I suspect that generally it’s a bit late if there is a brood break.

If you’re going to the trouble of preparing the OA treatment, donning the beesuit and disturbing the colony you might as well do it at the right time for the bees.

I’ll be treating in between the predicted sleet showers and sunny periods this weekend.

Isn’t evolution a wonderful thing? This post started with a working title of “Know your enemy” and was on a different topic altogether. I’ll save that for next week.

The above was written at the beginning of the week. Now the weekend is closer it’s clear the weather is going to be cold with heavy snow predicted. Unless the forecast is wrong (and how often does that happen?!) I’ll hold off treating until a) it’s over 5°C, and b) the roads are safe.