With good Spring weather the first honey extraction of the year is usually timed for early June.

We’ve had wonderful weather in the east of Scotland this Spring. Unusually, colony build-up was in time to exploit the Spring nectar and several colonies ended up with at least three supers.

One of my two main apiaries is close to oil seed rape (OSR) fields and this was more or less finished by late May. OSR nectar has a high glucose content and readily crystallises. It’s therefore important to get the honey off before it sets rock solid in the frames 1.

Is the honey ready yet?

However, it’s also important not to remove the supers before the bees have capped off the comb, or at least reduced the water content below ~20% or there is a real risk that the honey will ferment in storage.

When adding new supers I always put them directly above the brood box. Therefore, in a stacked hive, the top super will be the oldest and the most likely to be capped and ready to remove. Lower down the frames may be partially capped. Usually you’ll find the frames in the middle of the box capped before the outliers.

During weekly inspections in late May I check the supers. If a frame is capped it’s ready. If it’s not and the nectar is dripping out when you turn the frame over then it’s definitely not ready.

You can test if uncapped frames are ready by giving them a sharp shake directly over the open super. If nectar drops are shaken out the water content is still too high. Sometimes you’ll find the majority of the frame capped with watery nectar at the very edges.

You don’t need to check every frame, or even every super. With widely spaced frames you can often clearly see they’re all capped. If you can’t you probably just need to check a central frame and one or two on the periphery.

Fully capped supers usually contain relatively few bees when compared to partially or uncapped frames. Therefore, if the super is fully capped it’s usually easy enough to shake the bees off each frames, transferring the frames to a spare super for transport.

However, supers like the one pictured above, are often covered in bees. The easiest way to clear these is to use a clearer board. These provide a ‘no-moving-parts-one-way-valve’ means of emptying the super of bees. The design I use has a thick lower rim, providing ample space for the bees that move down in the hive. If I’m clearing a tall stack of supers I’ll often add an empty super below the clearer rather than completely overcrowding the brood box. 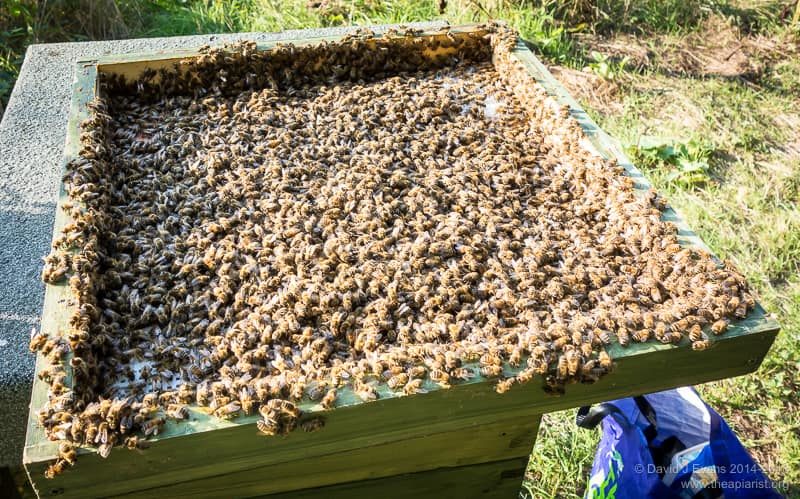 Removed and inverted clearer board …

Add the clearer board 2 and return the following day to remove the super(s) that are now nearly empty of bees. There are almost always a few stragglers 3.

Interestingly, I’ve noticed this year that there are more stragglers if the colony is queenless. I suspect that this might influence the movement of bees in the hive. This isn’t a scientifically controlled observation … just an “I’ve noticed” 😉

A defining feature of a good year in beekeeping is that you run out of equipment … frames, supers, split boards, roofs etc. With the exception of roofs (because I knock them up from Correx sheets for a couple of quid each) I’ve run out of all of these this year. 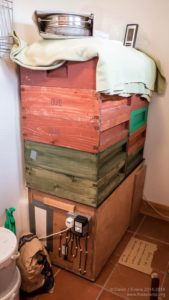 I therefore clear a few hives at a time. However, I like to do all my honey extracting in a single day (or weekend if it’s been a good year). This is mainly because I loathe the cleaning up afterwards 🙂

I therefore keep the supers warm until I’m ready to extract. My honey warming cabinet was designed to take 2 x 15kg buckets of honey (inside) or to allow two stacks of supers to be built on top of the open box.

By ensuring no gaps and adding some insulation (bubble wrap or an old blanket) on top I can set the element at ~40°C and the honey in the stacked supers is kept nice and warm 4.

This offers two very significant advantages. OSR honey takes longer to crystallise and the honey, being warm, is much easier to extract.

If the stack of supers is 6+ high I usually rotate them top to bottom, bottom to top every few days, and try and extract from the warmest supers first. This year I cleared supers over a 7-9 day period and extracted them all together.

A brief word of caution … full supers are heavy. Take care lifting them.

Out of interest I weighed some full cedar and poly supers and they each weighed 17-21kg (about 37-43lb). The weight difference isn’t just the weight of the box as the supers contained different numbers of frames, so I’m not comparing like with like. 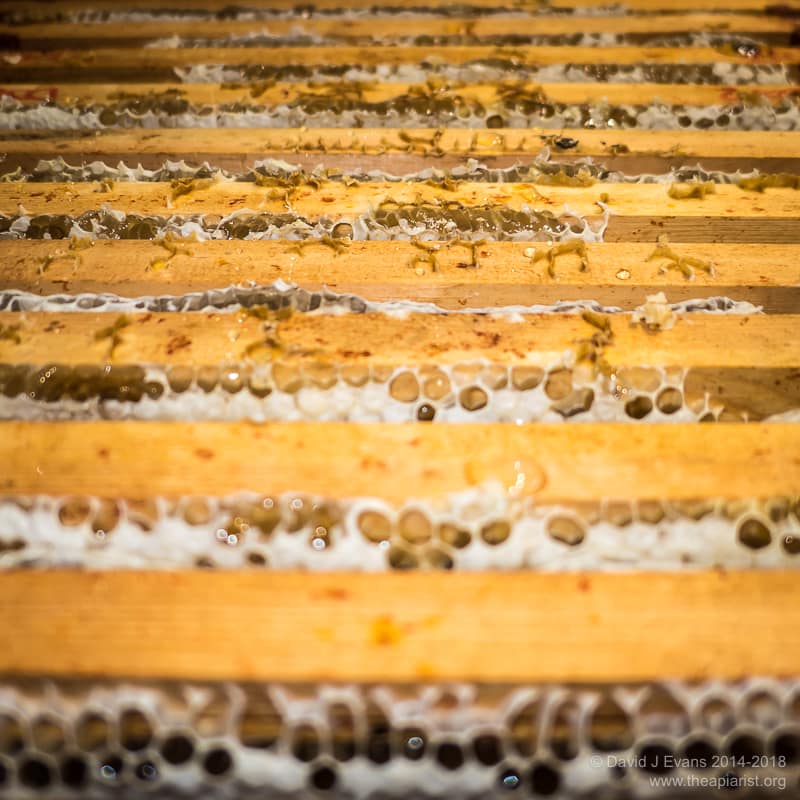 Beekeeping is hard work. If you extract just 10 supers, handling the boxes just five times each during the process (hive to car, car to house, house to warming cabinet to extractor and then back again) you’ll have moved about a metric tonne. You will move them more than this.

Beekeepers back is a very real problem.

And that’s before you handle individual frames during uncapping and loading the extractor. After a hundred full frames I get very sore hands doing this bit, let alone shifting all the full boxes.

Extracting honey is a bit of a chore.

It’s not even much fun writing about it … 😉

The first bucket or two is enjoyable 5, but the novelty wears off really fast. It’s noisy, repetitive, hot, hard work. Did I say it was repetitive?

I’ve reviewed my extractor previously. It works well and I try and look after it carefully. There’s lots of preparation and even more cleaning up afterwards.

I always run the extractor with the gate open, filtering honey directly through coarse and fine filters into 15kg buckets 6. Once a bucket is full I measure the water content with a refractometer and label the lid with the year/month, source apiary 7, the honey weight and the %age water.

Buckets get stored in a cool, stone-floored room. The honey sets and will keep more or less indefinitely until it’s needed for bottling. Where possible I use the buckets with the highest water content first.

Spring follows winter and precedes summer. However, the timing is variable and depends upon the hemisphere and whether you use meteorological or astronomical reckoning. In the US and UK it’s March, April and May using meteorological reckoning. However, there’s not much nectar collected here in the East of Scotland in March. Alternatively, using astronomical/solar reckoning Spring starts on the vernal equinox (~20th March) and ends on the summer solstice (which, conveniently, was yesterday … 😉 ).

Beekeepers might be better using a phenological or ecological estimation for the start of Spring, for example defined by the flowering of a particular range of plants.

Alternatively – and a whole lot easier to measure but much more difficult to predict – define Spring like Swedish meteorologists … “the first occasion on which the average daytime temperature exceeds zero degrees Celsius for seven consecutive days”. This means Spring will vary  with both latitude and elevation. Perfectly sensible and at the same time confusing 🙂