This is a follow up to the last post on Strong hives = live hives which was written in response to the oft-repeated mantra that ‘local bees are better adapted to the local environment’.

In that previous post a study of the overwintering survival of colonies headed by queens from very different locations was discussed. There was no difference whether the queen (and consequently all the workers she subsequently mothered) had come from Vermont or Florida.

Instead, the primary correlate of overwintering success was the strength of the colony 1 going into the winter.

Despite the size differences between the US and UK (or Europe), the honey bee population structure is actually more distinct on this side of the Atlantic.

In the USA the huge impact of migratory beekeeping causes considerable mixing of the bees on the continent. Those on the east and west coasts are distinct, but those in the north and south, or across smaller geographic scales, are really rather similar.

It’s not only commercial migratory beekeeping that enforces this, it’s also some of the very large-scale queen rearing operations. These ship queens all across the USA ensuring that there is less genetic diversity than you’d expect from the vast geographic (and climatic) differences.

So, perhaps the study I discussed last week was not particularly surprising after all … ? 2

In contrast to the US, beekeeping activities in the UK and Europe are rather more localised.

In the UK we still import thousands of queens, but we don’t move our hives across the continent – often more than once a season.

We might take a dozen hives to the heather moors 150 miles away, but we never take them 2500 miles to pollinate almonds.

Probably as a consequence of less large-scale migratory beekeeping, and less ‘centralisation’ of commercial queen rearing, there is genetic evidence for ‘local’ strains of bees in Europe.

In addition, there is evidence that these genetic differences result in changes to the individual proteins that the bee expresses … and that these may result in local ecological adaptations.

However, this still doesn’t get us to ‘local bees are better adapted to the local environment (and this explains why local bees survive better)‘ …

But there is even some evidence to support this last statement as well.

So let’s look at each of these points in turn 3.

Biologists use the terms genotype and phenotype to describe the genetic makeup of an organism and its appearance. Most beekeepers are familiar with the different phenotypes of honey bee – the dark ‘native’ bees, carniolans, Buckfast etc.

The phenotype is defined and determined by the genotype, but we don’t necessarily know which genes determine which physical characteristic. Population geneticists therefore often use different genetic features to discriminate between different groups or populations.

Microsatellites are DNA markers that contain variable numbers of short tandem repeat sequences. In honey bees, microsatellites are abundant and highly variable. They are therefore very useful for differentiating between populations or groups of populations, though how this is done is outside the scope of this post.

In a series of particularly impenetrable tables and phylogenetic trees they also demonstrate the the European lineages are genetically distinct and, importantly, that sub-populations could be readily identified 5.

Microsatellites are essentially non-functional genetic markers that we can use for analysis. They are carried alongside the thousands and thousands of genes that encode the proteins that make the wings, eyes, guts, feet etc. of honey bees. Other proteins also influence the behaviour of bees – how and when they swarm, their cold tolerance, there longevity.

We can now measure genetic variation of individual genes easily through so-called ‘next generation sequencing’ of the whole genome of the honey bee. However, the variation we see is one step removed from the variation at the protein level that directly influences how the bee copes in (or is adapted to) different environments.

But, it turns out, we can measure the variation at the protein level as well using a technique termed proteome profiling.

If distinct genetic populations of bees have adapted to particular environments (through selection, either natural or by beekeepers) we would expect the proteins they express – that both make the bee and determine its behaviour – should be different.

For example, simplistically, if a bee had evolved to live in a very windy environment we might expect the proteins forming the flight muscles would be stronger, enabling the bee to fly on windier days 6.

Collect the data, decipher what it all means …

Alternatively, you could turn the analysis around:

And, using proteome profiling, this is exactly what Robert Parker and colleagues reported in 2010 7. They compared proteins from adult bees sourced from geographically dispersed locations (Canada, New Zealand, Chile, USA). 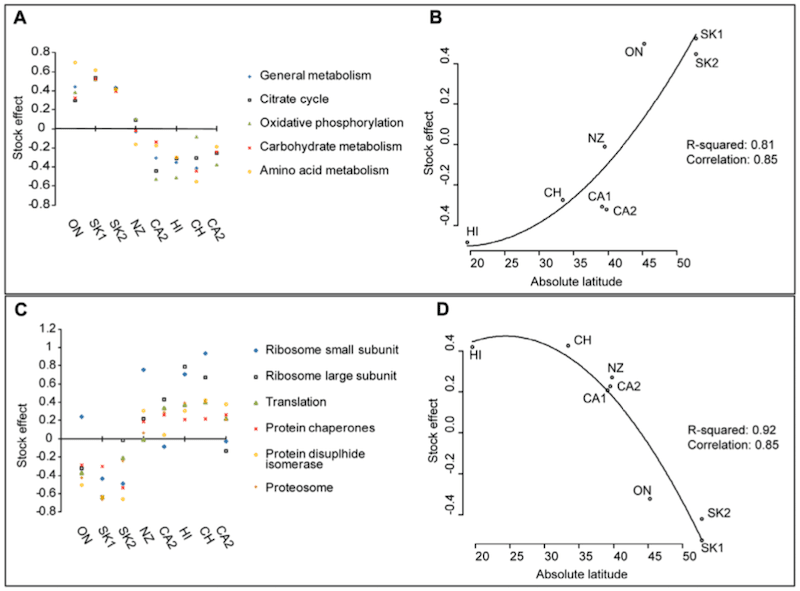 As far as we’re concerned here – which is evidencing that locally adapted bees are actually different from each other in a meaningful way – the precise differences Robert Parker and colleagues aren’t too important.

But … if you insist.

Importantly, distinct populations of bees from geographically-distant regions exhibit differences that, logically, could be expected to make them better adapted to that environment.

But, there’s a bit still missing …

The key phrase in that last sentence is ‘could be expected’.

What was not shown in these two studies is that the differences observed are responsible for the better performance or survival of those bees in those environments.

Which finally brings me to a study by Ralph Büchler entitled The influence of genetic origin and its interaction with environmental effects on the survival of Apis mellifera L. colonies in Europe 8.

This was an ambitious and large scale study of the survival of ~600 colonies in 21 apiaries in Europe. The colonies included 5 sub-species (carnica, ligustica, macedonia and mellifera) and 16 different genotypes of bees.

In each of the 21 apiaries a local genotype was tested in parallel with at least two non-local genotypes. The large team of scientists/beekeepers involved used standardised management protocols which excluded any form of disease management e.g. no control of Varroa or other diseases. Consequently (many) colonies were lost to Varroa and were removed from the study once infestation levels had reached 10% (i.e. 1 in 10 workers carried phoretic mites) or bee numbers dropped below 5000.

The study started in autumn 2009 and ended in March 2012. During this ~2.5 years 84% of the colonies perished. Almost half of these losses were attributable to Varroa … not a particular surprise.

There are a lot of variables in this study – sub-species (5), genotypes (16), apiaries (21) – so the statistics and analysis are a bit of a minefield.

Essentially the researchers ‘counted the corpses’ (i.e. colonies that died). They then looked at the survivors and tried to determine the characteristics they shared.

Unsurprisingly, survival of colonies in different apiaries was not the same. Graphed below is the percentage of colonies that survived (vertical axis) in each of the 21 apiaries against time (horizontal axis). 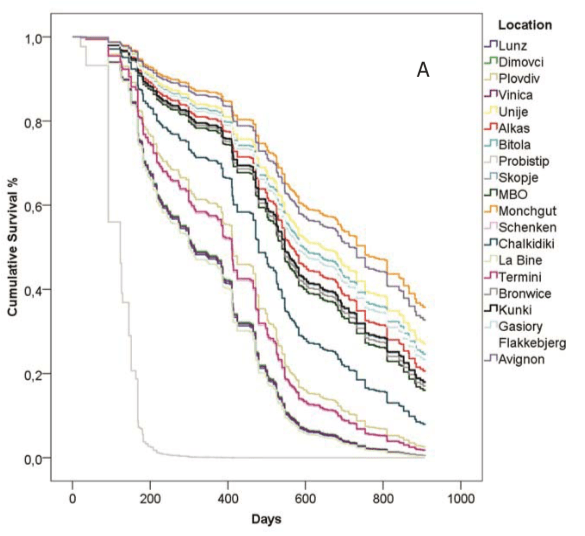 Trajectories of colony survival for the different locations.

These differences are presumably due to local forage availability, colony management, climate etc. We know that bees do better in some places than others 9.

When survival of different genotypes was compared they were much of a muchness, with two outliers. 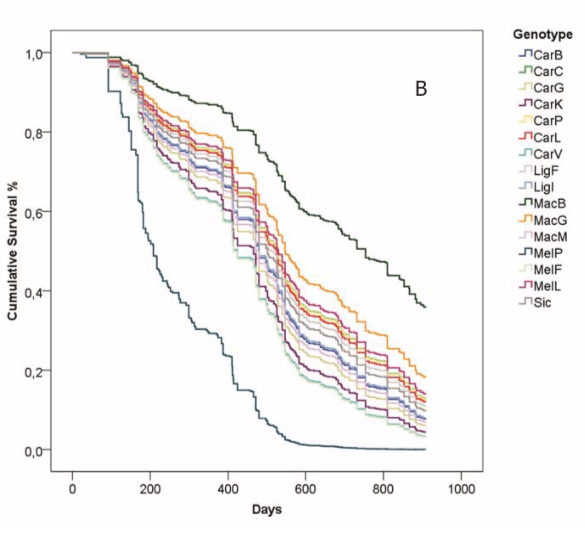 Trajectories of colony survival for the 16 different genotypes 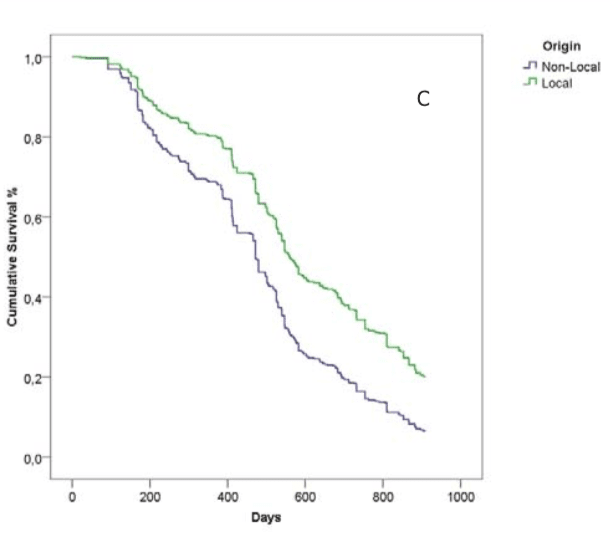 Trajectories of colony survival for the origin of the queens

Why do local bees survive better?

The differences between the two lines – local and non-local queens – in the Kaplan-Meier survival curve above may not look particular good … they both drop disconcertingly quickly, indicating lots of dead colonies.

The authors unequivocally demonstrate this statistically, but for beekeeping purposes it’s perhaps even more convincing to simply state that:

That’s a key quote from the paper. It also probably explains why colonies headed by local queen survive better.

In a follow-up paper to Büchler et al., 2014, the same authors did a more in-depth analysis of a range of colony parameters that correlated with survival 10 which contains an additional piece of the jigsaw explaining why colonies headed by local queens survived better.

And, by significantly higher, I mean ~20% higher.

Which finally completes the story and brings us back to the Strong hives = live hives from last week.

Local queens head up colonies that survive better in the local environment to which they (and their workers) are adapted.

There are a number of caveats to the ‘count the corpses’ study conducted by Büchler and colleagues.

For example, the local bees might have actually been adapted to the local beekeeping management practices. In future experiments there might be ways to control for this 11.

The absence of Varroa control meant colonies were always weaker in the second year of the study. For the majority of beekeepers this is not a sustainable way to manage colonies. A fourth year would have been impossible as they would have run out of colonies.

Nevertheless, under the conditions tested, this is confirmation that ‘local bees are better adapted to the local environment (and survive better)‘.

But as a scientist there’s always another ‘Why?’ question.

Why are the colonies stronger? Is it increased longevity of worker bees? Perhaps it is better foraging skills, meaning more brood can be reared? Is it an adaptation of the queen to the chemicals in the local pollen that increases her fecundity?

I can think of at least two additional compelling reasons why local bees and queens are preferable. I’ll cover these at some point in the future.