The new bee shed is in an apiary with space for about a dozen additional hives around it. The apiary is fenced and heavily sheltered from cold easterly winds by a convenient strip of woodland. However, the site is open and exposed to westerlies. These can whip in across the fields and their impact is exacerbated by the apiary being elevated on a small mound a few feet above the low lying – and often flooded – adjacent land.

The bees occupying the hives in the shed are protected from the full force of the westerlies by the shed itself, which is angled slightly to deflect the wind. However, those outside in the apiary get the full impact, and the wire mesh security fencing provides no shelter.

We’ve had one summer gale that lifted a few polystyrene hive roofs and caused a bit of damage. Better preparation might have prevented this; I should have heeded the weather forecast and strapped the hives to the stands.

The major problem isn’t gales though. Instead, it’s the impact of the wind on returning foragers and the irritation it causes the bees during inspections on a blustery day.

Several of the hives face west so the bees often approach the entrance downwind. They can get a real buffeting and often have to make repeated crash-landings and attempts to reach the hive entrance. 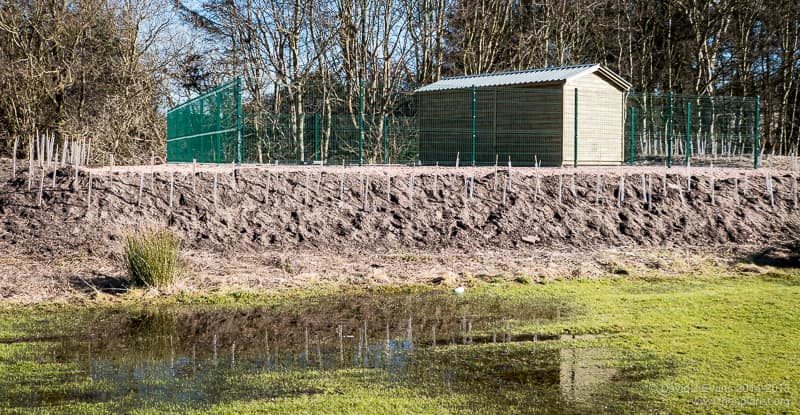 In marginal weather or on a cold day some inevitably get chilled and don’t make it back. The apiary has a compacted hardcore base and – unlike long grass – it’s easy to spot the bees ‘lost in action’.

Hive inspections are conducted from behind the hive. On a windy day – and it’s not always possible to inspect on calm days – the bees can show their disapproval when the crownboard is lifted. They’re not really aggressive, but can be a bit surly and are certainly less appreciative of the disturbance than those inside the shed.

It has become obvious that some additional shelter is needed.

As a long-term solution we’ve planted a double row of mixed native hedging plants (predominantly blackthorn but with a smattering of hazel, crab apples and dogwoods) mixed 1:2 with goat willow (Salix caprea). The latter is fast-growing and provides excellent early-season pollen at a time when colonies need it for brood rearing.

We planted 60-80cm ‘whips’, cut them back to ~35cm, wrapped them in perforated spirals to deter the rabbits and pretty-much left them to it. We’ve had a dry summer so have inevitably lost a few 1. However, the majority are now at or well above the spirals.

We didn’t – but should have – used old carpet tiles or cardboard squares as a weed suppressor around each plant. This was due to lack of preparation on the day and lack of organisation subsequently. The plants would undoubtedly have done better if they’d been given a bit of help competing with the surrounding weeds.

The intention will be to cut this hedging back so that it provides a light screen and an abundance of pollen, rather than letting it develop into an impenetrable barrier around the apiary.

We’ll let it grow for another couple of years and then start staggered pruning as required.

In addition, and a little further from the apiary, we planted more willow which we’ll allow to grow larger – though probably still coppice it periodically. This will help landscape the otherwise rather unattractive earth mound and help it merge better with the trees to the east.

Although willow is relatively fast-growing, it’s not fast enough to provide protection from this autumn’s westerlies. Using the security fence as a support we’ve therefore installed a 2m high netting windbreak around part of the apiary. 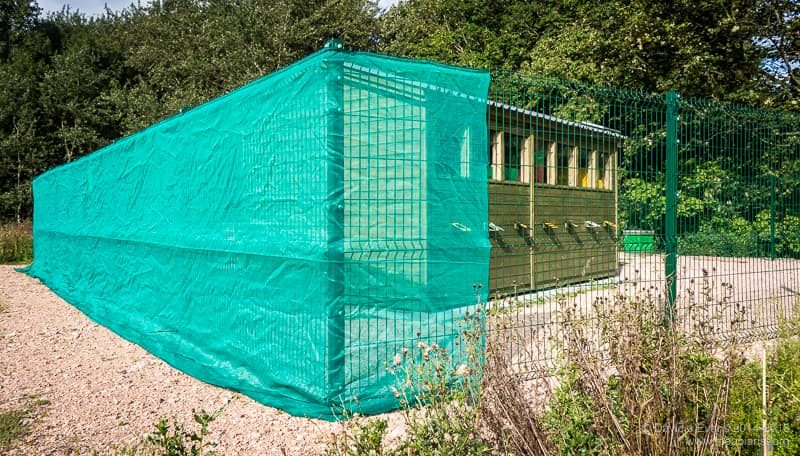 This netting was easily ‘zip’-tied to the fencing and is claimed to reduce windspeed on the lee side by 50%. From the outside – see above – it’s a bit of an eyesore. This is partly because the viewpoint is oblique and partly because it’s viewed against a dark backdrop.

And partly because it’s a bit ugly 😉

However, from inside the apiary – which is where I usually view things from – it’s far less obvious. We’ve had no strong winds since installing it but even with gentle westerlies the initial impression, in terms of the shelter provided, is positive. We’ll see how it performs in the winter gales.

The netting has the added advantage of forcing all the bees ‘up and over’ as they exit the apiary, making them even less of a problem to passers-by 2. The security fencing has ~15x5cm rectangular ‘holes’ in it and already forced most of the bees to fly above head height, but the addition of the netting reroutes them all.

I’ve previously discussed urban beekeeping and suggested engineering the flight lines of foragers by facing the hives up against a fence. As an alternative I’ve seen hives in a back garden encircled by a tall mesh net 3 that forced the bees up about ten feet before they set off foraging.

The view from the west …

Shelter from the storm is the title of track on the 1975 studio album Blood on the Tracks by Bob Dylan – Nobel Prize in Literature 2016 and University of St Andrews Honorary Doctorate in Music 2004. Widely regarded as being one of his greatest albums 4 it has been interpreted as recounting the turmoil in his life due to estrangement from his wife Sara. Although – perhaps inevitably – Bob Dylan has denied this, his son Jacob said it was “my parents talking”.