Diutinus is Latin for long-lasting.

Diutinus bees are therefore long-lasting bees. These are the bees that, in temperate regions, maintain the colony through the winter to the warmer days of spring.

I’ve discussed the importance of these bees recently., and I’ve regularly made the case that protecting these ‘long-lived’ bees from the ravages of Varroa-vectored viruses is critical to reduce overwintering colony losses. 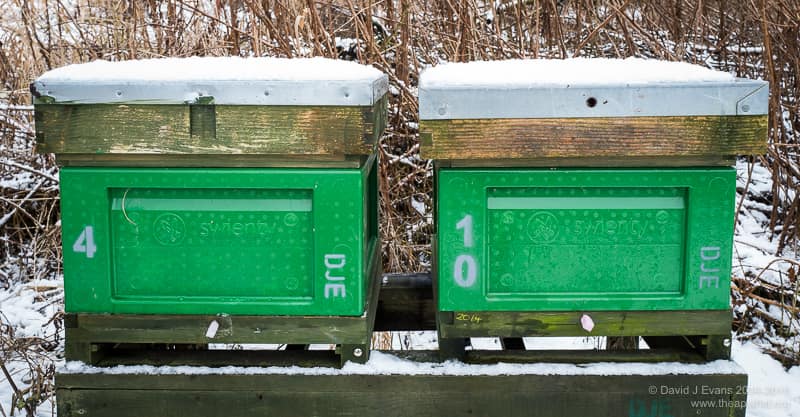 In most cases the adjective diutinus is replaced with ‘winter’, as in winter bees; it’s a more familiar term and emphasises the time of year these bees are present in the hive. I’ll generally use the terms interchangeably in this post.

Diutinus does not mean winter

From a scientific standpoint, the key feature of these bees is that they can live for up to 8 months, in contrast to the ~30 days a worker bee lives in spring or summer. If you are interested in what induces the production of long-lived bees and the fate of these bees, then the important feature is their longevity … not the season.

Furthermore, a proper understanding of the environmental triggers that induce the production of long-lived bees might mean they could be produced at other times of the season … a point with no obvious practical beekeeping relevance, but one we’ll return to in passing.

It’s worth emphasising that diutinus bees are genetically similar to the spring/summer bees (which for convenience I’ll refer to as ‘summer bees’ for the rest of the post). Despite this similarity, they have unique physiological features that contribute to their ability to thermoregulate the winter cluster for months and to facilitate spring build-up as the season transitions to spring.

The graph below shows the numbers of bees of a particular age present in the hive between the end of August and early December.

Each distinct colour represents bees reared in a particular 12 day ‘window’. All bees present before the 31st of August are blue. The next 12 day cohort of bees are yellow etc. The area occupied by each colour indicates the number of bees of a particular age cohort.

Note that egg laying (black) is negligible between early October and late November when it restarts.

For example, about 95% of the blue bees have disappeared by December 1. Of the yellow bees, which first appeared in mid-September, about 33% are present in December. Finally, the majority of the lime coloured bees, that first put in an appearance in early October, are present at the end of December.

Note that each cohort emerge from eggs laid 24 days earlier. The orange cohort emerging from 24/09 to 05/10 were laid within the first two weeks of September. This emphasises the need to treat early to reduce mite levels sufficiently to protect the winter bees.

Before we consider what triggers the production of diutinus bees we need to discuss how they differ from summer bees, both nurses and foragers.

Other than being long-lived what are their characteristics?

The four key physiological factors to be considered are the levels of juvenile hormone (JH), vitellogenin (Vg) and hemolymph proteins and the size of the hypopharyngeal gland (HPG).

As summer nurse bees transition to foragers the levels of JH increases and Vg decreases. This forms a negative feedback loop; as Vg levels decrease, JH levels increase. Nurse bees have high levels of hemolymph proteins and large HPG, the latter is involved in the production of brood food fed to larvae.

So if that describes the summer nurse bees and foragers, what about the winter bees?

Winter bees differ from nurse bees in being long lived. A nurse bee will mature into a forager after ~3 weeks. A winter bee will stay in a physiologically similar state for months.

There have also been time course studies of JH and Vg levels through the winter. In these, JH levels decrease rapidly through October and November and are at a minimum in mid-January, before rising steeply in February and March.

As JH levels rise, levels of Vg and hemolymph proteins decrease and the size of the HPG decreases i.e. as winter changes to early spring winter bees transition to foragers.

Now we know what to look for (JH, Vg levels etc) we can return to think about the environmental triggers that cause these changes.

In temperate regions what distinguishes winter from autumn or spring?

Temperatures are lower in winter.

Daylength (photoperiod) is shorter in winter.

There is less pollen and nectar (forage) available in winter.

Under experimental conditions it’s quite difficult to change one of these variables without altering others. For example, shifting a colony to a cold room (i.e. lowering the ambient temperature to <10°C) leads to a rapid decrease in JH levels (more winter bee-like). However, the cold room was dark, so perhaps it was daylength that induced the change? Alternatively, a secondary consequence of moving the colony is that external forage was no longer available, which could account for the changes observed.

Reducing photoperiod alone does induce some winter bee-like characteristics, such as increases in the protein and lipid content of the fat bodies. It also increases resistance to cold and starvation. It can even cause clustering at elevated (~19°C) temperatures. However, critically, a reduced photoperiod alone does not appear to make the bees long lived.

Remember also that a reduced photoperiod will limit foraging, so reducing the nutritional status of the colony. This is not insignificant; pollen trapping 2 in the autumn accelerates the production of winter bees.

But again, this may be an indirect effect. Reduced pollen input will lead to a reduction in brood rearing. Feeding pollen to broodless winter colonies induces egg-laying by the queen.

One of the strongest clues about what factor(s) induces winter bee production comes from studies of free-flying summer colonies from which the brood is removed. In these, the workers rapidly change to physiologically resemble winter bees 3.

How does the presence of brood prevent the generation of diutinus bees?

There are some studies which demonstrate that the micro-climate generated in the colony by the presence of brood – elevated temperature (35°C) and 1.5% CO2 – can influence JH levels.

Brood pheromone also contributes to a enhancement loop; it induces foraging which results in increased brood rearing and, consequently, the production of more brood pheromone.

One way brood pheromone induces foraging is by speeding the maturation of middle-aged hive bees into foragers. Conversely, when raised in the absence of brood, bees have higher Vg levels, start foraging later and live longer.

But it’s not only brood that produces pheromones.

Workers also produce ethyl oleate, a pheromone that slows the maturation of nurse bees, so reducing their transition to foragers.

A picture is worth a thousand words

All of the above is quite complicated.

Individual factors, both environmental and in the hive, have direct and indirect effects. Experimentally it is difficult to disentangle these. However, Christina Grozinger and colleagues have produced a model which encapsulates much of the above and suggests how the production of winter bees is regulated. 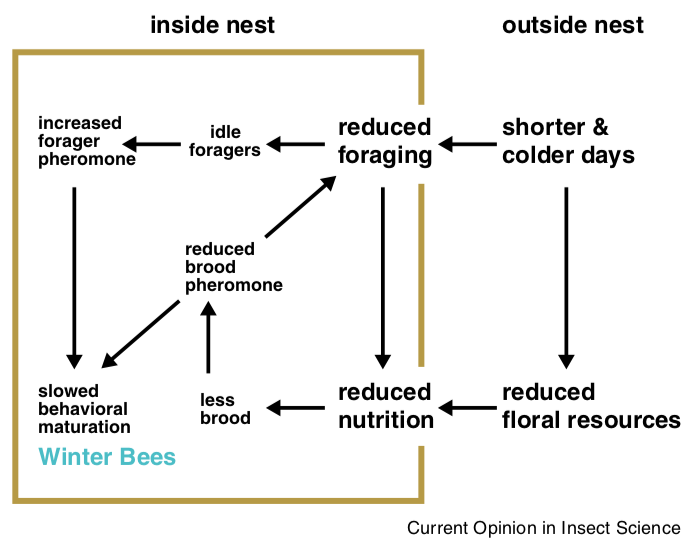 Proposed model for regulation of production of winter bees.

During autumn there is a reduction in forage available coupled with a reduced daylength and lower environmental temperatures. Consequently, there is less foraging by the colony.

Since more foragers are present within the hive, the nurse bees are exposed to higher levels of ethyl oleate, so slowing their maturation.

There’s less pollen being brought into the colony (reduced nutrition), so brood production decreases and so does the level of brood pheromone. The reduced levels of brood pheromone also reduces nurse bee maturation.

As shown in the diagram, all of these events are in a feedback loop. The reduction in levels of brood pheromone further reduces the level of foraging … meaning more foragers are ‘at home’, so increasing the effects of ethyl oleate.

All of these events have the effect of retarding worker bee maturation. The workers remain as ‘nurse-like’ long-lived winter bees.

The difference between nurse bees and winter bees is their longevity … or is it?

In the description above, and in most of the experiments conducted to date, the key markers of the levels of JH, Vg and hemolymph proteins, and the size of the HPG, are what has been studied.

I’d be astounded if there are not many additional changes.

Comparison of workers and queen bees have shown a large range of epigenetic changes induced by the differences in the diet of young larvae 4. Epigenetic changes are modifications to the genetic material that change gene expression.

I would not be surprised if there were epigenetic changes in winter bees, perhaps induced by alteration of the protein content of their diet as larvae, that influence gene expression and subsequent longevity. Two recent papers suggest that this may indeed happen; the expression of the DNA methyltransferases (the enzymes that cause the epigenetic modifications) differs depending upon the demography of the colony 5 and there are epigenetic changes between the HPG in winter bees and bees in spring 6.

Clearly there is a lot more work required to fully understand the characteristics of winter bees and how they are determined.

It’s worth emphasising that the local environment (forage and weather in particular) and the strain of the bees 7 will have an influence on the timing of winter bee production.

Last week I discussed a colony in my bee shed that had very little brood on the 2nd of October (less than one side of one frame). When I checked the colonies last weekend (11th) there were almost no bees flying and no pollen coming in. A colleague checked an adjacent colony on Monday (13th) and reported it was completely broodless. These bees are ‘local mongrels’, selected over several years to suit my beekeeping.

In contrast, my colonies on the west coast are still busy. These are native black bees. On the 14th they were still collecting pollen and were still rearing brood.

The calendar dates in the second figure (above) are therefore largely irrelevant.

The transition from summer bees to the diutinus winter bees will be happening in your colonies, sooner or later. I suspect it’s already completed in my Fife bees.

Whether genetics or environment has a greater influence on winter bee production remains to be determined. However, I have previously described the good evidence that local bees are better adapted to overwintering colony survival.

To me, this suggests that the two are inextricably linked; locally selected bees are better able to exploit the environment in a timely manner to ensure the colony has the winter bees needed to get the colony through to spring.