Following the Wild Bees† by Tom Seeley is an entertaining little book that would make an ideal Christmas present for a beekeeper. It describes the methods used to locate feral colonies (or any colonies actually) by bee hunting or bee lining, so called because you follow the line or direction they return to the colony from a nectar source you provide. It’s an ideal Christmas book for two main reasons; it’s a summer activity, so will remind the reader that balmy sunny days will – finally – replace the cold, dark days of winter and, secondly, it will allow the enthusiast the time to build the essential two-chambered ‘bee lining box’ which is used to trap, feed and mark the bees being ‘lined’.

I don’t intend to provide a précis of the method … you should buy and read the book for that. However, as a taster, you can visit the companion website to the book or watch a short video of Tom Seeley bee hunting …

Tom Seeley is a Professor in the Department of Neurobiology and Behaviour at Cornell University. He is a highly respected entomologist and, unlike many scientists, writes in an engaging and accessible manner. He explains complicated experiments in layman’s terms and makes parallels between his observations on honey bees and wider societal issues. Anyone who has read his book “Honeybee Democracy” will appreciate how simple and elegant his description of the science is.

His explanation of bee hunting is no less clear. Following the Wild Bees is really a ‘how to’ guide, rather than a popular science book, though each chapter does contain a separate section on the science behind the ‘how to’, together with lots of anecdotes. The book is subtitled “The craft and science of bee hunting”. If you’re not aware of feral colonies in your own area this book might help you find them … however, if you live in an area with lots of other beekeepers it will probably just help you find their apiaries (and you can also do that with Google maps). 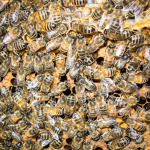 The feral bees Catherine studied had much higher levels of deformed wing virus (DWV), both indicative of – and as would be expected of – uncontrolled Varroa infestation. Therefore, whilst it might appear appealing to have colonies of wild bees in the local church tower they’re almost certainly riddled with DWV and Varroa. This presumably explains why so many of the feral colonies Catherine analysed died during the study period (2.5 years). The swarms lost by beekeepers (that occupy the church tower for example) quickly succumb to the detrimental effects of uncontrolled Varroa replication and the consequent transmission of viruses. Furthermore, through the activities of robbing and drifting that feral colony is likely to act as the generous donor of viruses and mites to the local managed beekeepers hives.

Perhaps not so appealing after all.

I recommend you read Following the Wild Bees. Do so sitting in front of a roaring log fire in mid-winter. Plan and build a ‘bee lining box’ (or buy one) and consider where you might go prospecting for ‘wild’ bees once the long summer days return.

But also plan to put out bait hives to catch swarms (yours or others) and clip your queens … every one ‘lost’ is an opportunity to establish a future source of Varroa and virus infestation. 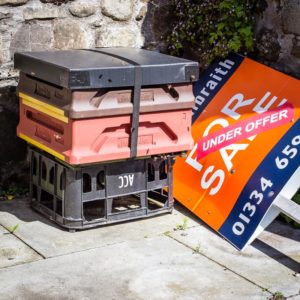