I’ve done less beekeeping this year than any time in the past decade. The Covid-19 lockdown enforced changes to the way we live and work, meaning my contact with the bees has been ‘big and infrequent’ rather than ‘little and often’.

‘Big and infrequent’ meaning a day or three of intense activity every month or so. I’ll write about this once the season is over as it has meant that the season has, in many ways, been very unrewarding … 🙁

… but nevertheless quite successful 🙂

With the season winding to a close, now is the time to remove the supers of summer honey and prepare to feed the colonies for winter.

Which means a couple of days of very heavy lifting.

I buy fondant in bulk as it stores well until it is needed. This year ‘bulk’ meant over 400 kg which, based upon this recipe, is enough for over 23,000 iced ‘finger’ buns 1. That’s too much to fit in my car (fondant or finger buns 😉 ), so entailed two trips and manhandling the boxes twice – from the pallet to the car and from the car to the shed. 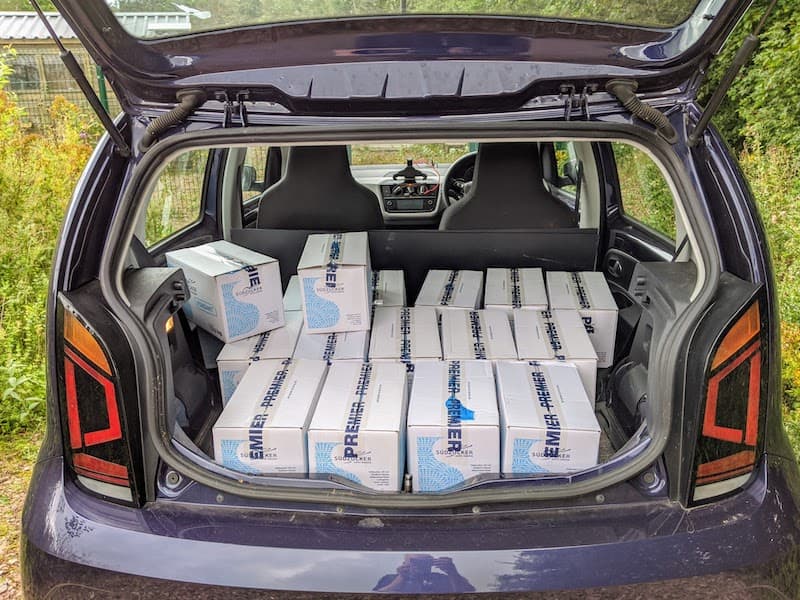 Load 1 of 2 … there’s more in the passenger footwell!

During all that lifting and carrying I focus on the thought that fondant has a lower water content than syrup (~78% sugar vs ~60% for syrup) so I need to feed less weight to get the same amount of sugar into the hive.

And there’s no preparation needed or fancy (expensive) feeders to store for the rest of the year.

But after a dozen or two blocks, also very heavy 🙁

There’s a bittersweet irony to the honey harvest.

The more backbreakingly exhausting it is, the better it is.

Not so much “there’s no gain without pain” as “the more pain, the more gain”.

I have two main apiaries about 15 miles apart in Fife. I checked the hives in the first apiary and was disappointed to find the supers were mostly empty. This is a site which usually has good summer forage. The OSR had yielded well in the spring, but the colonies had then all had pre-emptive splits for swarm control, before being united back prior to the main flow.

Which appears not to have happened 🙁

I put clearers on the hives and returned the following day to collect a pathetically small number of full supers. There were some uncapped and part-filled frames, some of which contained fresh nectar 2 which I pooled together in the smallest number of supers possible.

I placed these above the floor but underneath the brood boxes.

This is termed nadiring, which isn’t actually a real word according to the OED. Nadir means the lowest point, but in the 17th Century (now obsolete and probably only used by beekeepers) nadir meant a point directly beneath an object.

The hope and expectation here is that the bees will find the stores beneath the cluster and move it up into the brood box, prior to me treating and feeding them up for winter. 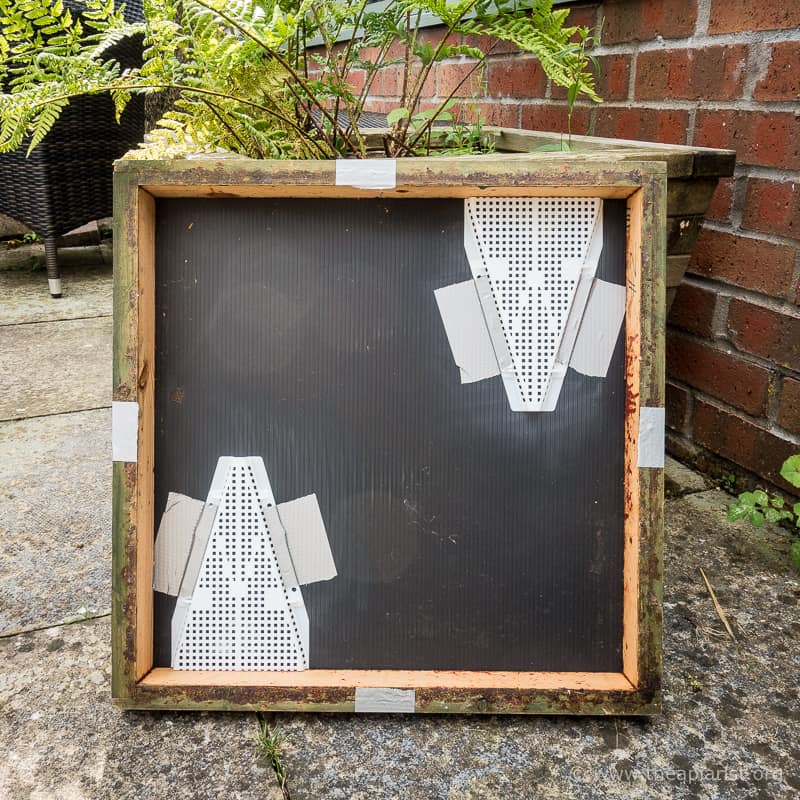 On the same day I placed clearers underneath the (much heavier) supers in my second apiary. Actually, under about half the hives as I don’t have enough clearers for all the hives at once, even with a few Correx and gaffer tape bodged efforts to supplement them (shown above).

I’ve discussed these clearers previously. With no moving parts and a deep rim on the underside the bees move down quickly. It’s not unusual to find the full 5cm depth full of bees the following morning. 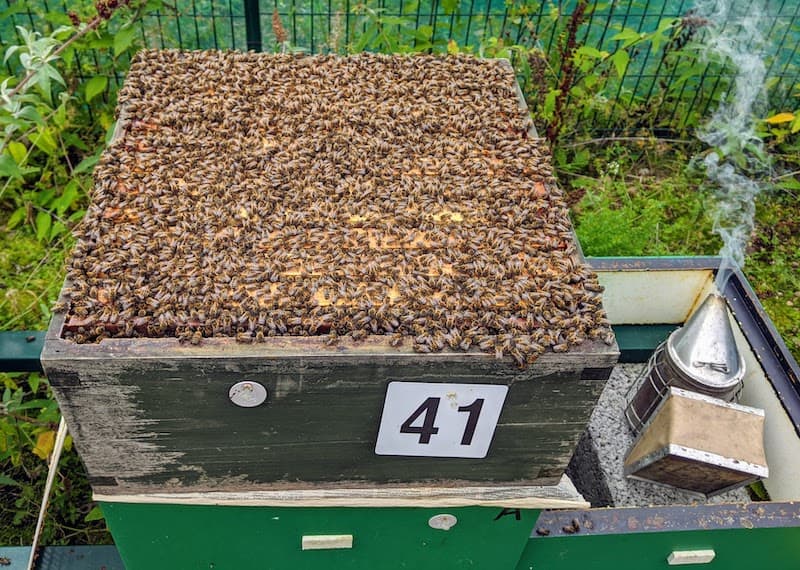 These bees have to be gently shaken back into the hive before replacing the crownboard and roof. This is easy on a calm, warm day with placid bees, but can be a little traumatic for everyone concerned if those three key ingredients are missing.

Filled supers usually weigh between 37 and 50 lb (17-23 kg) each 3. Therefore, moving a dozen from the hives to the car and the car to the honey warming cabinet involves manually lifting about half a metric tonne.

And that doesn’t include shaking off the few remaining bees which remain on individual frames. It’s not only my back that aches after this, but my fingers as well. Beekeeping, not such a gentle art as some might think.

I’ve previously noticed that more bees tend to remain in the supers if the colony is queenless.

This year the only queenless colony I found was also honeyless 🙁

There was no need for the bees to remain in the supers … and no real evidence they’d been there in the first place.

This colony had a late queen mating fail (or perhaps lost on a mating flight) so I’ll unite it with a strong colony at the same time as I feed them and treat them for mites.

There’s obviously no point in feeding and treating before uniting or I’d jeopardise the reputation some beekeepers (including me 😉 ) have for being incredibly financially astute.

While shaking bees off one frame a lug broke. It’s a lovely frame of capped lime honey. Not close to show quality but pretty respectable all the same. I could scrape it back to the mid-rib and filter the honey or cobble together some sort of nail in place of the lug so I could spin it in the extractor. Instead I’m going to give it to friends who love honey direct from the comb … I’ll let them work out how to hang or stand it at the breakfast table.

The recovered supers were stacked on my honey warming cabinet set to 40°C. By the time heat losses are taken into account this maintains the supers at about 35°C, making the honey much easier to extract.

I usually rotate the stacks top to bottom and bottom to top a day before extracting. More lifting 🙁

Back in the apiary, the freed up clearers were placed under the supers on the remaining hives for collection the following day.

Storm Francis only really arrived on the east coast of Scotland on Tuesday. It was windy and wet, but nothing like the pounding west Wales received.

However, on early Tuesday morning when I arrived at the apiary it was wet.

There are few more demoralising sights than an apiary in really grey, wet and miserable conditions. 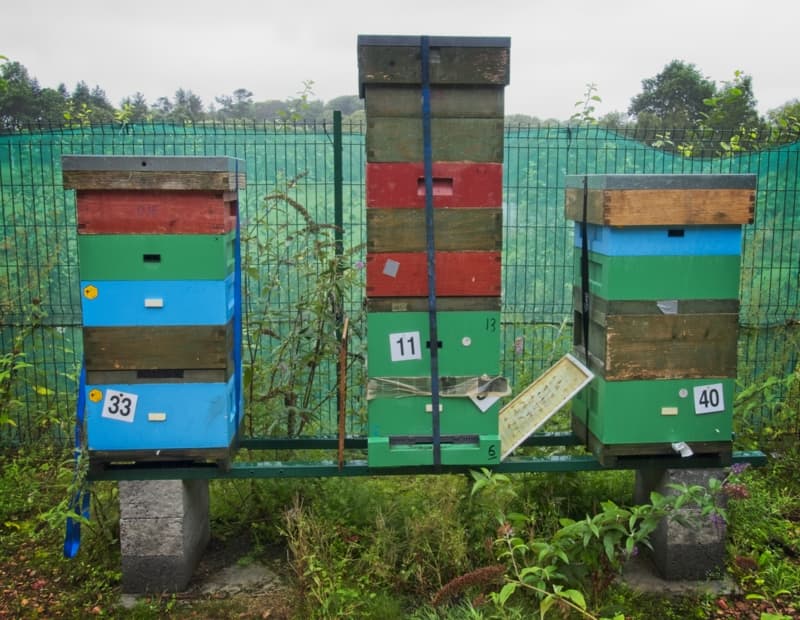 It was wetter and more miserable than this photo suggests …

There’s work to do and hives to open. Every single bee is ‘at home’. You know you’re going to get wet. It’s too blustery to use an umbrella and, anyhow, social distancing means there’s no-on there to hold one. 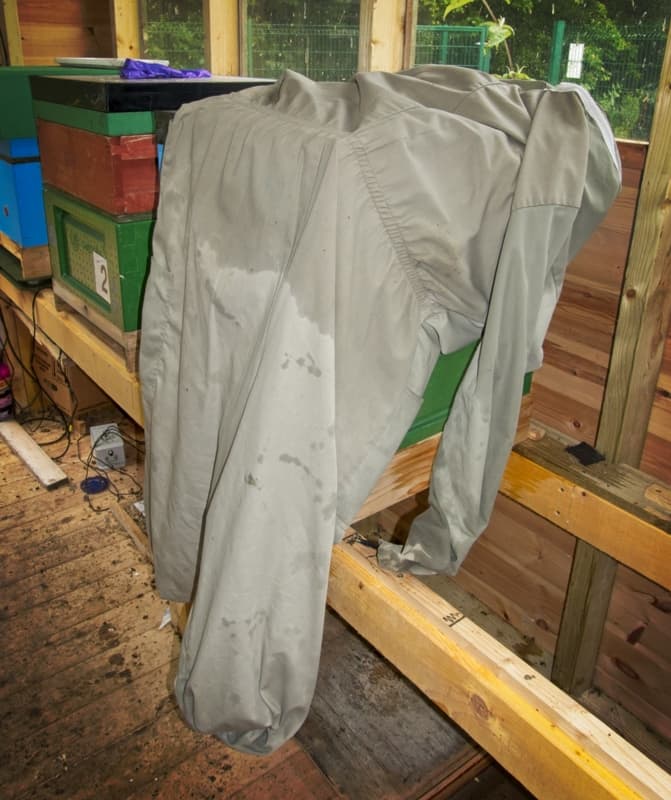 The one saving grace is that the bees were incredibly calm.

I’d like to think they’ve been selectively bred over the years to be placid and well behaved, and that my skills as a beekeeper have been honed to the point where they barely know I’m there.

Joking aside, these bees are calm and well behaved. Despite the flow being effectively over they haven’t become defensive. The majority of the colonies are very strong and they’re not being troubled by wasps, though these are searching out spilt honey and stores wherever possible.

Our colonies in the bee shed are used for research and used to provide larvae and pupae for experiments. Members of my research team harvest brood when needed and, because they aren’t hugely experienced beekeepers, it’s important that the bees are not stroppy.

During the week I commented to a friend that I didn’t think I’ve been stung all season.

There may have been one of those glancing blows to a nitrile glove, but nothing that actually caused any pain or inconvenience.

Partly this is because I’ve done less beekeeping, but it also reflects repeated replacement of queens from stroppy colonies with selected calmer bees over past seasons.

Aggressive bees do not collect more nectar. They are a menace to non-beekeepers and thoroughly unpleasant to work with. Fortunately, aggression is a relatively easy trait to select against and you can quickly see an improvement in colonies over just a couple of seasons.

Of course, I spoke too soon …

I lifted the lid on a stack of boxes containing old brood frames for melting down. To my complete surprise and considerable pain, I was greeted by a frenzied blitzkrieg of angry wasps.

Five stings in less time than it takes to say it.

The final BANG was self inflicted as I hit the side of my head to try and squish a wasp before it burrowed into my ear and stung me.

Partial success … I crushed the wasp, but only after it had stung me on the cartilaginous pinna of my ear 🙁

I don’t know which hurt more … the sting or the blow to the side of my head.

These days I no longer bother setting wasp traps in my apiaries, instead relying on strong colonies (and reduced entrances or kewl floors) for defence. However, I’ve discovered that a strong washing up detergent spray is a good deterrent if wasps are getting into stacks of stored boxes. Spray the stripy blighters, stand back and let it do its work before blocking access with whatever you have to hand 4.

After about four days of intense beekeeping I’d removed all the supers, extracted the honey, collected the fondant, fed and treated all the colonies.

I’ll deal with feeding and treating next week (if I remember) but now need to rest my weary back and fingers … over the week I estimate I’ve lifted a cumulative total of 1200 kg of fondant and at least the same amount again of supers.

The hives are now busy chucking out drones so they have fewer mouths to feed over the winter. 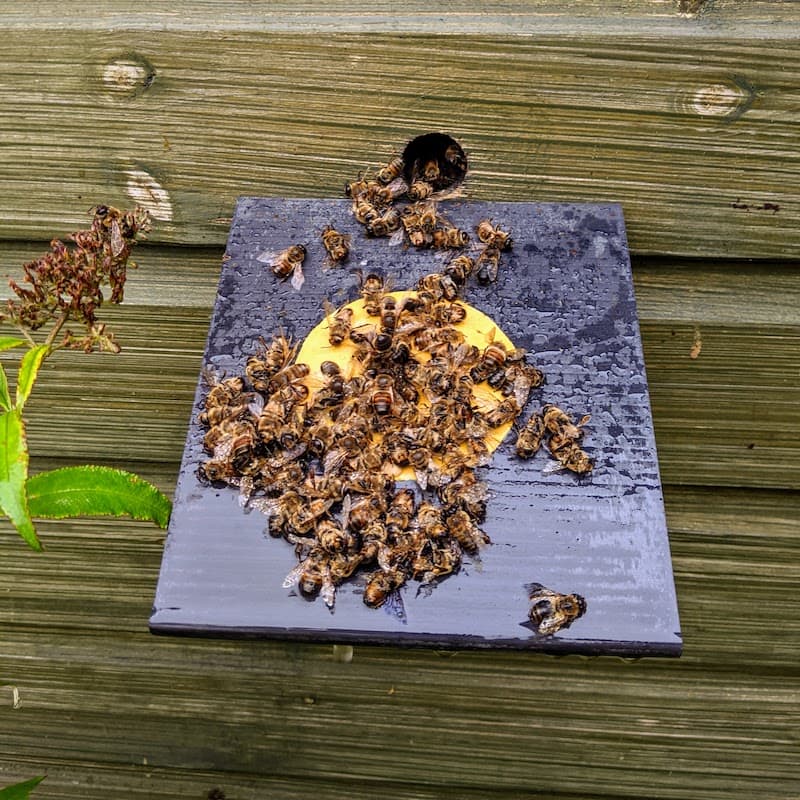 But to end on a more uplifting note, the honey crop was pretty good this summer 🙂