Synopsis : Mini-nucs are a good way to get queens mated. They are inexpensive, use few resources and are relatively straightforward to use. This post describes the basic features and use of mini-nucs for mating in miniature.

Mini-nucs are the small hives some beekeepers use for queen mating.

Pedantically, queen rearing could be considered the generation of queen cells with – in due course – the production of virgin queens. However, it’s a rather pointless exercise if it’s not also followed – in pretty short order – by queen mating.

A queen needs the support (and probably encouragement!) of a colony of some sort while she becomes sexually mature, goes on her orientation and mating flights, packs her spermathecae and then starts laying eggs.

The hive can be anything from a full-sized double-brood colony, possibly containing over 40,000 bees, to a container no larger than two egg boxes primed with 300 ml (perhaps no more than 1000) of bees.

Clearly, dedicating a full colony for queen mating (unless she is destined to stay in the same box of course) is resource-intensive and impractical. For this reason most beekeepers who rear more than a very few queens will use smaller hives for queen mating.

Even using 4-6 frame nucleus colonies for queen mating is very demanding of resources; each needs to be started with a frame or two of emerging brood and the adhering bees and a frame of stores, possibly with some additional bees shaken in on top. Getting half a dozen queens mated in these ‘full-sized’ nucs might requires ‘gutting’ two complete colonies 1.

But you don’t need to use a full-sized nuc … with care you can scale things down … a lot.

How mini is a mini-nuc?

When I started beekeeping the hive choice for queen mating was either a ‘full-size’ 5 frame nuc or the mini-nucs manufactured by Apidea or Kieler (the latter are sometimes sold as Warnholz mating hives). 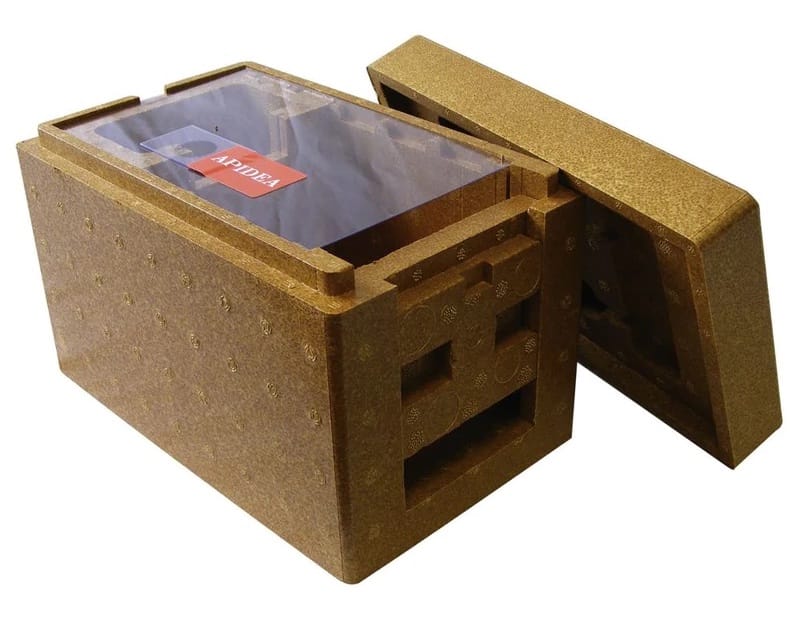 I’ve used Kieler’s for years. They are the only type I own … largely because they were appreciably cheaper than Apidea’s. Were and are … a Kieler costs about £22 and the Apidea is £36 2.

Since I started (which wasn’t that long ago) the choices have proliferated. There are now a plethora of plastic or polystyrene equivalents to Apidea’s or Kieler’s. Some may be better, some may be worse. Many are less expensive (at least than an Apidea).

I’m sure all can be made to work and the general principles I discuss below probably apply to the majority of these true mini-nucs (and any number of homemade equivalents). Note that both Kieler’s and Apidea’s can be extended by the addition of a second story which are really needed for overwintering queens in these small boxes. If you aspire to try that, make sure whatever make you choose is extendable. 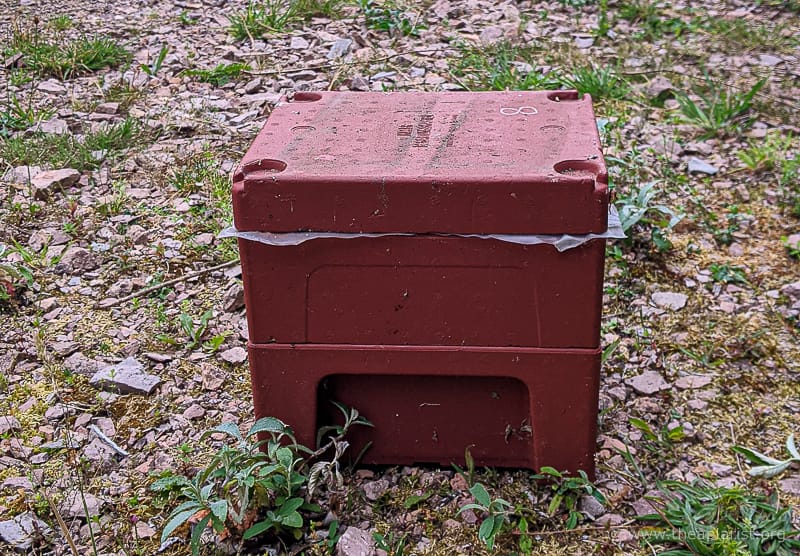 Kieler with ‘upper storey’ added … not so mini now

In addition to these mini-nucs there are now hives that take frames about 15 cm square, or homemade versions using half-size super frames in a super divided four ways. None of these are really mini-nucs. I’ve no real experience of them and so can’t talk about their pros and cons. Friends who have them tend to rave about how good they are, but I’ve too much incompatible equipment already and can’t justify their additional cost (they can be three times the price of a Kieler).

I have a love-hate relationship with my mini-nucs.

However, it’s not all good news. There’s a lot to dislike about mini-nucs as well, this includes …

When I lecture or teach queen rearing for beginners I recommend using 5 frame nucs until you can produce good queen cells reproducibly and as needed. Then try some mini-nucs …

Whatever the make, all mini-nucs are used in broadly the same way.

The empty box contains 3-4 frames, often just consisting of a topbar and a starter strip, and a compartment for food. You can fill the latter with syrup or fondant (or damp granulated sugar). It’s worth noting that some manipulations of these little boxes may require them to be inverted at the start, so you either need to add syrup later or use fondant. 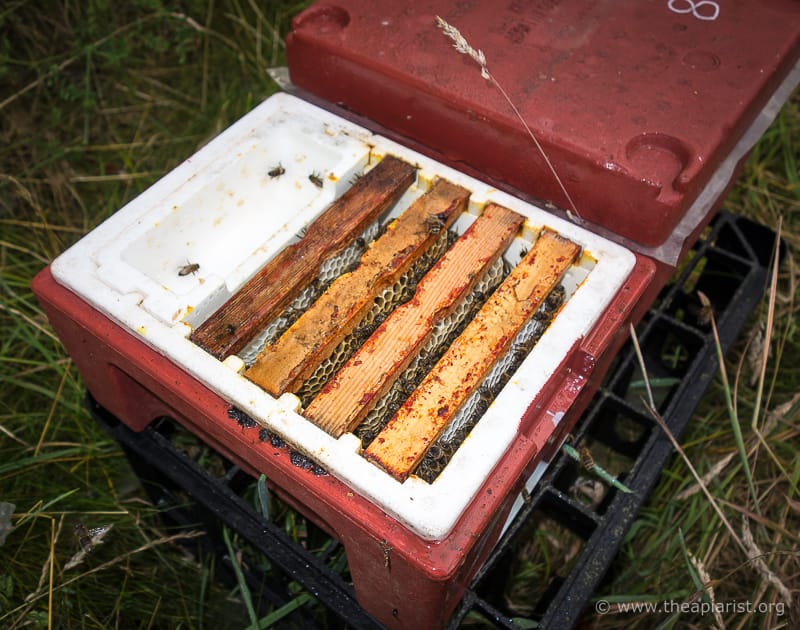 A cup full (perhaps 250 ml to 300 ml) of bees is added to the mini-nuc and left for a few hours (at least) so that the bees realise they are terminally queenless. You then add a near-to-emergence queen cell, or run a virgin queen in through the entrance.

The mini-nuc needs to be placed in the mating apiary, not too close to queenright hives (or you can lose some of the bees added to the box). These hives are very poor at thermoregulating – there aren’t enough bees present – and they readily overheat. Therefore, place the mini-nuc in dappled shade or somewhere it doesn’t get the full strength of the sun. 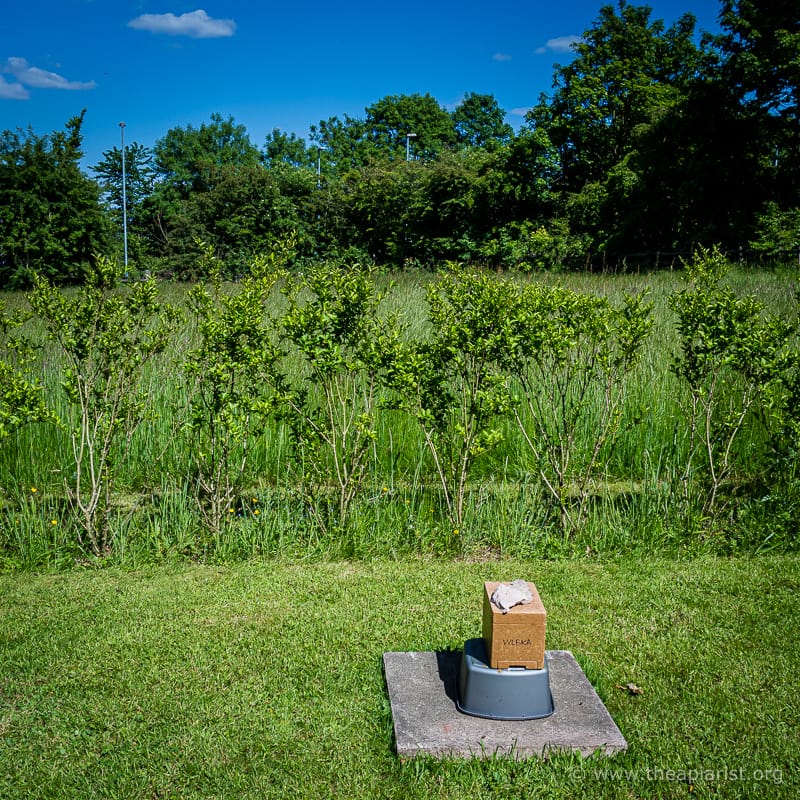 The entrance is opened and 7-10 days after the queen emerges she should be mated and laying. You remove the mated queen and add another near-to-emergence queen cell … ad infinitum, or at least until the end of the season.

After removing the last mated queen of the year you shake the bees out and store the mini-nuc in the shed for the winter months.

What could be easier?

Of course, it’s not quite that straightforward …

Ideally you stock a mini-nuc with young worker bees. Older workers are more likely to disappear back to the hive they came from (unless you move the mini-nuc a few miles away) and will be less good at drawing comb. Young bees are also likely to survive for long enough to rear the new brood once the queen is mated and laying.

Note that I also stated worker bees … you should avoid including drones, firstly because they contribute nothing to the functioning of the little colony, and secondly because you probably want the queen to mate with drones from outside the apiary 4.

There are lots of ways of achieving this, some more complicated than others. The best description I’ve read is by ModernBeekeeping in the instructions 5 they provided with Kieler hives.

In brief, this involves:

Getting them from the frames in the brood box to the mini-nuc involves the following: 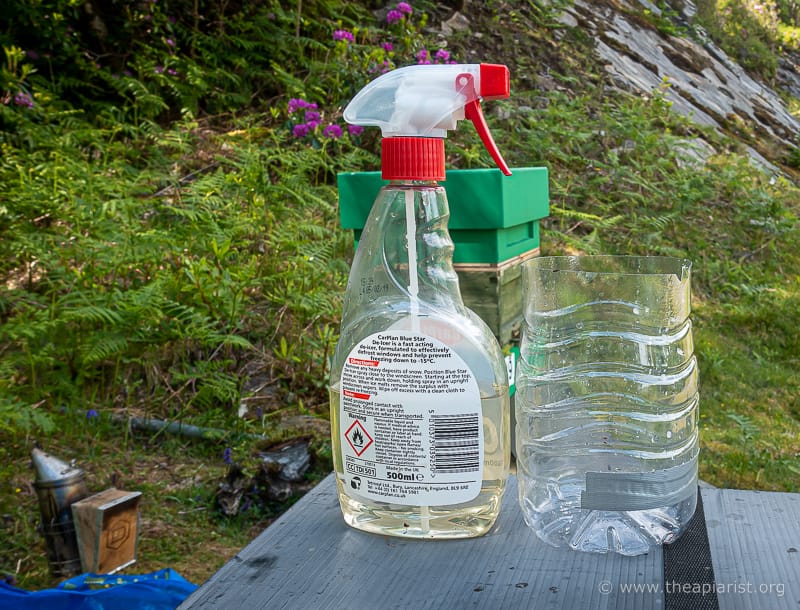 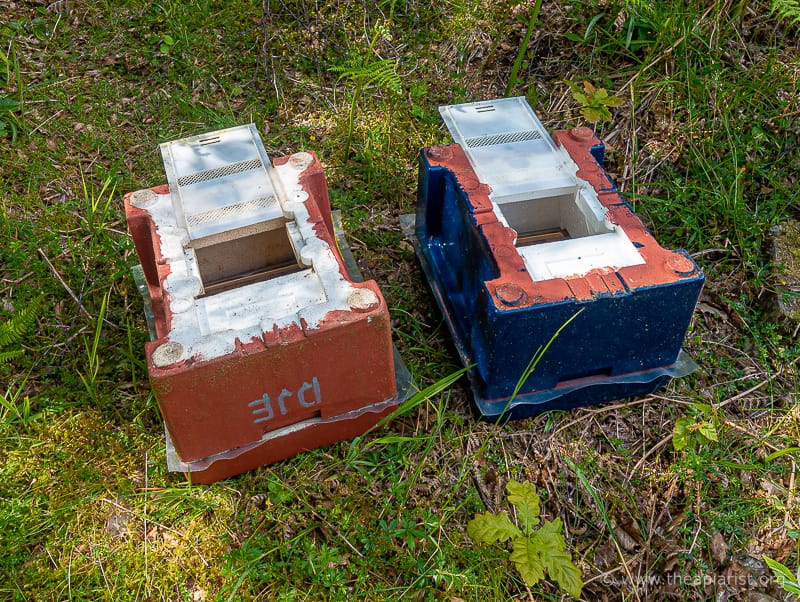 Kieler’s ready for stocking with bees

The more bees you harvest from the donor hive, the less able it will be to look after the brood it contains 7. Therefore, if you’re filling several mini-nucs you will probably need to harvest the bees from multiple hives. All can be added to the same washing up bowl/picnic cooler before distributing them to the mini-nucs.

Once you have harvested sufficient young bees and populated the mini-nucs: 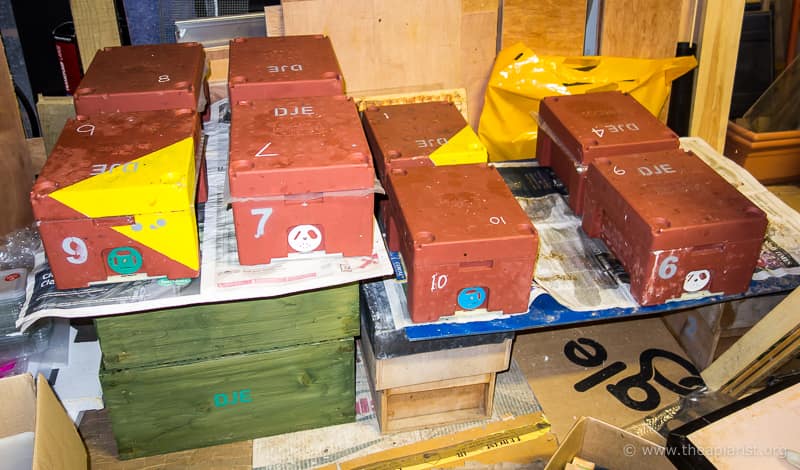 Adding the queen cell and relocating to the apiary 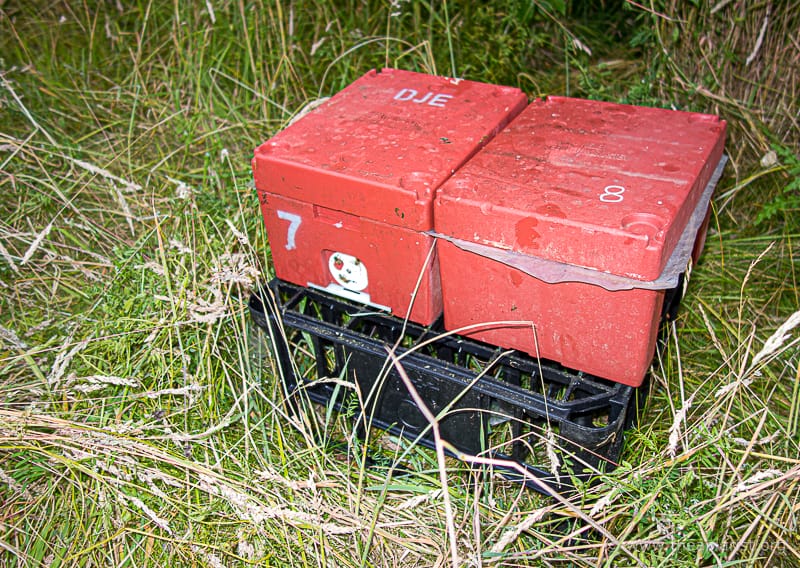 It’s as easy as that?

As with so many things to do with queen rearing, timing is very important. Typically you need to use the queen cells 10-11 days after grafting. Therefore the mini-nucs should be made up 2-3 days before that. When I lived in the Midlands, for the first round of queen rearing, this might have been in the third week of April.

Remember the proverb ‘March winds and April showers bring forth May flowers’?

In particular the ’April showers’ bit … 😉

In my experience, populating mini-nucs in the rain is probably the worst task in beekeeping.

All the bees are in the box.

They’re not happy being disturbed.

They are particularly unhappy about being unceremoniously shaken into a new box.

And, if it continues raining, they’ll be extremely resentful about being disturbed again when you return from drinking tea (and topping up your anti-histamines) to shake through the box again.

But, the queen cells will not wait. 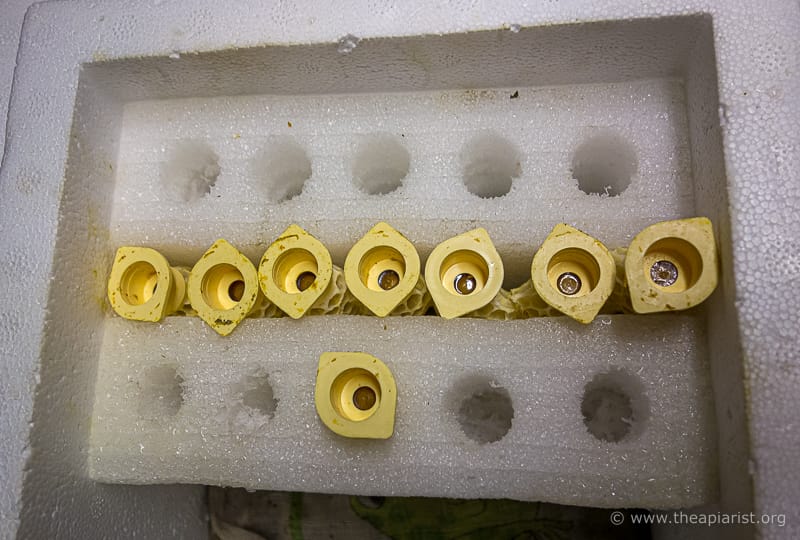 If you’re going to do this for the first time, choose a really good flying day, ideally when there’s a nice flow on. The bees still won’t like being messed about with, but it will be a whole lot easier for you.

All sorts of other things can go wrong, and sometimes do. I’ve had misters block (having previously been used for syrup), I’ve tipped the picnic cooler over, I’ve put two queens back into one hive … I could go on.

It gets easier with experience and the effort is worthwhile. You’re setting up tiny little hives from which your precious queens will fly and get mated. And once established, they can be used several times without all the palaver involved in stocking them in the first place 🙂

It is my impression that queens tend to get mated faster from mini-nucs than they do from 5-framers, or full hives. Of course, I’ve never done a side-by-side comparison of the two 10, but I have talked to a number of experienced beekeepers who have expressed the same opinion.

Why should this be?

The consensus was that the small boxes give the queen fewer opportunities to hide, meaning that the workers can more easily chivvy her out on orientation and mating flights.

However, while re-reading Gilles Fert’s Raising Honeybee Queens (Fert, 2020) I found a comment that contradicts my experience:

American breeders have noted that queens in very small mini-nucs mate later than those from larger colonies, and with a success rate of just 60% to 70%. They found that tripling the volume of these mini-nucs boosted the success rate to 92%!

I’ll try and track the original source down … and determine whether the ’no space to hide’ and ’chivvied out by the workers’ have any basis in fact or are just the sort of daft ideas beekeepers share when stuck indoors on a wet day.

I’ve certainly not noticed a lower queen mating success using mini-nucs but, statistically, I’ve not used them enough to observe the difference between 70% and 92%. 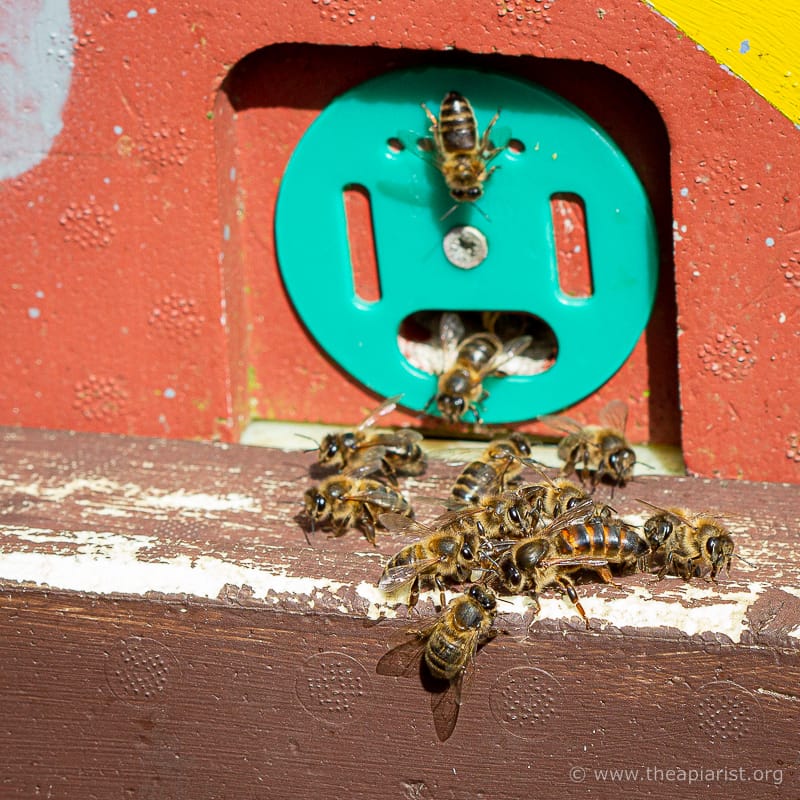 A queen about to go on an orientation flight

Once you know the queen has emerged just leave the bees to get on with things, other than checking stores and space periodically. On good flying days, or potential queen mating days (which can be worse than you might imagine – it was 14.5°C when the photo above was taken), it’s important not to disturb the colony in case you interrupt an orientation or mating flight.

And, once you have your mated queen, you can use her for whatever you want … requeening production colonies, making up nucs for overwintering, selling or donating.

When I decided to write about mini-nucs I jotted down a list of interesting things to cover. Almost none of them are in the preceding 2,700 words 🙁

That’s because I can’t cover some of the more interesting aspects of mini-nucs without covering the basics first. I’ll therefore return shortly – perhaps even next week – to this topic and waffle on about:

Mating in miniature is the title of a book by Bernard Möbus on queen mating in mini-nucs. It looks a little dated now (it was first published in 1983) but is an interesting read and, although the equipment has changed in the last 40 years, the principles remain much the same. I think it was published by BIBBA, but they no longer list it (and nor do Northern Bee Books). Try eBay?