A few weeks ago I described foundationless frames built with vertical bamboo supports. In a related post on starter strips I explained that I was going to compare homemade (dipped) wax strips with simple wooden strips or laths, the latter made from tongue depressors.

Here’s an update on the progress the bees have made with these frames so far.

This trial wasn’t properly scientific, it was poorly controlled, it was conducted over several weeks in two apiaries with bees from a variety of sources. As a scientific study it was deeply, deeply flawed. I know a bit about these things. You have been warned. Caveat emptor.

Essentially I could see no difference in the acceptance rate (effectively the rate at which bees started comb) between the three types of starter strips tested. These were homemade wax strips or wood (tongue depressors) strips glued to the top bar with adhesive and either left bare or coated with molten wax.

Some of the frames I’ve been using even had one of each of these types of starter strips in each of the three ‘panels’ (see below) on the frames.

Frames like these were used in hives with packages or shook swarms and were readily accepted by the bees and rapidly drawn out (either with a good flow of nectar from the OSR, or 1:1 syrup made up from leftover fondant). By the time I went to check all three ‘segments’ were started in the hives. I didn’t monitor which was the first to be used … I’d have needed to be inspecting hourly and I have a life (and job and family).

As far as I could tell there appeared to be no preference to the type of starter strip used. 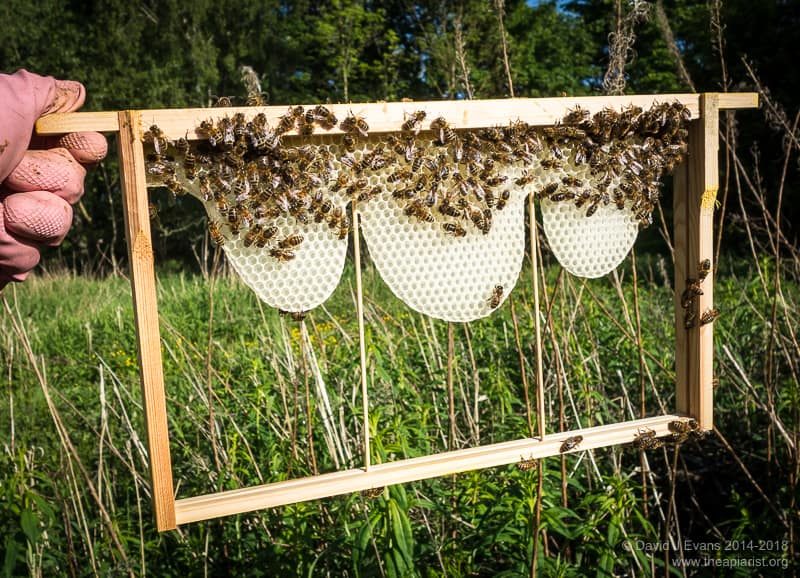 Of the 20-30 frames like this used so far this season, all have remained attached during inspections, whether started on wood or wax. I’m reasonably careful handling frames, but I reckon these could cope with all but the most cack-handed beekeeper. Colonies in the bee shed have been exposed to temperatures in the mid-high 30’s (°C for overseas readers) with no adverse effects, other than the expected softening of comb at high temperatures.

Conclusion – since the outcome was indistinguishable there seems no reason not to use simple unwaxed wooden strips as starter strips in foundationless frames. The KISS principle† applies here.

There are two or three additional benefits from the observation that simple wooden laths are perfectly acceptable as starter strips; 1) there’s no need to go through the interminable and messy process of making your own wax starter strips, 2) there are no foundation costs involved‡, 3) the frames can be recycled through a steam wax extractor without damaging them.

Foundationless frames built with vertical 4mm bamboo skewers are easy and inexpensive to construct. I’ve used about 50 of these already this season with almost no problems. The bees usually avoid the vertical skewers until the comb is nearly completely built. Often this is well after the queen has started laying in the upper section of the frame or the bees start to store honey in the upper cells. 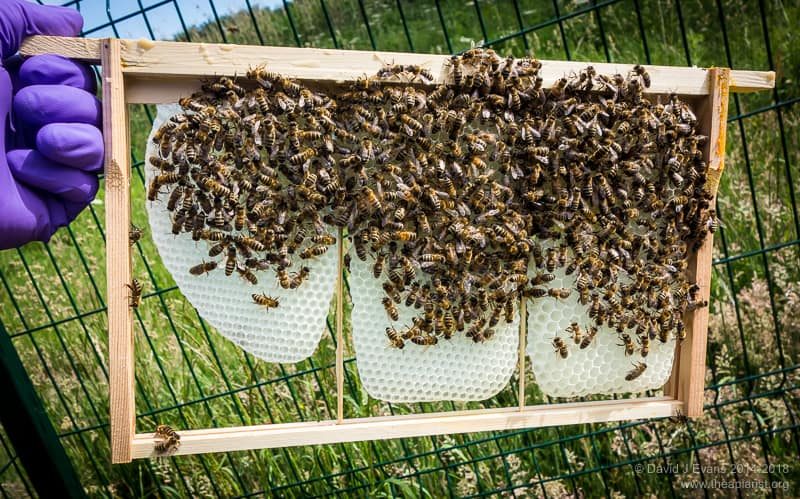 It’s not until the frames are well occupied with brood or nectar that the vertical gaps on either side of the bamboo skewers are usually filled in§. Until then the comb is only attached at the underside of the top bar. This is a potential weakness … until the comb is completed there is little lateral support or stability.

Handling the frames, particularly in hot weather, requires some care. I found myself going through the same frame handling methods I was taught several years ago – turn through 90°, rotate around the top bar, turn back through 90° etc. to inspect the other side of the (now inverted) frame.

Re-reading that it still doesn’t sound quite correct, but anyone who has attended a winter training course for new beekeepers will be familiar with what I’m talking about. 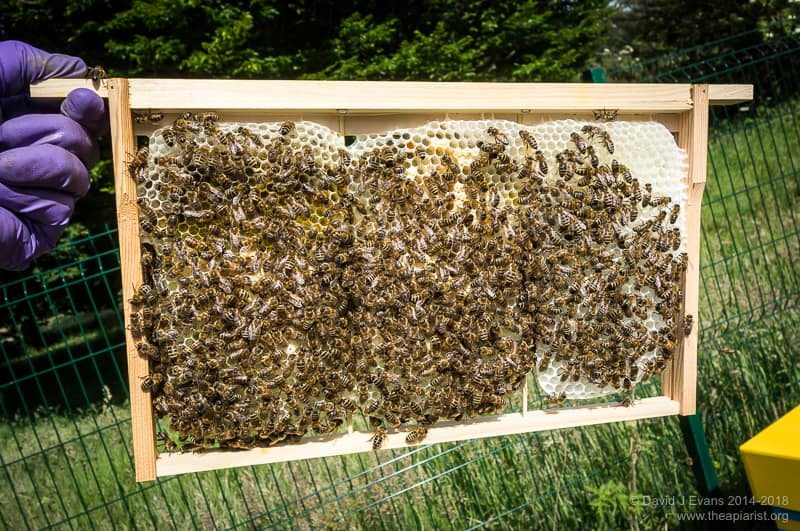 Once the gaps are filled the comb is pretty robust and can be (mis)handled with the usual amount of care used for comb built on wired foundation. In addition, you can smile smugly to yourself as the woodwork was probably built from second quality frame partsΔ, there were no foundation costs involved and the wax is clean and untainted by residues.

If you use horizontally wired foundationless frames there will be large swathes of the comb dedicated to rearing drones. This may be intermixed with worker comb.

In contrast, frames built with vertical bamboo skewers tend to be drawn in thirds … with each third being ‘dedicated’ to either (or largely) worker or drone brood.

In the ‘Foundationless triptych …’ image above the left and central panel are largely worker comb, with the right being drone. In the image below the left and right panels start as worker but soon transition to all drone comb, the central panel is worker. 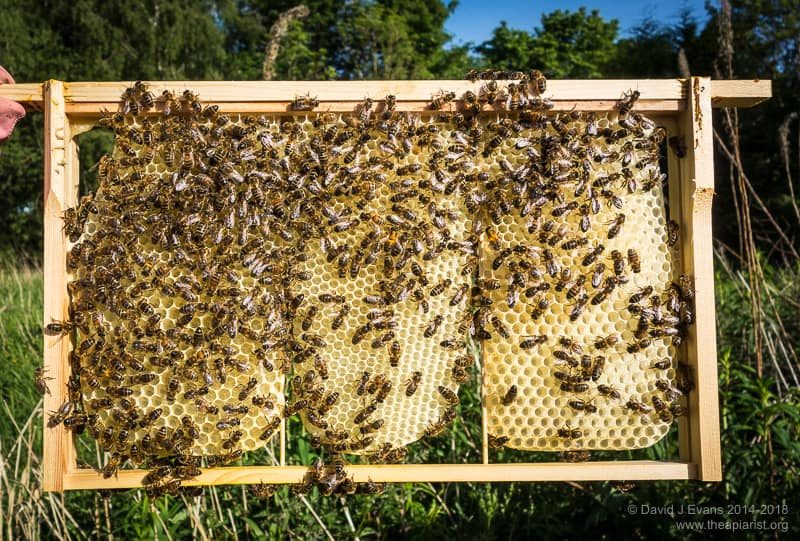 I see this as a very significant advantage of this type of foundationless frame. Since the demarcation between drone and worker brood is pretty clear and since there are no wires to be cut, it will be a simple task to excise the unwanted segment (whether drone or worker) as required. We do this type of manipulation all the time when harvesting brood from our research colonies and the bees rapidly rebuild the damage if there is a nectar flow. It does not seem to result in weirdly shaped brace comb appearing throughout the hive.

Conclusion – bamboo skewers make good supports for foundationless brood frames. Before being completely drawn the frames need to be treated a little more gently than those with horizontal (wire or monofilament) supports which are more rapidly incorporated into comb. In my view the robustness and ease of construction using bamboo skewers outweighs this transitory lack of support.

I’ve said it before, but it bears repeating. Freshly drawn foundationless comb is really lovely stuff …

† The KISS principle (keep it simple, stupid) dates back to the early 1960’s. It was originally a naval design term and was an expression meaning that most systems work better if they are kept simple rather than being made more complicated. Simplicity was therefore the design goal and unnecessary complexity was to be avoided.

‡ As a comparison, 1000 tongue depressors cost about £17 delivered. This is sufficient for well over 300 frames that are usable in perpetuity, or at least as long as the joints remain intact. In parallel to frames made with homemade foundation I have also used another 20-30 with commercial foundation. These worked as well, or badly, as any of the other starter strips used. 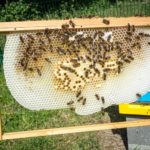 § It’s interesting (to me at least) that vertical 4mm supports are avoided whereas horizontal 1mm monofilament is readily incorporated – for example, compare the image on the right with those above. Is it the thickness or the orientation that makes them acceptable? How would the bees cope with very thin vertical supports? Alternatively, would they readily build comb ‘down’ through 4mm horizontal bamboo skewers? The latter is tricky to test as the longest skewers I’ve been able to find (35cm) are too short for a National frame. However, the ability to more willingly incorporate a thinner vertical supports can easily be tested and will be something I may well investigate next season. I suspect it’s the thickness of the ‘barrier’ rather than the orientation that’s important. Very thin wooden skewers would be flimsy (even if they were available), but there are a variety of other materials that could be tested.