There have been a couple of stories in the press recently that have made me think about the idealised version of beekeeping that is often promoted … with the reality of a lot of amateur beekeeping 1.

Most recently was the announcement of the new CBBC show titled Show Me the Honey! which will be available at the end of this month on iPlayer.

Information is a bit limited at the moment. It’s clearly a programme featuring and for children. According the The Guardian it “features five children and their families taking part in a series of weekly challenges to create the best hive and tastiest honey, with the winner taking home the beekeeper of the year trophy”.

Undoubtedly this will increase interest in beekeeping. This isn’t in itself a bad thing, though the timing is a bit off. The seven week series will end with much of the winter left to run. 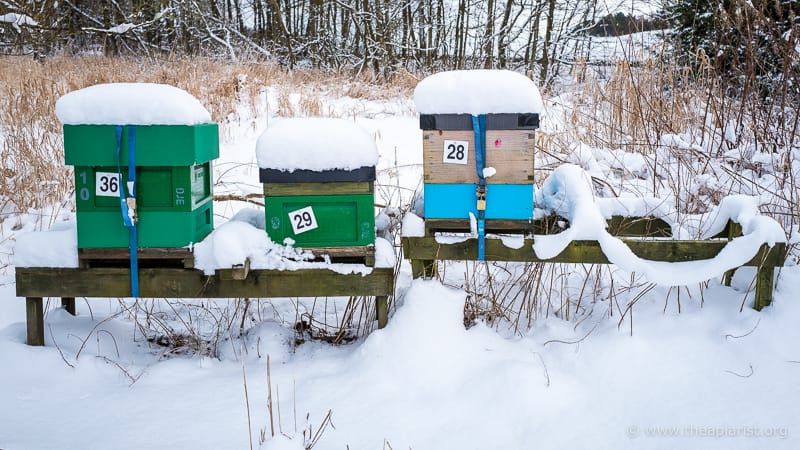 Not the best time to start beekeeping

Will those watching who are captivated by the thought of keeping bees go for the ‘quick fix’ of an expensive mid-March nuc thinking “What can be so difficult? One of those kids became the ‘Beekeeper of the Year’ in just seven weeks”.

Or, will they do their homework, attend a Start beekeeping course with a local association, go to a couple of ‘bee handling’ sessions in the association apiary, find a mentor … and only then order a locally sourced nuc?

Just like Show Me the Honey!, my beekeeping often involves a set of ‘weekly challenges’.

The concept of competitive beekeeping grated a bit when I first read about it, but the reality is that beekeeping can be competitive.

Think about the annual honey shows.

A bit of lighthearted entertainment for the end of the season?

Or a cutthroat affair, with lashings of deviousness and skulduggery to produce the best 1 oz wax blocks?

That sort of competition I can cope with, although I no longer partake as I’m a very bad loser.

But think about what’s happened to climbing, and the huge success it was at the Olympics. The speed climbing event is probably now the fastest non-gravity-assisted 2 Olympic sport.

Perhaps the inevitable adult or celebrity spin-offs of Show Me the Honey! will involve speed inspections?

With Martha Kearney doing the commentary … 3

So let’s return to that quote from The Guardian … ‘the best hive’.

Are they going to start with a Thorne’s Bees on a Budget flatpack cedar hive, a mismatched pile of nails, a hammer and a set of IKEA-ish hieroglyphic 4 instructions?

Is the winner the one who gets everything square and true? Does beespace matter? What about injuries? 5

Or perhaps it will be to dream up ‘the best’ new hive design … and there’s lots of competition for that.

How about the urban-friendly 6 B-Box the ‘first ever beehive designed for home beekeeping’. 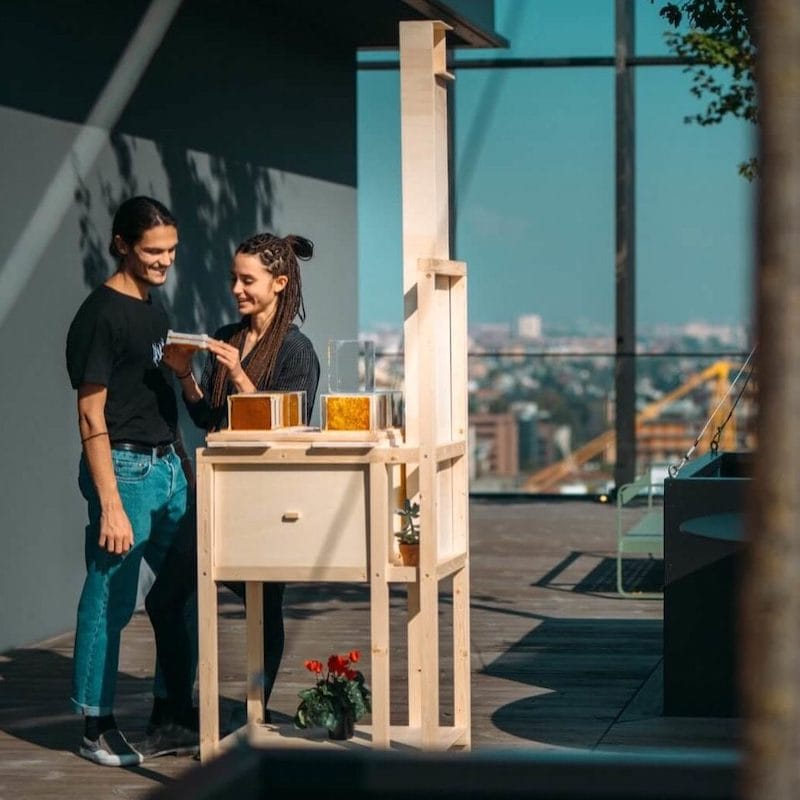 Hang on a sec … I’m currently at home.

Let me just check what’s in that blue and yellow box by the shed. 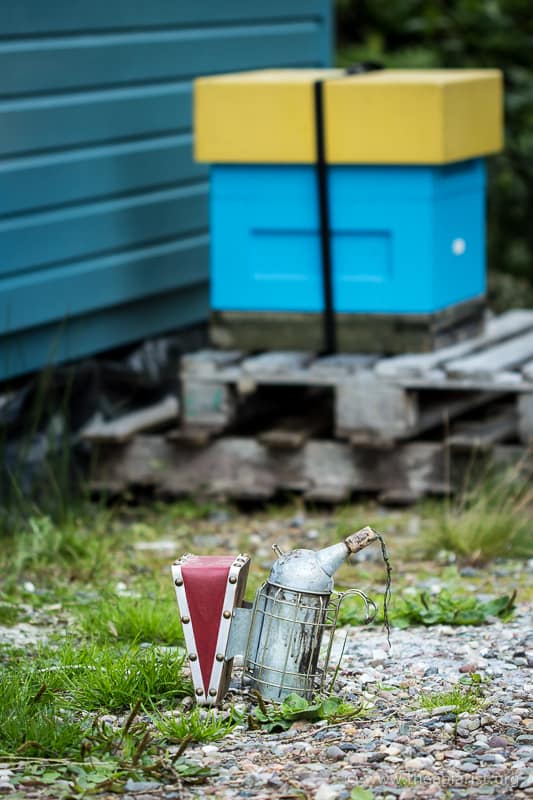 Am I doing something wrong? Have I got a hive designed for beekeeping somewhere other than home?

There are some grand claims made for the B-BOX and the website is awash with buzzwords 7. I’m not sure the 16 small honey ‘supers’ would be sufficient during a strong nectar flow from the lime trees found in many cities.

These hives are about €480 (plus an extra €580 or so if you want a ‘swarm’ of bees with it … and I think they probably do mean swarm from the description. Yikes!).

Or what about this Philips design – another Urban beehive – that “consists of two parts, a tinted glass shell that houses the honeycomb frames and a flower pot with an entry passage to the glass vessel. You can then harvest the honey produced, simply pull on the smoke actuator chain to calm the bees before it is opened”. 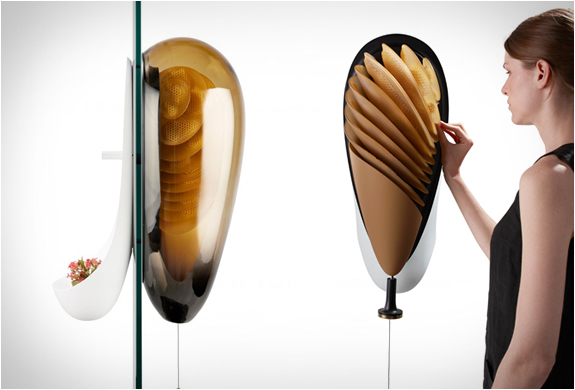 I was sure that bees draw comb in a vertical plane?

This one is a ‘concept’ hive, so is effectively priceless.

I’m not sure that last hive is entirely practical.

Instead, how about this ‘robotic’ hive – or Beehome as they call it – from Israeli startup Beewise? This is a container 8 housing 24 colonies which are constantly monitored. 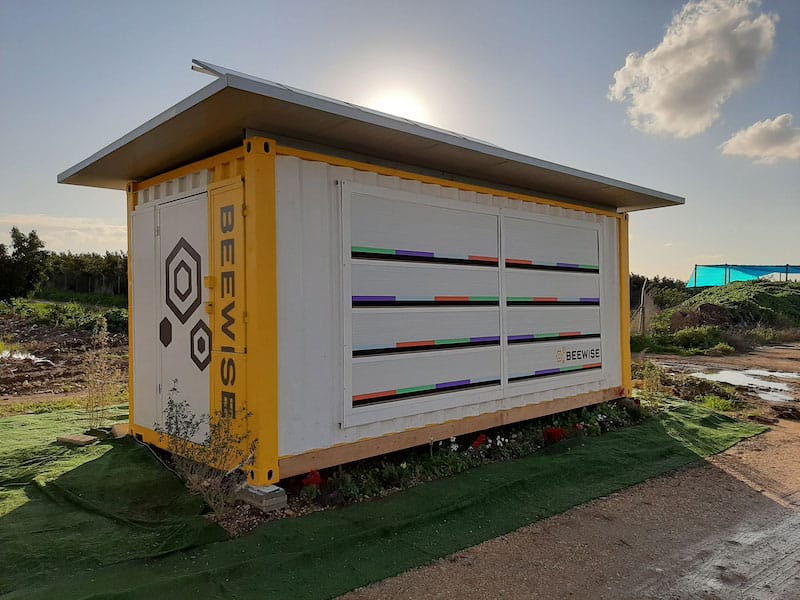 The technology is clearly pretty clever as they appear to be able (or claim) to:

When you think of some of the manipulations needed for successful swarm control you wonder – well, I wonder – how on earth a robot could do it by simply ‘changing the conditions in the hive’.

Their website shows a screenshot of an app displaying digital images of frames, together with schematics of the distribution of the various types of brood (capped/uncapped) and stores within the hive.

Very clever … though I do wonder whether the robot takes quite as much care as I do returning frames to the hive without crushing or rolling bees in the process.

At least, that’s the price quoted on the website. I’ve no idea if that’s ‘all in’, or if there are hidden costs involved, like custom frames, software licenses. If it is ‘all in’ and every hive generates a good crop of honey each season it seems very reasonable.

But, and this is a biggy as far as I’m concerned, it seems to to rip the soul out of all that is special about keeping bees.

So those are the fantasy hives that the public read about in the newspapers and that adorn press releases.

Super-clean and shiny and described in glowing terms as bee friendly, bee-centric, sustainable, healthier or a nature-based solution.

In many ways these are what shape their expectation and understanding of beekeeping.

The reality is that bees do just fine in almost any relatively secure container.

Or a variety of beehive types …

… including some that appear to consist mainly of gaffer tape.

I’ve discussed the concept of the ‘the best’ hive previously 10.

The 12-13 pages of different hive types in the Thorne’s catalogue describe a plethora of different sizes and designs. As long as they have the correct bee space and the boxes are broadly compatible – which really means flat interfaces – I’d be happy to keep bees in any of them.

Sure, some might suit my beekeeping a little better than others, but I reckon I’d do OK with them all.

But, of course, I’d want more than one … which is where the compatibility becomes critical. I’d inevitably end up mixing ‘n’ matching different boxes during swarm control, autumn uniting or simply when running out of equipment. 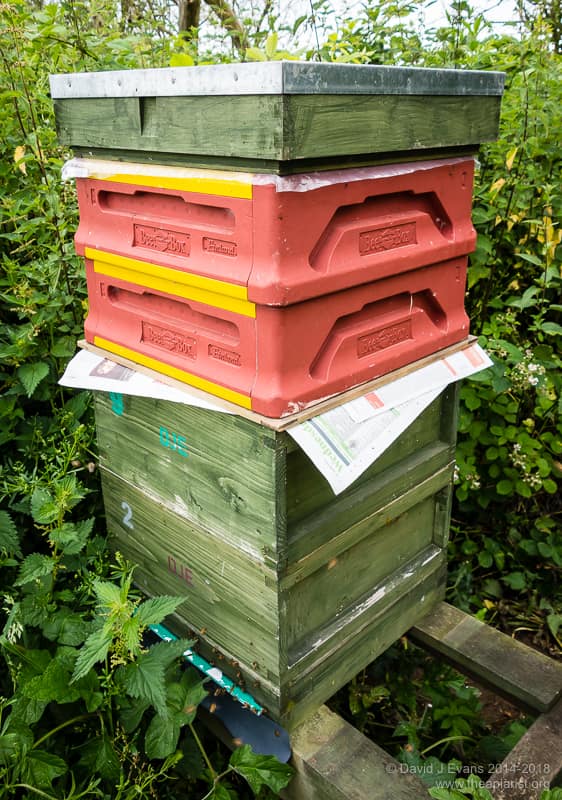 And it’s this reality that never appears in that glossy advertising on promotional websites. The ‘cobbling stuff together’ to make something that’ll do. In the picture above I’m uniting a queenless double hive with a queenright poly hive.

The poly hive is actually a bait hive built from two stacked supers. They are the Paradise/ModernBeekeeping design with an overhanging lip on the lower face, hence the thin, wide, wooden shim between the boxes.

And the crownboard is a piece of thick polythene.

All perfectly functional, but not quite as glossy, organised and coordinated as is often displayed in print or online 11.

But this neat, clean and pristine presentation doesn’t stop with the hives …

What about the protective clothing?

If you look at the photos above you’d think you could harvest honey (from the B-BOX) wearing a T-shirt and jeans, or inspect your Philips urban hive in a slinky Christian Dior LBD.

The reality is a little less flattering.

Bees can sting, and agitated bees – with dodgy parentage or through sloppy handling 12 – can sting quite a lot.

As a quick aside, I note that one of the presenters of Show Me the Honey! has apparently been ‘keeping bees for 15 years and has never been stung’.

And now back to reality 😉

Does my bum look big in this? … doesn’t even come close.

Everything … looks big in a beesuit.

And usually the beesuits are completely pristine, not stained with propolis, held together with gaffer tape or with pockets hanging off from hive tool damage 13. 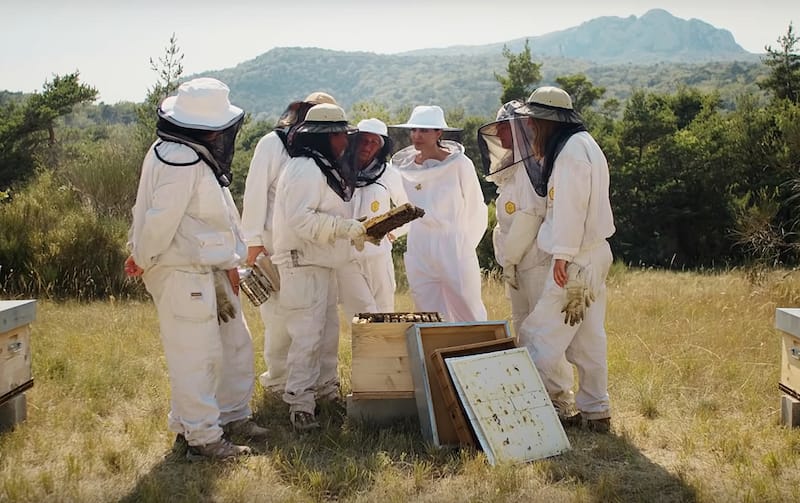 The beesuit Angelina Jolie is wearing is what they typically look like in ‘fantasy beekeeping world’. No broken zips, no propolis staining, no pockets bulging with emptied queen cages and old gloves.

Those worn by the beekeepers around her are probably a bit more normal, though I also have a sneaking suspicion they’ve worn their ‘Sunday best’ beesuits for the photo op.

As another aside, Angelia Jolie is promoting the UNESCO programme ‘Women for Bees’. This teaches beekeeping and entrepreneurship to women in UNESCO designated biosphere reserves around the world. Further details also in National Geographic.

And it doesn’t stop there

I’ve had a great beekeeping year.

There have been some notable successes – in queen rearing and mating, in preparing nucs and in a really excellent honey crop. 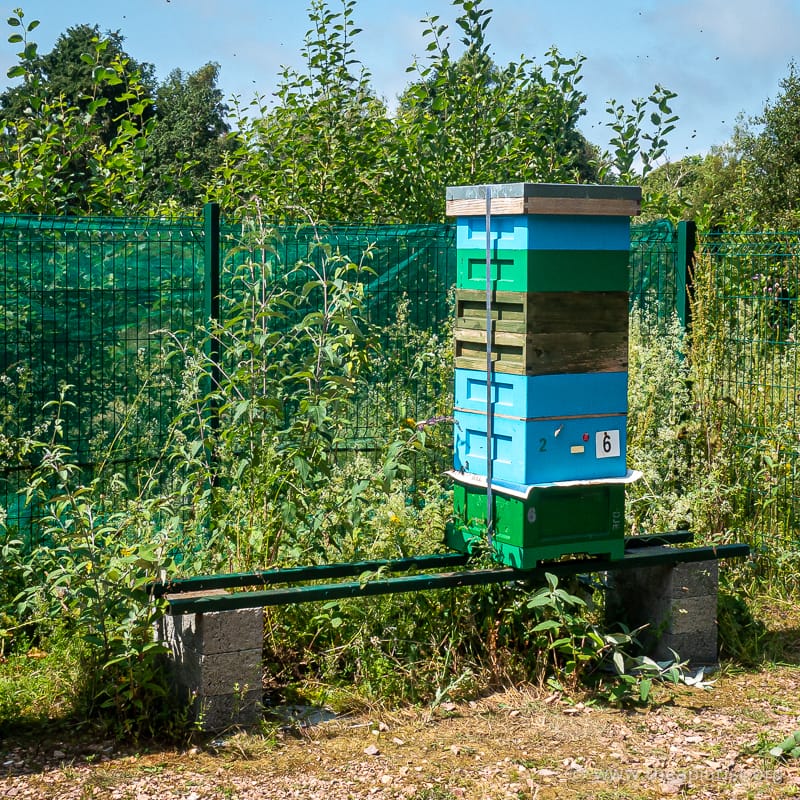 Show me the Honey!

However, it wasn’t all the clean, neat and tidy affair depicted in the press.

And, to be honest, parts of it could best be described as an omnishambles.

I’m being polite there.

Here are just a few examples where my beekeeping reality didn’t quite match the glossy, propolis-free, beautifully ordered and presented world of beekeeping fantasy. 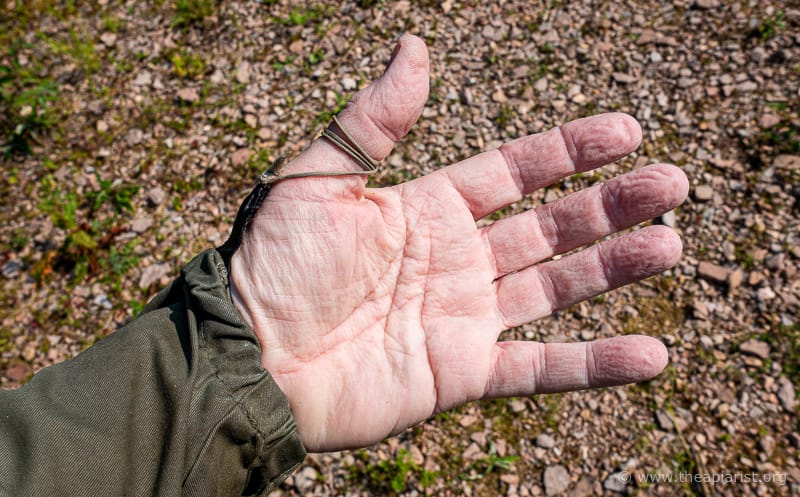 That’s the reality of a beekeeping season.

I wouldn’t have it any other way 🙂