Synopsis: In the winter bees are low maintenance, but they’re not no maintenance. You need to carry out a few regular winter checks to help them overwinter successfully. Here are the first two things to check … I’ll deal with the third and final check next week.

The ‘beekeeping season’ runs from spring until autumn. Quite when it starts and stops depends upon your latitude and enthusiasm 1.

More of each have opposing effects in the spring.

More latitude and the season starts later, more enthusiasm and you might be tempted to start colony inspections (the first ‘proper’ beekeeping of the year) in early spring.

I’m certainly enthusiastic but I live in Scotland. I therefore rarely open a hive before mid/late April. In some seasons it might even be mid-May.

But that doesn’t mean that there’s nothing to do between the end of the preceding season and the start of the next.

The winter wait (for the start of the season) doesn’t meant that there’s nothing to do.

During the winter months of the year bees are really low maintenance, but they’re not no maintenance.

You need to check the hives at about monthly intervals. More frequent checks will do no harm – these are ”The bees don’t even know they’re being checked” checks – but probably aren’t necessary. These checks are important to ensure the bees overwinter successfully.

Spring is on the way … Fife snowdrops, mid-February 2022

Of course, you should also check after high winds or heavy rain (very timely as I’m writing this as Storm Eunice bears down on the south west) as an overturned hive or a badly flooded apiary aren’t conducive to colony survival.

So, what do these checks entail?

What are you actually looking for?

How can you tell much of anything from an inanimate cedar or poly box on a miserable, cold, wet February afternoon?

Essentially it comes down to three things … the state of the colony, access to the hive and weight.

What’s happening in the box?

Mid-February, it’s 5°C, there’s a squally northerly blowing intermittent sharp hail showers down from the hills. No self-respecting bee would venture out in conditions like these.

Most self-preserving beekeepers would probably prefer to be sat in front of the fire reading Gilles Fert’s Raising honeybee queens 2.

However, there’s work to be done.

What on earth can you judge about what’s happening inside the box on a day like this?

If you’re a relatively new beekeeper (and this applies to some of us who have been keeping bees for many years) you would probably like to know if there are any live bees in the box.

After all, you’ve not see a flying bee for months.

Perhaps they all froze to death in those heavy frosts over the previous week?

Don’t rap sharply on the outside of the box and listen for an answering angry buzz. Yes, it’s a way of detecting whether there’s ‘life in the old box yet’, but it’s an unnecessary disturbance for the bees.

There are two relatively simply methods, one much more useful than the other.

The first is to use a clear perspex crownboard on the hive 3. It’s then a simple matter to lift the roof and observe the state of the colony. 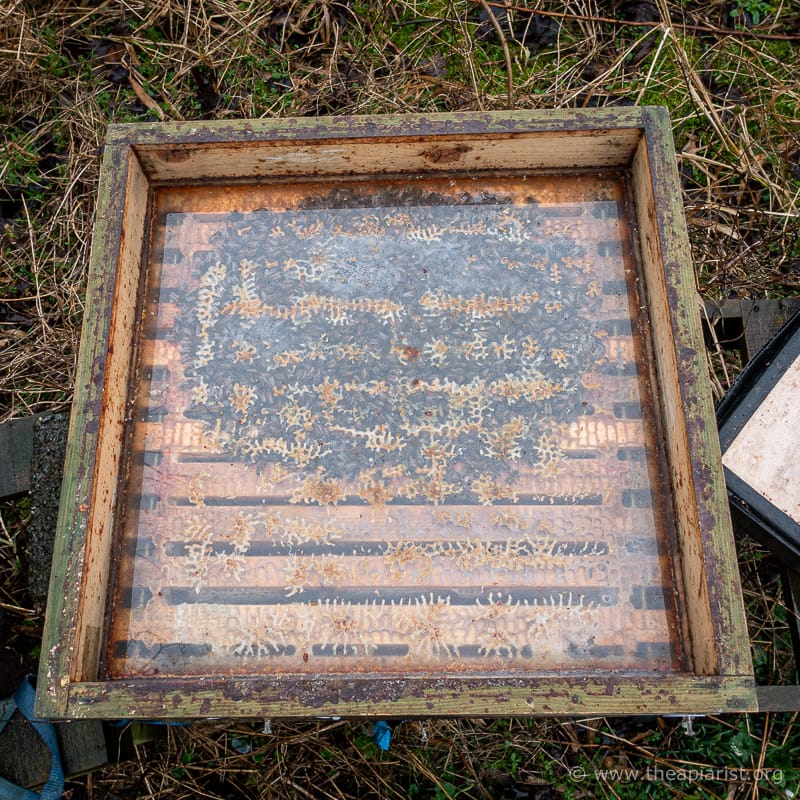 Here’s one of my colonies from last weekend. I can tell from the size of the cluster that the colony is reasonably strong.

The bees are moving on the periphery of the cluster, so they’re alive 4.

In addition, though it’s not entirely clear from this photograph, there are at least 2-3 frames of capped stores at the opposite side of the hive to the cluster.

One of the things missing from the picture above is any significant amount of condensation on the underside of the perspex crownboard. This is because the deep inner rim of the crownboard is usually filled with a 50 mm thick block of insulation. 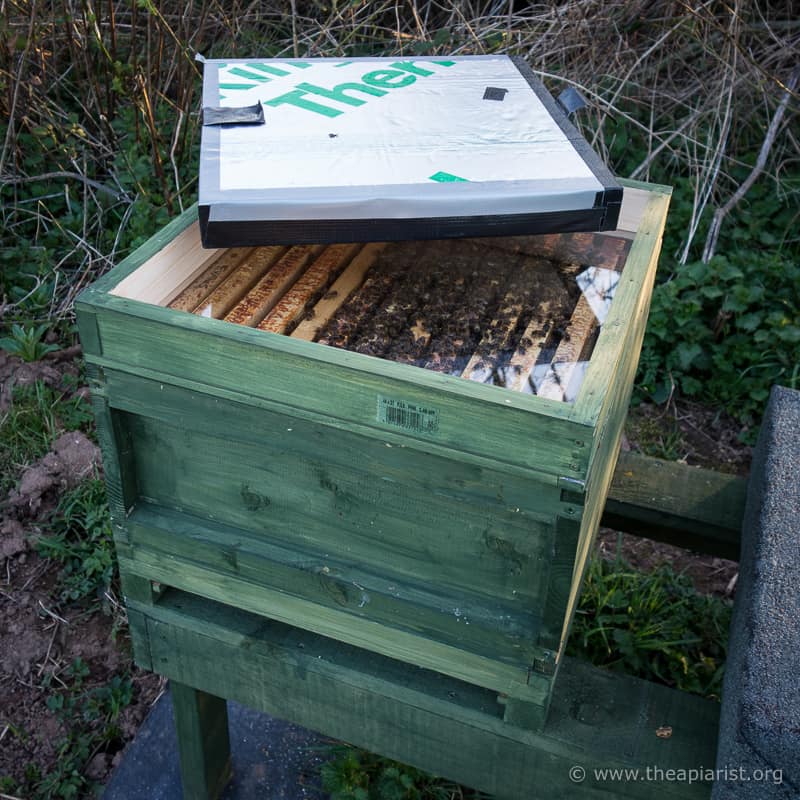 This is essential unless the roof is very well insulated. Without insulation immediately above the perspex the high level of humidity within the hive will lead to large amounts of condensation on the underside of the perspex.

This condensation – or at least some of it – will then drip down onto the cluster, making it a pretty unpleasant environment for the bees.

So, by simply building a ‘window’ into the top of the hive you can determine the size of the colony, whether it’s alive and possibly judge something about the level of stores in the hive.

All of which, and more, you can achieve another (better) way … read on 😉

I quite like the perspex crownboards I use on some of my colonies. However, I consider them far from essential and can judge the state of the colony much better by ‘observing’ them from below rather than from above.

If you use open mesh floors (hereafter OMFs) you can collect and inspect what falls through the floor and get a very good idea of the size, state, health and activity of the colony.

An OMF should have a white (or pale yellow) coloured plastic tray or sheet that can be slid underneath the floor to catch the debris that falls through.

Not black and definitely not Varroa-coloured 😉

White polystyrene Varroa trays really need painting as they discolour badly after a couple of seasons. 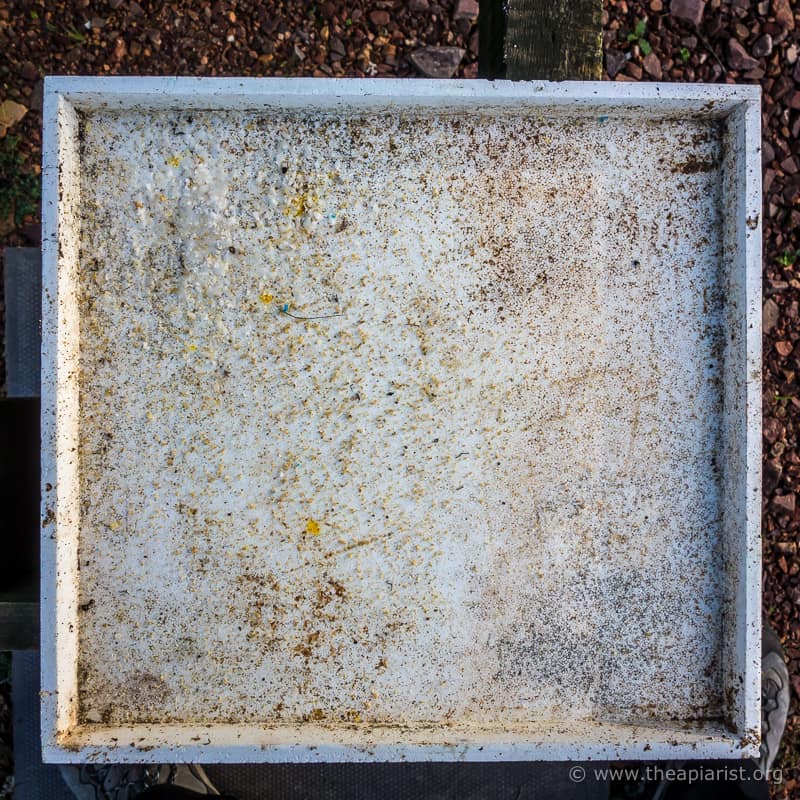 A well designed OMF – and there are many that are not 6 – should have a close-fitting tray so that those gusty February squalls don’t disturb the debris that falls through. The position and type of debris is important and if it has been blown about all over the place – or half-eaten by slugs or ants – then your task will be that much harder. 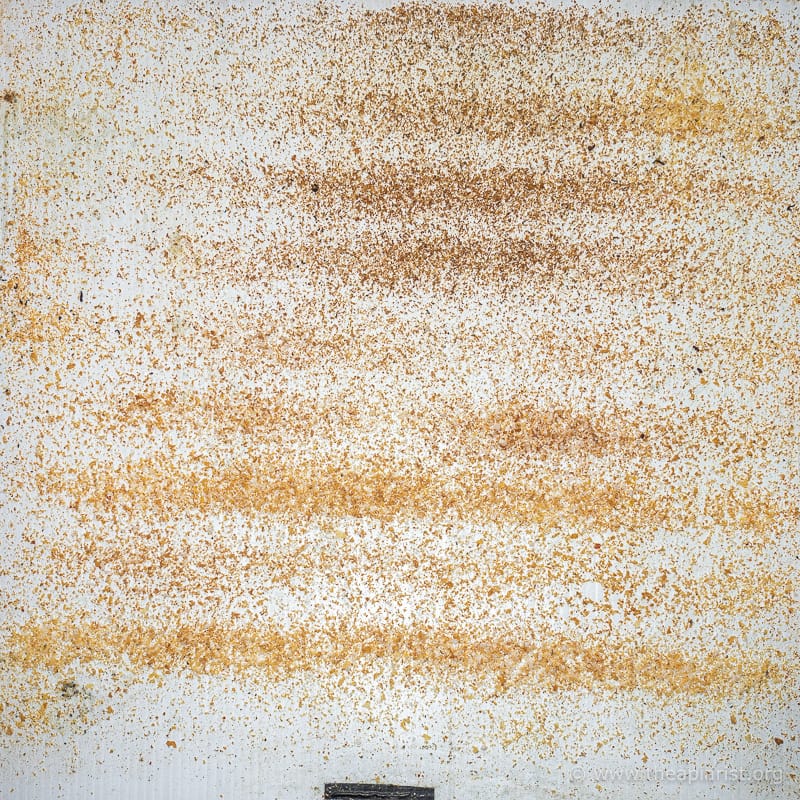 This is a tray from a reasonably strong colony in a single brood box. You can just about make out 10 fuzzy horizontal lines of debris. These lines are made up of stuff that’s fallen through the OMF.

You realise that ‘stuff’ is a highly technical beekeeping term that covers everything from antennae, legs, wax cappings, pollen and Varroa to a range of other unidentifiable crap 7.

Tasseography (or tasseomancy) appears to be an entirely made up word 8 for reading tea leaves.

Deciphering the debris on a Varroa tray is a more exact science than tasseography which – and at the risk of offending any fortune-teller-beekeeping readers – isn’t.

It’s not science and it’s not exact 9. The existence of well-reviewed books on the subject proves nothing other than the gullibility of purchasers I’m afraid 10.

So, let’s look again at the debris in the picture above.

The four rows in the centre/top are darker. These are directly below the cluster and are cappings produced (and dropped) as brood emerges. Brood capping are biscuit-coloured (think a sort of dark digestive, not a pale custard cream), presumably because of the incorporated pollen and associated pupal casings.

In addition, mixed in with these rows is some paler granular debris, and there is a lot more of this in the very obvious rows towards the bottom of the picture.

These are the wax cappings that are produced when the bees uncap stores. If you have a close look at these rows you can also see some white or off-white sugar crystals.

So, we can tell the approximate size of the brood nest, we know they’re rearing brood and that they are busy uncapping stores.

The one thing you won’t see on that tray are any Varroa 11. That particular tray was left in situ from 17/1/22 to 13/2/22. I can therefore be reasonably confident that the colony is healthy, with low Varroa levels. 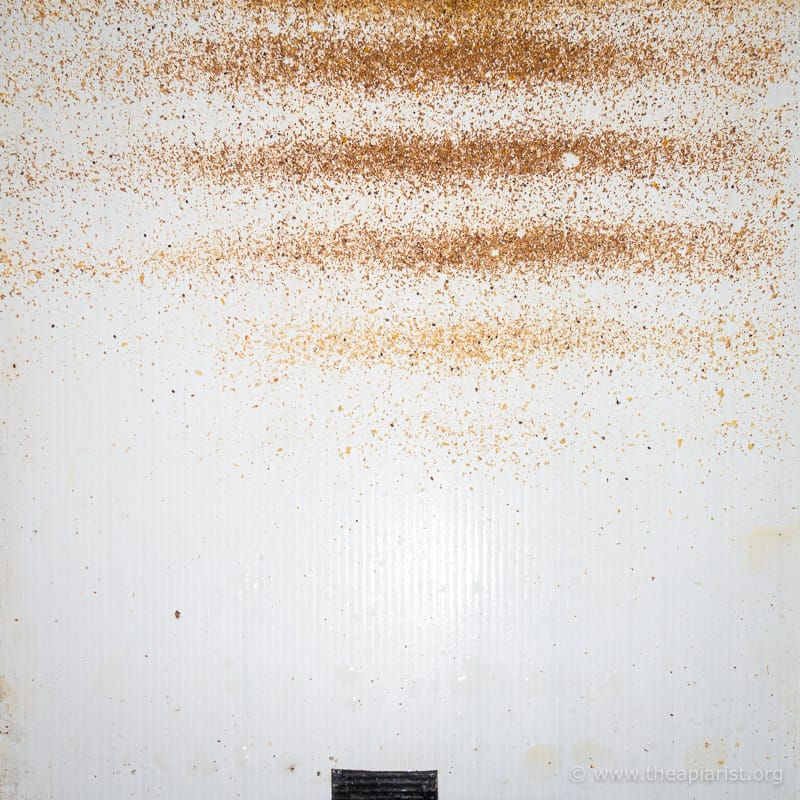 I can see a tall, handsome stranger in your future … and a lot of Varroa

This second tray is from another colony in a single brood box. They are also rearing brood but have yet to venture much beyond the cluster when uncapping stores.

However, looking closely at this tray I can see a disappointingly high Varroa drop … somewhere in the region of 30-50. Again, this tray has been under the colony for a month, so I’ll need to monitor Varroa levels carefully as they build up during the spring.

As an aside, both these colonies have an identical record of miticide treatments 12 and both are in the same apiary. My records show that the colony with the higher Varroa natural drop (i.e. not due to recent treatment, the tray was cleaned in mid-January and they were last treated in November) in winter have consistently had higher mite levels.

All other things being equal – e.g. temper, behaviour, frugality 13 – I would choose to rear queens from a colony with the low mite levels.

The colony that first Varroa tray was from are not ‘mite resistant’.

They will have Varroa.

My post-treatment mite counts showed a modest mite drop and I’m confident that the treatment will have been no more than 95% effective. However, low mites are better than loadsa mites 14 and it will be interesting to see if colonies headed by daughter queens behave similarly.

The late summer/early autumn colony reduces in size as the year progresses and as bees die off. At some point in early spring that daily births outnumber daily deaths (Murray McGregor calls this ‘crossover day’) and the colony starts to expand again.

So what happens to all those corpses?

The bees fall down through the cluster to the hive floor. On good flying days the undertaker bees will carry these away and discard them outside the hive.

However, during protracted cold or wet periods when the bees cannot fly the corpses can end up covering the floor and eventually blocking the hive entrance.

So the second check you need to perform is to ensure that the hive entrance is clear. This might mean removing the mouseguard and gently raking out the accumulated corpses.

In the kewl floors I favour the L-shaped entrance requires a correspondingly L-shaped piece of wire (a repurposed stainless steel spoke from a bicycle wheel) to check it’s clear. The same tool works perfectly well on almost all other hive entrances as well.

Be aware that you might inadvertently disturb workers near the hive entrance … these can fly out and aggressively ‘ask’ you to move away 15.

The only entrances this multipurpose-and-soon-to-be-patented tool 16 is unsuitable for are those on the hives in my bee shed. 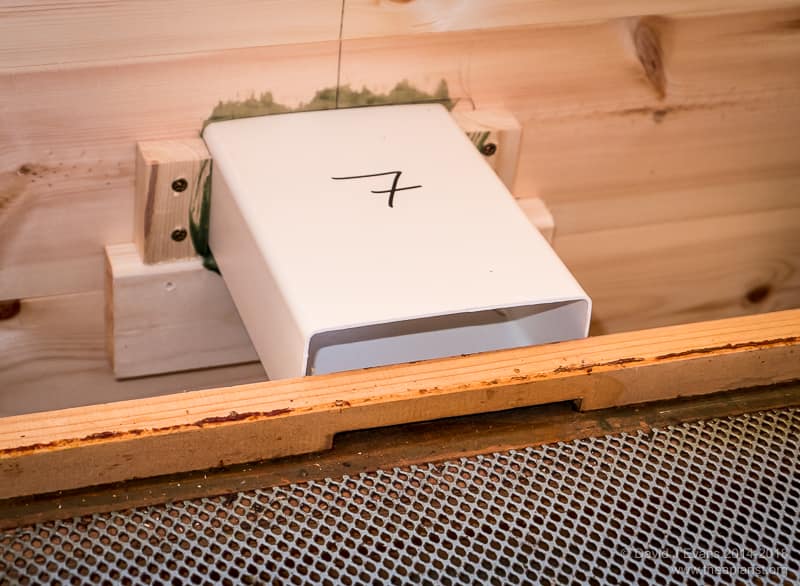 These have a 6” tunnel entrance. Even with a torch it’s difficult to see whether the inner hive entrance is blocked or not.

However, since you’ve already removed the Varroa tray it’s easy to look up through the OMF and check it’s clear.

There are two ways to do this: 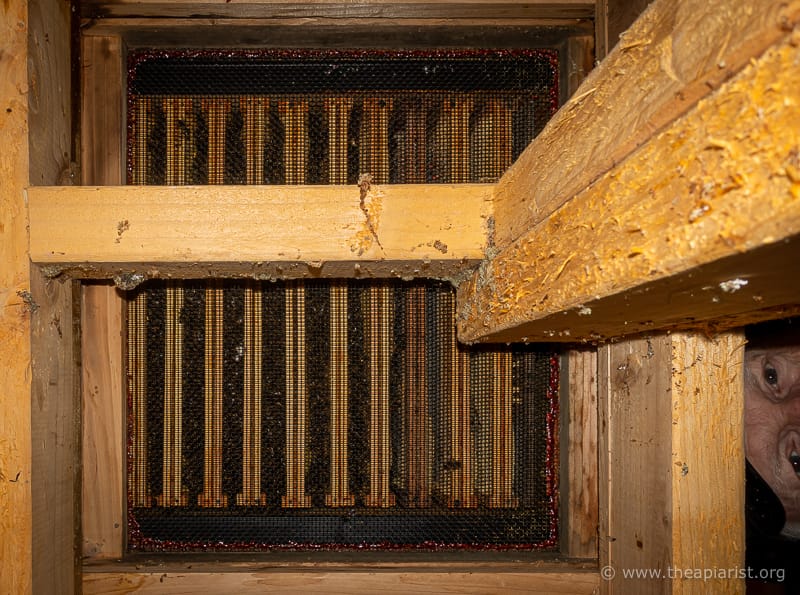 If you do find the floor covered in corpses and the entrances blocked – whether the hives are in a shed or outside) it’s very important to clear them before leaving the apiary.

Simply separate the brood box from the floor, no need to remove the crownboard, set it gently aside. Clear the floor and the entrance and replace the brood box.

Fortunately, the floors of my hives were all reassuringly clear of corpses.

In the photo from underneath the floor you can see the bottom bars of the frames and, between them 17 the serried rows of bees on the underside of the cluster. There are a lot of bees in the box.

So, without disturbing the colony you now know:

Not a bad result for 5 minutes work.

But there’s one more thing to check.

Do they have sufficient stores to survive until your next visit to the apiary?

Actually, not just survive, but do they have sufficient stores to continue to rear brood so that the colony expands to be strong enough to exploit the early season forage when it’s available.

And I’ll deal with that question next week as I’m already fast approaching 2500 words 18 and there’s quite a bit more to cover on hive weights and winter feeding.