Queen mating has been a bit hit and miss for me this year so I was pleased to find a number of mated, laying queens in 5 frame nucs when I checked yesterday evening. The nucs were arranged using a circle split and a couple of queens had clearly failed to return from mating flights (that’s a guess … she had definitely emerged from the cell). These boxes were depleted of bees and the remaining stores were being robbed out. I moved these nucs aside and shook the remaining bees out. 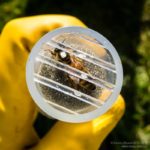 I’d forgotten my scissors but did find a marking cage and pen in my beesuit, so carefully started queen marking each mated, laying queen. Inevitably when rushed (I’d just got off a delayed flight from Scotland and was running out of evening) I managed to drop one of the queens as I tried to manipulate her into the marking cage. They can fly, just not well and not far … she did a sort of lazy spiral and was easy to spot because of her size. However, I lost sight of her against the low evening sun in the mass of returning foragers. Oops. I stepped carefully outside the circle of nucs – they usually crash to earth nearby – and tidied up the rest of my gear. It would add injury to insult if I’d managed to stand on her … Finally, on my last look around I spotted her clinging to some grasses near the hive entrance. I caged and marked her, reopened the nuc and allowed her to serenely walk back into the colony. 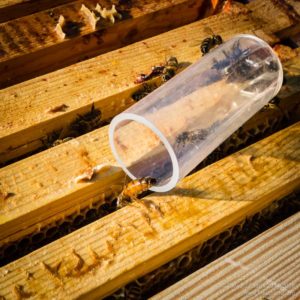 With the exception of some vertical splits (to be described later) that’s the last of my queen rearing this season. I’ve got all the nucs I need for my move to Fife. The next task is to build a load of travel screens …

Both the churchyard swarm and swarm that delivered itself to a bait hive have mated, laying queens. The initial large drop of phoretic mites – more than 150 from the former – shows how valuable prompt treatment with vaporised oxalic acid is. In 2-3 weeks it will be easy to determine the quality of the laying pattern of the queen and the temper of the colony will start to become apparent. At that point a decision will be made to keep them or unite them with another colony.

The move to Harper Adams College has improved the facilities available to people attending the BBKA Spring Convention – there’s more space for the trade exhibits and much better quality lecture theatres for those both speaking or listening in the educational talks.

However, speaking to some of the people running the trade stands (on the Friday, which was the only day I attended in 2014), the impact of BeeTradEx is perhaps beginning to have an effect. There appeared to be empty spaces in the trade tents – though this might have been for exhibitors waiting until the Saturday to set up – and discussion of some exhibitors being offered additional space at no extra cost. I suspect UK beekeeping may not be big enough for two large trade shows per year, particularly since they occur within a month or so of each other.

For the first time (in my memory at least) the trade tent was open on the Friday afternoon and into the evening. This was very welcome. Having spent the afternoon in the Insect Pollinators Initiative presentations I rushed around, stocking up on the essentials I needed. I had a quick look at Thorne’s new poly nucs which appeared to be pretty good quality (and, because they’re smooth on the outside, easy to paint) and their one handed queen catcher, which was disappointingly cumbersome.

As always, everyone was very friendly and it was a great opportunity to catch up with old, and make new, friends. I just hope that the introduction of BeeTradEx doesn’t damage the BBKA meeting … without the bustling trade stands I’m not sure how much of a draw the convention would be.