Anyone reading the beekeepingforum.co.uk will be aware that there are a number of contributors there that enthusiastically recommend the treatment of colonies with vaporised (or, perhaps more accurately, sublimated) oxalic acid to reduce Varroa levels. 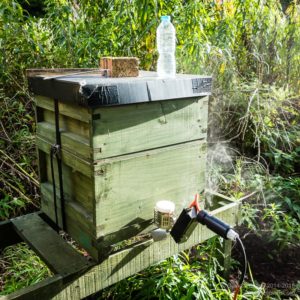 There goes a few pence …

Although vaporised oxalic acid (OA) has been used by some for many years, the speed with which it has recently been embraced by many UK beekeepers (at least those that contribute to discussion forums and, perhaps to a lesser extent, those I speak to in associations over the winter) probably reflects two or three things:

There are almost as many homegrown or imported vaporisers as there are treatment regimes to hammer down the mite levels. Of course, there’s the contentious point that oxalic acid is not approved by the VMD (Veterinary Medicines Directorate), despite having been in routine use for decades. Api-Bioxal is, but is probably unsuitable for sublimation due to the inert (as far as Varroa are concerned) additives it contains. Api-Bioxal can be vaporised but leaves a caramelised residue in the vaporiser pan that is hard to clean. 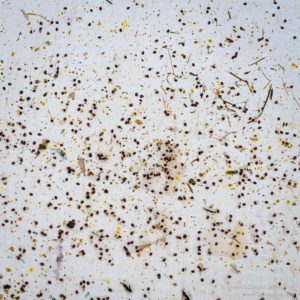 ‘Vaping’ is also popular in the US. Randy Oliver has covered it extensively on his scientificbeekeeping.com site and it’s also regularly discussed on Beesource. OxaVap make/supply a vaporiser that appears very similar to the Sublimox I use. The OxaVap model has a useful temperature display that I would find much easier to read than the red/green diodes on the Sublimox … I’m red/green colourblind.

The Sublimox and OxaVap vaporisers are ‘active’ … they blow out a dense cloud of OA-containing vapour through a relatively narrow diameter nozzle (the video below uses water to demonstrate this process). This provides advantages both in terms of ease and speed of delivery. These vaporisers simply need a 7mm hole drilled through the sidewall of the floor (see photo at the top of the page), or through an eke placed over the colony. The OA-containing vapour is ‘squirted’ in, permeates all corners of the hive within seconds and you can then move on to the next hive. The vaporiser doesn’t need cooling between treatments and the dose administered is tightly controlled.

However, OA dosage isn’t critical. It has been shown to be well-tolerated by bees in studies from groups in the UK and Germany. If the dose isn’t critical and speed really is important then perhaps consider the vmVaporizer. At $3600 it’s about ten times the price of a Sublimox. 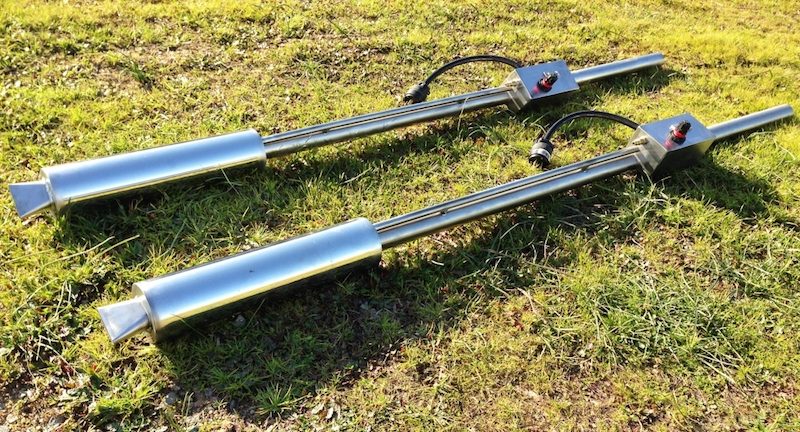 The manufacturers claim you can treat 300 hives an hour with one of these … one every 12 seconds. For comparison, the Sublimox takes 20-30 seconds per hive. However, what takes the time is sealing the hive, moving the generator about, unsealing the hive etc. so you’d need a team of (well protected) helpers and some closely spaced hives to achieve a similar rate. The vmVaporizer is mains (110V) powered so would also need a generator or inverter.

The video above demonstrates the vmVaporizer in action. It produces copious amounts of oxalic acid vapour, albeit less ‘forcefully’ than the Sublimox. It seems the only way to control how much is delivered is by changing the duration the hive is exposed for.

Undoubtedly this is overkill for the majority of readers of this site, but it’s interesting to see what the commercial beekeeping community are using (much like browsing the decapping or bottling machines in the Swienty catalogue). There’s at least one satisfied UK-based beekeeper quoted on the vmVaporizer site so … Mark, if you happen to read this I’d be interested in how well the machine works and whether you can achieve the quoted hive treatment every 12 seconds?

And, does it work with Api-Bioxal?