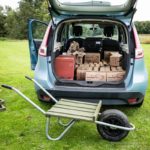 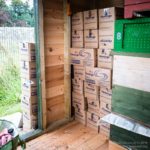 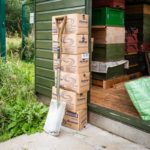 In late August 2014 I described how I feed my bees fondant in the autumn. It’s a simple, quick, clean and efficient way to feed colonies. Additionally, I’m reasonably convinced that there are advantages for the bees as well as the beekeeper. The advantages (over syrup, either homemade or Ambrosia for example) are numerous:

Point 8 is perhaps debatable. This is my impression having used it for several years, though I’ll admit to never conducting a proper side-by-side comparison. Fondant is certainly taken down more slowly than syrup. A full block (12.5 kg) might take 4-5 weeks, though it can disappear much faster. Since the water content of fondant is not wildly different from honey it takes about the same amount of storage space. In contrast, even thick syrup (2:1 sugar to water by weight) needs to be concentrated by the bees, requiring more temporary storage (where the queen might be laying or you might want her to lay to raise those all-important winter bees), reasonable temperatures and more energy.

Don’t take my word for it …

Peter Edwards of Stratford BKA used to have a posting on feeding fondant but I’m reliably informed it’s disappeared in a website revamp. He was a strong a advocate of the ease and benefits of using fondant … so don’t think that this is just my crackpot idea. Actually, it’s not his crackpot idea either … it’s not crackpot at all. And there are very few new ideas in beekeeping.

I’ve used nothing but fondant for winter feeding for at least 5 years. I’m not aware of any problems doing this. My overwintering colony losses are satisfactorily low and almost always attributable to issues other than feeding. Like a Mac, “It just works™“.

How to feed fondant

Open the box and slice the block of fondant in half. There are two easy ways to do this: 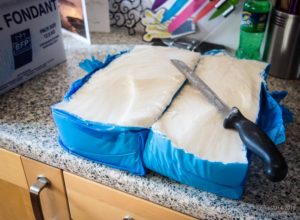 In both cases leave the plastic wrapping on and don’t cut right through it … the idea is to open the block out like a book and place it face down onto the top of the frames. I used to leave the queen excluder in place but generally only do this if there’s a reason I might need to inspect the colony again (with care you can lift the QE and fondant off together). The plastic wrapping on 5 sides of each half block stops the fondant drying out. 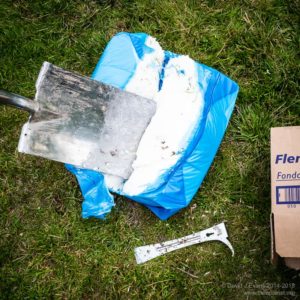 A block of fondant is about 20 x 20 x 32 cm. You’ll therefore need to work out a way of providing sufficient ‘headroom’ under the crownboard. The easiest way is to use an empty super. Alternatively, where I’ve got insulated perspex crownboards, I invert them over a simple eke allowing me to see how fast the fondant is used and top it up as necessary. If, like me, you consider hive insulation important leave this in place under the roof. If I’m using a super to enclose the fondant I try and use a polystyrene one for the same reason. 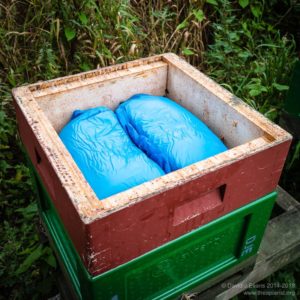 I usually remove the empty  bag when I do the midwinter Varroa treatment, or before if they’ve finished it (in which case I might add another half block or so if ”hefting the hive’ indicates it’s still a bit light). The bees usually build some brace comb on the top of the frames extending into the bag. Just gently smoke them down and scrape it off, or leave it there until the Spring.

The end is nigh

Feeding the colony up for winter marks the end of the practical beekeeping season for me. I usually experience a mixture of sadness that it’s over again for the year, together with anticipation of what’s to come the following season. With the exception of a few nucs and some colonies in the bee shed, inspections and any sort of regular checks on the colonies are over. The summer honey harvest has been taken – hopeless this season unfortunately – and Varroa levels have been monitored and minimised.

Nevertheless, winter preparations such as feeding the colony up, uniting weak colonies which are unlikely to overwinter well, protecting the colony from mice or woodpeckers and hammering down the Varroa levels are some of the most important activities of the year. If done successfully there’s every reason to look forward to having strong, healthy colonies to start the following season.

† You can purchase fondant from bakers and wholesale bakery suppliers such as Fleming Howden. The price I paid – thanks to a friend in the East of Scotland Beekeepers Association – was  £10.55 for 12.5 kg. Ordering in bulk – for example via a co-operative purchasing scheme through your local association – makes a lot of sense and will reduce (or remove altogether) the delivery costs. Single blocks purchased from your local baker might cost 50% more than the price I’ve quoted. Sugar prices vary on the commodities markets … in 2013 I paid about the same as this year, but in 2014 paid only about £9 a box.

BFP wholesale used to sell fondant and had regional outlets (Tamworth in the Midlands and Livingstone in Scotland) from which collection was possible. However, although they have gone into administration, I saw one of their lorries on the way to the office this morning and it appears that the Leeds and Livingstone branches may have been bought and remain operational.

‡ If you have the storage space it makes sense to buy in bulk. Keep it dry and away from wasps, rodents (and other beekeepers) and it has a shelf life of at least three years. You’ll also find it useful for a mid-winter boost, for feeding mini-nucs when queen rearing, for blocking queen cages and for Chelsea buns 😉