A brief triptych of items this week as I’m struggling with an intermittent broadband connection on the remote west coast 1.

Great view but no signal

There are worse places to be cutoff …

There are no significant amounts of heather in central Fife and there’s none within range of my colonies. Work and other commitments mean it’s not practical to take my colonies to the Angus glens, so when the summer nectar flow finishes so does my beekeeping season.

The summer honey I produce is clear, runny honey. It is best described as mixed floral or blossom honey. In some years it has a significant amount of lime in it.

Lime honey has a greenish tinge and a wonderful zesty flavour. In other years it lacks the lime but is no less delicious. 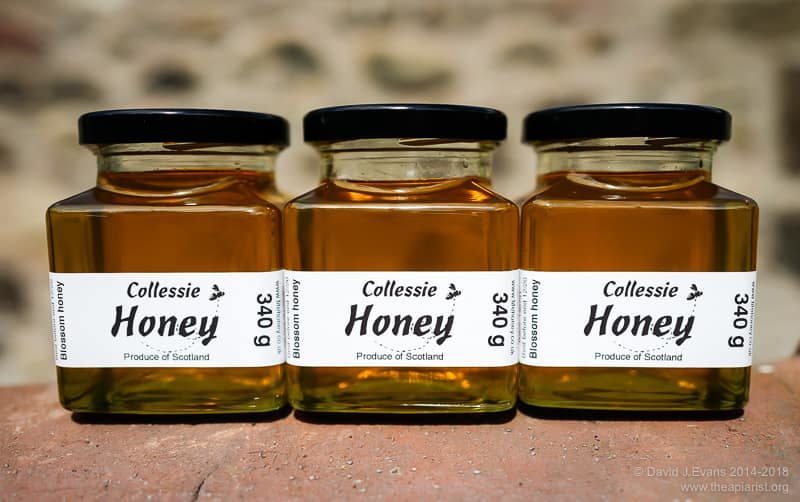 Last year it was “Heinz” honey i.e. 57 varieties. I looked at the pollen content during the excellent Scottish Beekeepers Microscopy course and there was a very wide range of tree and flower pollens, most of which remained unidentified.

What was striking was the relative abundance of pollen in contrast to the ‘control’ samples of supermarket honey. Most of these had probably been subjected to significant filtration during processing.

Following a judicious amount of ‘on the spot’ testing (i.e. dipping my finger into broken honey comb and tasting 😉 ) some of the honey this year has the ‘lime zest’ and, with the flow over, it’s now time to collect it for extraction.

Towards the end of the summer colonies should be strong. A double brood National hive with three or four supers contains a lot of bees.

Some beekeepers use smelly pads to achieve this, some use modified leaf blowers and many use a crownboard with a Porter bee escape (a sort of one-way valve for bees).

I’ve never liked the idea of putting a non-toxic blend of natural oils and herb extracts (the description of Bee Quick) anywhere near my delicately flavoured honey. I know most is capped. However, I want to avoid any risk of tainting the final product.

A leaf blower seems pretty barbaric to me. Shaking bees off the super frames leaves a lot of disorientated bees flying around the apiary. Blasting them halfway to the other side of the field is a poor way to thank them for all their hard work over the last few weeks.

I described the Porter bee escape as a ‘sort of’ one way valve. That’s because they don’t always work dependably. Big fat drones (why were they in the supers anyway?) get stuck, they get jammed with propolis and they’re very inefficient. 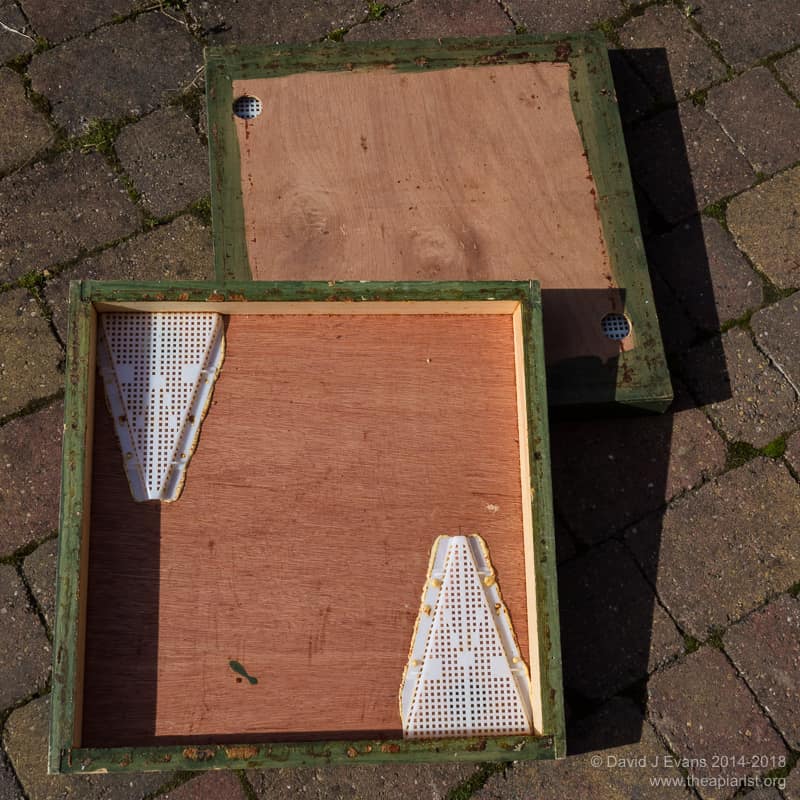 I use a simple clearer board with no moving parts, two large ‘entrances’ and two very small ‘exits’. These clear a stack of supers overnight.

I don’t have enough for all my hives 2 so clear a few at a time.

I stack the supers on top of my honey warming cabinet set at 34°C. This delays crystallisation 3 and significantly improves the efficiency of extraction as the honey flows much more easily. 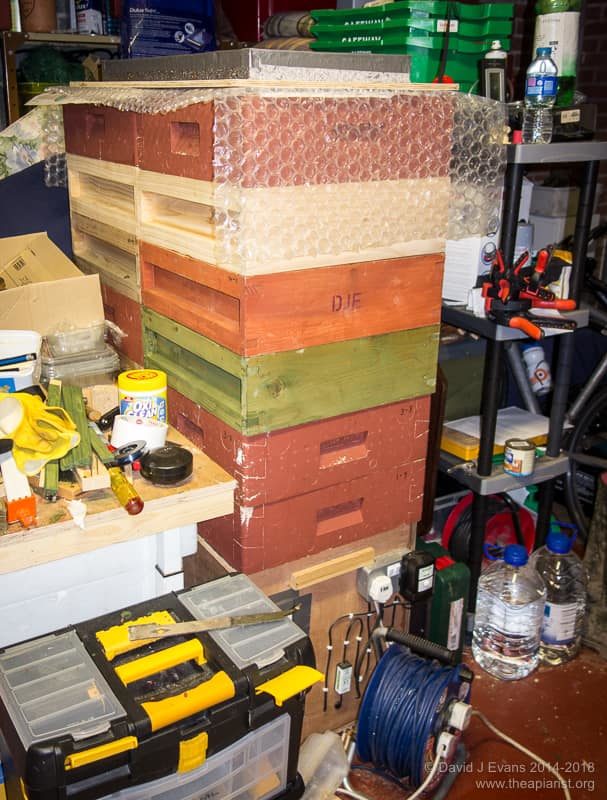 Before leaving the subject of clearing supers it’s worth remembering that colonies can get a bit tetchy once the flow is over. Don’t be surprised if they don’t thank you for pinching all their hard earned stores.

In addition, it is very important to avoid spilling honey from broken comb or exposing colonies – particularly weak ones – which may induce robbing.

I prefer to  add the clearers in good weather and then remove the supers in poor weather the following day, or early or late the next day. Both ensure that there are fewer bees about.

I get a lot of requests for ‘local honey’. Many of these are to alleviate or prevent hay fever. This is based on the belief that the pollen in honey primes the immune system and prevents the adverse responses seen in hay fever.

Despite the lack of scientific evidence supporting any beneficial effect, the repeated anecdotal evidence is reassuring … and certainly helps honey sales 😉

And, whether it helps hay fever or not, it certainly tastes good 🙂

I only produce local honey, but am regularly asked for more details.

Where do the bees forage? How far do they fly?

What is local anyway?

Certainly not the first two, even if we do all now live in the global village 5. Local means ‘the neighbourhood’ or a particular area. 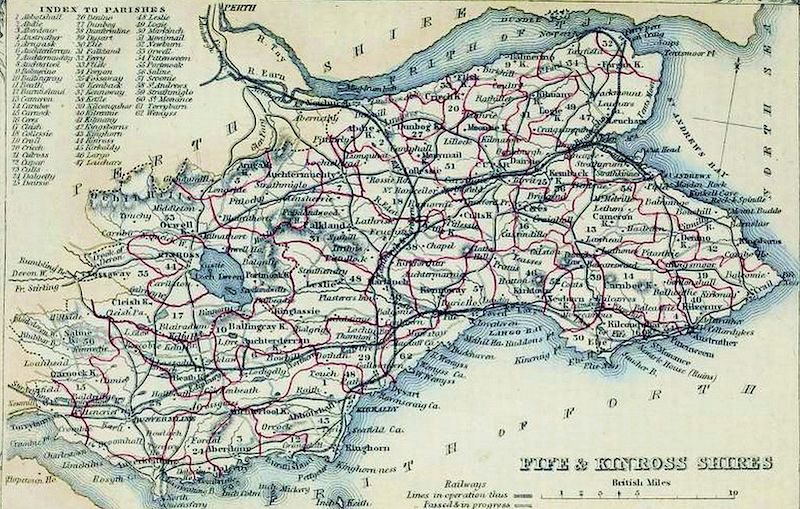 And the honey produced in the spring is very different from summer honey, or in different years.

There’s a lot of interest in eating locally produced food. Just consider the millions of posts using the hashtags #eatlocal on Twitter or Instagram.

Artisan shops that sell local produce tend to sell it at a significant premium. That’s something worth remembering 😉 Customers are prepared to pay more because they know something about the provenance of the produce, or they want to be reassured it has not been transported half way across the globe.

For those who want more information about ‘local’ honey, it would be good to be able to provide it – even if they purchase it in a shop 6. For those who don’t, who aren’t interested, or who just want to spread it thickly on toast 7 then the information is superfluous and should not spoil the appearance of the jar or label.

I’ve been toying with solutions to this over the last couple of years. It provides a bee-related diversion during the long winter evenings.

Some of the commercial Manuka honey producers already have a labelling system that incorporates links to this sort of additional information. With a bit of interweb geekery, a suitable server and a functioning broadband connection it should be relatively straightforward to engineer.