It can be tricky balancing the annual cycle of beekeeping activities with maintaining family responsibilities and domestic bliss. At least, I’m told I find it tricky 😉  Holidays, in particular, are problematic. I’m talking here about beekeepers’ holidays not beekeeping holidays, which are an entirely different thing. Many of the standard “family holiday” periods overlap with key events in the beekeeping calendar … and because the latter is influenced by the weather, it’s difficult to predict a few days ahead, let alone the 6-9 months that appear to be required to arrange a fortnight’s yacht charter in the Bahamas§.

With good weather, colony build-up is going to be full-on in April, and in a really good year you can be starting queen rearing at Easter if it is late in the month. May is when the swarming season starts … and ends in June, just in time for the “June gap” to start which (in a bad year) might require colonies to be fed. The summer months of July and August are busy with the main flow, preparing colonies for the heather or harvesting (and possibly more queen rearing). September means Varroa treatments should be applied and colonies should be fed syrup or fondant for the winter. And then midwinter is interrupted by oxalic acid treatment (or Api-Bioxal if you’re the type of beekeeper who can afford Bahamian cruises), checking stores etc. And almost all of the timings above can be plus or minus at least a fortnight to take account of the vagaries of the weather.

February and November might be provisionally free … which creates another weather-related problem. Firstly – if honey sales have gone well during the year (and they’ll need to have been good as the 90m Athena is an eye-watering $350,000/week) – you’ll not want to be going island-hopping in the Bahamas in November as it’s still the hurricane season. Secondly, if your knees are as bad as many beekeepers’ backs, skiing in February might be a non-starter even if snow is available.

… likely to avoid you losing a swarm. The duration of the family holiday is also an issue. Inspections really need to be conducted at 7 day intervals during the main part of the season – say late-April to late-July. A fortnight away can mean missing the development of queen cells which are capped on the ninth day, at which point the prime swarm with your queen and foraging workforce disappear over the apiary fence. Not only do you return to a rather emptier hive, but your chance of a good honey crop has just been significantly reduced. You can increase the inspection interval to 10 days if you clip your queens, but that’s still four days short of the fortnight.

Queen rearing, from colony preparation, through grafting, cell raising and getting the virgin queens mated, takes about a month and – although not hugely time-consuming – is very-much time-critical. Getting to your cell raiser a day late might mean you have a box with one virgin running about and a pile of virgin queen corpses. 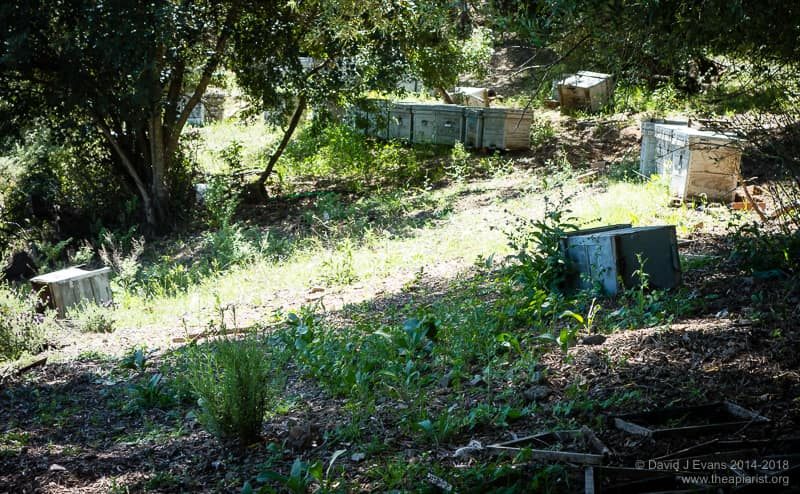 Nevertheless, with a little preparation, an appreciation of colony development and your fingers firmly crossed it is possible to get away during the beekeeping season without too many problems.

It seems to me that there are three obvious solutions …

My knees are a bit dodgy and I get more than enough long-haul with work commitments so option 1 doesn’t work for me. I’ve avoided option 2 as I either have too many colonies to think it’s reasonable to foist upon a beekeeping friend, or they’re so badly behaved I’m too embarrassed to ask∇. So option 3 is the only choice … which is why I didn’t post anything last week as I was enjoying the walking in the Serra de Tramuntana in Mallorca. 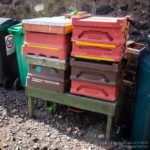 By failing to prepare you are preparing to fail. Sneaking off for a week just as swarming period was kicking off, with the best weather of the season predicted to arrive and the OSR in full flower, might have been asking for trouble. However, a little time spent on preparation helped avert disaster. Bait hives were put out near the apiaries. Remaining overwintered nucs were unceremoniously dumped into a full hive. Any colonies looking even vaguely crowded were given lots of additional space and almost all were on double broods by the time I left. Every full colony was given one additional empty super. Where necessary, one or two frames stuffed with stores were removed and replaced with foundation or drawn comb. Finally, all colonies were checked for queen cells and other obvious signs of swarm preparation the day before I left.

Nine days later I returned … none of the bait hives had been occupied, none of the colonies had swarmed, almost all of the colonies were doing precisely what they should have been doing which was building up strongly and filling the supers. Two in the bee shed were doing particularly well, having almost filled several supers. Pretty much everything was under control with the exception of one queenless colony that, the day before my departure, had been given a frame of eggs and young larvae but had failed to make any decent queen cells.

During my absence the weather in Fife was excellent … in contrast, I walked into this lot in the Tramuntana … 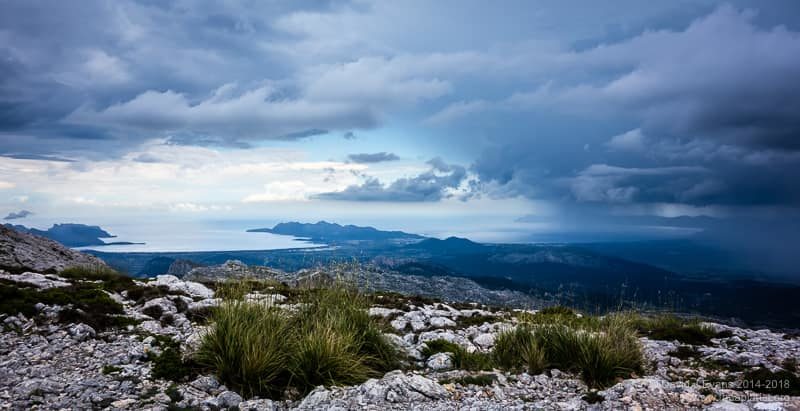 Despite not going on a beekeeping holiday, it’s still possible to see – and sample – some of the local beekeeping activities, as shown in the photos at the top of the page from Mallorca and Andalucia† taken in previous trips.