The Ben Harden queenright method for queen rearing (introduced previously) has relatively few requirements for specialist equipment. Most beekeepers will already own the necessary bits and pieces, and will be able to build, borrow or steal the things they lack as appropriate. 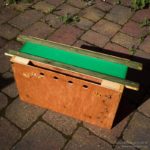 The colony is prepared by adding a second brood box to a standard production colony, separated by a queen excluder. The upper box contains just four frames – two containing ample levels of pollen, one containing unsealed brood and one containing your precious grafted larvae. The remaining space in the upper box is occupied by two oversize ‘fat dummies‘ that concentrate the bees onto the frame containing the grafts.

Assuming you’re starting with a standard colony consisting of a floor, brood box, crownboard and roof the additional equipment needed are as follows:

The cell raising colony – the one you’re going to setup the Ben Harden system in – needs to be strong, healthy and not about to swarm. The genetics of the colony don’t matter – they’re not going to contribute anything other than hard work to raising your grafted larvae. 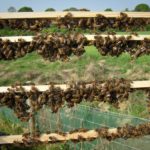 Before using the cell bar frame for grafting paint it liberally with thin syrup and leave it to acclimatise in the cell raising colony for 24 hours. This isn’t critical; you can graft directly into cells that haven’t got the scent of the hive from having workers clean all the syrup off for a day or so. I’ve not noticed any real difference in the proportion of grafts that are successful. However, I think an additional advantage of setting things up a day in advance is it means the colony isn’t too disrupted by an inspection and frame rearrangement on the day the grafts are added.

Therefore, on the day before grafting, inspect the colony to make sure they’re queenright – you don’t need to see the queen, just make sure there are recently laid eggs present. Check for queen cells to be sure they’re not making preparations to swarm. The cell raising process takes a little over a fortnight, so make sure they have enough space to expand into during this time. To encourage the nurse bees up into the upper box you need a frame of unsealed brood – this can come from another hive if needed (just shake the adhering bees from it) or from the bottom box.

You also need to provide ample amounts of pollen and so need two additional frames well stocked with pollen. Again, these can come from the bottom box or from another colony. If pollen-filled frames are in short supply but you have a source of pollen available (for example, collected and frozen from a previous year) you can sprinkle it liberally across the face of two drawn frames and use these. Any frames removed from the bottom box should be replaced with drawn comb – you don’t want to distract the bees with having to draw out foundation. 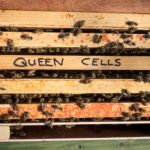 With the bottom box filled with a full complement of frames add the queen excluder and the empty top box. Put the two ‘fat dummies’ on either side, filling the gap in the middle with a pollen frame, the syrup-coated cell bar frame, the unsealed brood and the second pollen frame. Make sure the pollen frames have the faces most heavily loaded with pollen towards the cell bar frame.

If the colony has supers on it these can be added directly on top of the upper brood box. One of the advantages of the Ben Harden method is that it has minimal impact on nectar gathering … in fact, the only real drawback of having a stack of supers on top is all the heavy lifting you have to do to access the grafted larvae.

So, from the top, the colony setup is like this:

That’s it … hope for good weather the following day when you’ll be grafting.