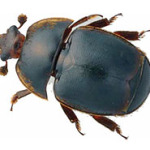 Small hive beetle (SHB; Aethina tumida) is a small, invasive beetle originally from Africa that infests colonies, eating brood, pollen and honey, destroying comb and causing honey to ferment.  Without control, infestation leads to destruction of the colony. SHB is now present globally and, since the 1990’s, has been distributed with bees and bee products (e.g. beeswax) resulting in infestations in the USA and Hawaii, Australia, Canada, Mexico, Jamaica and Cuba. SHB was introduced to Portugal in 2004 (in a consignment of queens from Texas) but very rapidly detected and eradicated. This was the first time SHB was present on mainland Europe … it’s now back.

SHB has been detected in Southern Italy and appears to be well established. The UK imports large numbers of bee packages and queens from Italy. There is a very real threat to UK beekeeping … the summary of an article by the National Bee Unit concluded that “Its arrival in the United Kingdom would pose a significant threat to the long-term sustainability and economic prosperity of beekeeping and, as a consequence, to agriculture and the environment through disruption to pollination services”. My opinion is that the export of bees and queens from Italy should be banned until the extent of infestation is known. In addition, the import of bees and queens to the UK (from all countries, not just Italy) should be banned to reduce the chance of inadvertently acquiring the beetle from a third country.

The impact of SHB and its presence in Italy

In the USA, SHB was first detected in Florida in 1998. Within two years it had resulted in the destruction of 20,000 colonies in the USA. Like Varroa, once established, SHB will probably be impossible to eradicate. The National Bee Unit has produced an excellent (and recently updated) guide to SHB (PDF download) which should be compulsory reading for all beekeepers. It describes the identification of the beetle, the consequences of infestation, the likely impact on UK beekeepers and beekeeping, methods of detection (to be covered in another post) and control.

It appears as though the early infestation in the Calabria region of Southern Italy was overlooked, resulting in the beetle becoming quite widely distributed. The beetle was first detected on the 11th of September 2014, a protection zone (20km) and eradication zone (100km) were established with compulsory colony destruction of infested colonies in the former. Over 1500 colonies have been destroyed, but the protection zone has recently been extended to include much of eastern Sicily. SHB is clearly widespread in Southern Italy and COLOSS – the honeybee research organisation – have recently announced that SHB is in Europe to stay.

Southern Italy has a lot of migratory beekeeping meaning that the beetle is quite possibly even more widespread. Particularly worrying for UK beekeepers is that many bees and queens are imported from Italy, either directly or via a third country. In 2014 over 1200 packages of bees and 1750 batches of queens were imported from Italy, in 27 separate consignments. Only 8 of these consignments were inspected. The total imports from EU countries to the UK in 2014 was much larger, with 1400 packages of bees, 580 nucs and nearly 10,000 queens. Many thousands of queens are exported from Italy to France each year, with some perhaps being used to head the increasing number of French-sourced nucs being imported to the UK each year.

I do not think that UK beekeepers need to import bees or queens from abroad. I suspect that many of the imported queens are used to head early-season nucs being sold to enthusiastic new beekeepers at the beginning of the season, or to beekeepers making up for winter losses. I think the currently popularity of beekeeping, the “pile ’em high, sell ’em cheap” nature of some training courses and, possibly, poor standards of colony preparation for winter and patchy integrated pest management procedures, are the underlying causes for the high demand for early season nucs and queens. I will write separately about this during the winter.

The BBKA have released a statement to the effect that beekeepers should be vigilant, but that the most likely route by which the beetle will be imported is with fruit, vegetables and plant material from the affected area (25th September statement; PDF). There was no suggestion that import of bees from Italy to the UK should be banned. There may be several reasons for this, not least that current EU legislation may not allow such a ban to be imposed. I’m disappointed by failure of the BBKA to take a more aggressive stance to protect UK beekeepers and beekeeping. Although SHB can be transmitted by at least 8 different routes (including flying up to 10km) a published analysis by DEFRA (“Development of an evidence based risk assessment for small hive beetle“)  on the threat from SHB to the UK includes the quote “The pathway likely to present the greatest risk of introduction was the movement and importation of honey bees”. This report was published in 2009.

This situation is developing, but there are only a few months until the new season starts. There are active threads discussing it on the Beekeeping Forum and the – often better informed – SBAi forum. The SBAi forum contains links to a number of maps showing distribution of the beetle in Italy and translations of the pages from reports on Italian beekeeping websites.

What can UK beekeepers and associations do?

Beekeeping associations should discuss their assessment of the risk of SHB to UK beekeeping (as should individuals). Don’t leave this until next season … it may be too late by then. If SHB was to be introduced to the UK I would expect colony destruction to be used as a means of controlling spread, at least initially. Does your association want to risk this? Bee Diseases Insurance (BDI) will cover colony destruction necessitated by the presence of SHB, but the cover is limited to only £50,000 (this is nationally, not per beekeeper). What else could an association do to help prevent SHB changing UK beekeeping?

Once here it is unlikely that we will be able to eradicate SHB. The USA failed, Hawaii failed, Australia failed, Canada failed and it looks almost certain that Italy has failed.

7 thoughts on “Small Hive Beetle (SHB) and the UK”