When does the beekeeping season start?

Some would argue that it’s the time of the year when you prepare colonies for the winter. After all, without good winter preparation there’s unlikely to be a beekeeping season. Others might consider it’s the beginning of the calendar year, just after the longest nights of the year when beekeeping is but a distant memory and all you can do is plan (and build frames). 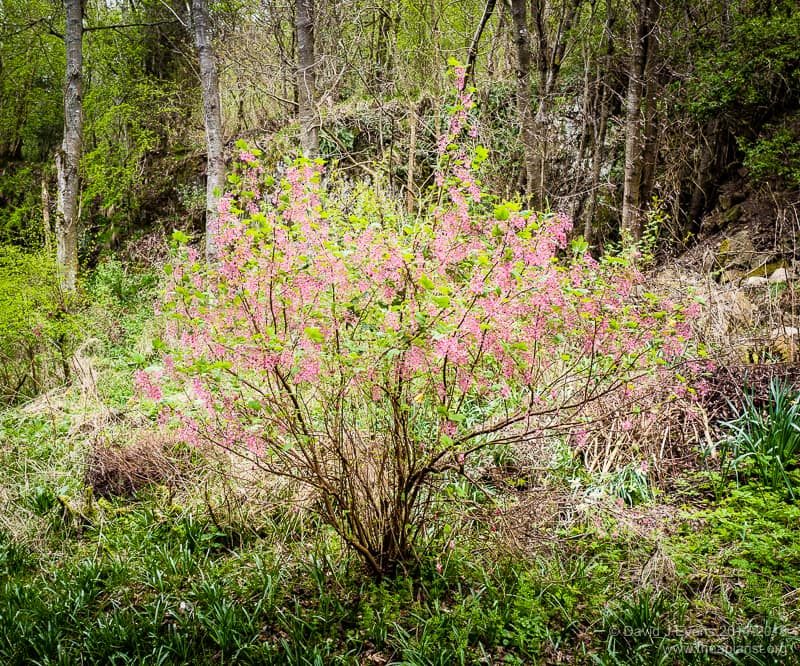 However, perhaps a more logical start of the beekeeping season is the first full hive inspection. This varies from year to year, depending upon the weather. Many consider the full flowering of Ribes sanguineum, the ornamental flowering current, to be a good indicator that the season is underway and that colonies can be inspected. However, the time this plant flowers appears to vary depending upon how sheltered its location is (and possibly the particular cultivar). There’s some in a very sheltered spot approaching the bus station in St. Andrews that was flowering in mid-February this year. Too early by far.

It’s worth stressing here that not only is there season to season variation, there’s also geographic variation. It gets warmer in the South before the North (at least for the ~95% of the readers of this site who live in the Northern hemisphere). If you’re fortunate enough to live in the uncluttered, quiet, pollution-free, traffic-free and scenic (clearly I’m biased 😉 ) North, don’t be misled by the discussions on the online forums of 8 frames bursting with sealed brood in late March. 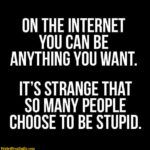 Not what it seems …

Firstly, the poster might actually live in Northern Spain. You can be anything you want on the internet … and anywhere you want. Secondly, some contributors exaggerate when describing their activities and successes (or failures for that matter). Some who, while stressing the fantastic build-up of their Carniolan colonies, conveniently omit to mention they are an overseas breeder and exporter of – you guessed it – Carniolan queens. An omission, but also as the late Alan Clark said, somewhat economical with the actualité. Finally, there’s also a sort of chest-beating macho amongst some where the poster describes pulling colonies apart very early in the season – essentially bragging about the strength of the colonies and their beekeeping prowess.

Use your own judgement about when to open a colony in the early part of the year. Don’t blindly follow the recommendations of others (or me for that matter). The ‘when’ really needs to be informed by the ‘why’.

Not when, but why?

Opening colonies is disruptive. The propolis-sealed crownboard is removed and the colony – even with the gentlest manipulation – is disturbed. There needs to be a good reason to go rummaging through a brood box. That isn’t a justification to not inspect colonies. Just make sure there’s a good reason to compensate for the disruption.

The first inspection should be a quick progress check. Is everything OK? It shouldn’t be a full-blown inspection in which every frame is carefully scrutinised for signs of brood diseases. You’re simply trying to determine whether the queen is laying well, that she’s laying worker brood rather than drone brood and that the colony have sufficient stores and space to expand

All that can be determined in a couple of minutes. You don’t need to see the queen, though it’s not unusual to spot her as the colony is probably relatively sparsely populated. If the box is stuffed with stores consider replacing a frame on the side of the brood nest with a frame of drawn comb. It’s almost certainly too early to only provide foundation.

Spring is appreciably later in Fife, Scotland than in the South of England. At the time of writing (~8/9th of April) it’s rarely been much above the low teens Centigrade. Colonies are working well during the warmest part of the day, but there’s still a chill in the wind and little point in opening the majority of hives. 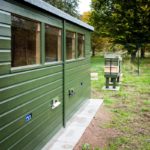 The exception are the hives in the bee shed. Based on my experience last year these colonies are 2-3 weeks more advanced than those outside. On a warm day – yesterday just reached 15°C – the temperature inside the shed was almost 20°C. Three of the colonies were giving me cause for concern. One was a poly nuc that seemed very active. The other two were hives headed by purchased queens from last season – these had gone into the winter well and had been flying on borderline days in midwinter. However, having been away for most of March, I’d noticed they were much quieter than other hives when I checked the entrances in early April.

The strong nuc was doing reassuringly well. It had nearly four frames of brood and last years’ marked and clipped queen laying well. The brood pattern was a bit patchy, but I’ll reserve judgement until later in the season when there’s ample pollen and nectar coming into the hive, together with a full complement of workers to support the queen.

In contrast, the two hives were almost devoid of bees. Both queens had clearly failed in the winter as there was no brood. There was no sign of overt disease (in the few remaining bees) and mite drop had been low in autumn and during the midwinter treatment. I suspect that the queens were poorly mated. Disappointing, but these things happen.

I have yet to look in any other colonies. It needs to warm up significantly before I do. It’s interesting to compare the development of this season with previous years – and to have some notes I can refer back to in the future. As I write this (remember, it’s the 8/9th of April): 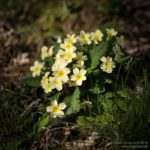 Regional climatic differences are a significant influence on colony development. Remember this as you plan your early season inspections and – particularly if you are a relatively new beekeeper – when you compare how your colonies are doing with those reported by others elsewhere.

Finally, it’s also worth remembering the importance of relative colony development between colonies in the same apiary. A single colony that is developing slowly might be being held back because of poor weather. However, if you have two colonies to compare, one that is obviously retarded might be cause for concern … and should be checked for disease or a failing queen.

This is a good example of when it is beneficial to have two colonies to compare. 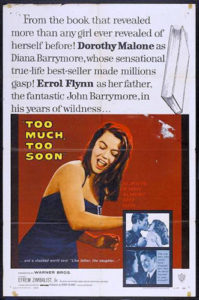 Too much, too soon

Too much, too soon was a 1958 biographical film about the actress Diana Barrymore starring Dorothy Malone and Errol Flynn. The film, based on a best selling book of the same name, describes the life of the alcoholic movie star and was pretty-much panned by the critics.

Not one to set the recorder for … 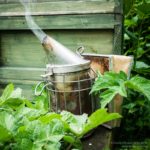 A regular topic on the beekeeping forum is smoker fuel … what to use, how to get it to ignite and how to keep it alight. There are as many answers as there are contributors to the threads, actually usually more. Lighting the smoker is part of the ritual of hive inspections, though it’s not always necessary. A plant mister makes a suitable alternative, particularly for small colonies and nucs. For mini-nucs, it’s the only thing I use. However, for large colonies, particularly for large aggressive colonies (which you’re presumably intending to requeen as soon as practical 😉 ), having a lit smoker to hand can provide peace of mind.

In my limited experience (I’ve only ever owned two), large smokers are easier to light and work both better and longer. With the exception of those that get lost (it happens) or reversed over when leaving the apiary car park (ditto), a good quality smoker should last for many years. I’ve got the smaller of the two Dadant smokers (see image above). I should have probably got the larger one (10 x 4) which is the only model stocked by Thorne’s. At around £50 it’s not cheap, but I expect it to last years more. 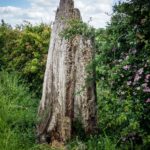 I use egg boxes for quick inspections. They’re easy to carry, ignite easily and smoulder very well, producing a cool – though perhaps rather acrid – smoke. I usually have one in the bag of stuff I carry to the apiary and – on a calm day – can even be used in the absence of the smoker. Alternatively, for longer inspections I use a mix of wood chips and dried rotten wood. Every year or two I’ll find a tree that’s been blown down in the winter storms, uncovering a rotten core. I collect the wood, dry it in my greenhouse and store it in an old plastic dustbin. I buy chipped wood animal bedding from the local Wilkinsons (where they call them ‘wood shavings‘). A large pack, supplemented with dried rotten wood will comfortably last a full season, which is pretty good value for £2. An old 30 lb honey bucket makes a convenient container to store and carry the wood chips/rotten wood mix in. 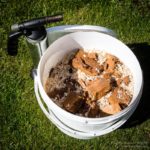 The majority of beekeepers I know use a blowtorch to light their smokers, and with good reason. If you get one with a spark ignition system it will light even in a strong wind. No more struggling with matches while sheltering in the lee of the apiary shed, or cowering in the car boot. A 20 second blast into a part-filled smoker, a few puffs of the bellows followed by topping up of the fuel, should be sufficient for a long session in the apiary. A well-lit Dadant smoker will remain smouldering for 30-40 minutes without attention (for example, as happened this afternoon, while I returned home to collect a spare brood box and frames to perform an emergency Demaree on a colony thinking about going AWOL*). After this period it might need quite a bit of encouragement to produce a good plume of smoke, but a regular couple of puffs of the bellows during the apiary session will keep it ready for immediate use. 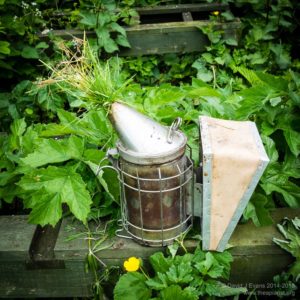 Periodically you’ll come across nightmare stories about smokers causing car fires … they can remain hot for a long time. Either transport them in a tin box or bucket, or make sure they are well and truly out. I stuff mine with grass immediately I finish inspections, potter about a bit tidying up and put the smoker in the car at the very end, once it’s cool to the touch.

Finally, I recommend you don’t leave a smoker in a car overnight … the smell of smoke permeates everywhere and can cause all sorts of domestic problems if you don’t have a dedicated bee-vehicle 😉

Necessity is the mother of invention. I forgot my smoker on a recent trip to an out apiary and had to open a colony (to add fondant) that was livelier than I would have liked. However, I did have some egg boxes and lighter … a scrap of egg box smoulders for a long time and gives more than enough cool smoke to waft along the edge of the cracked open crownboard to calm the bees. 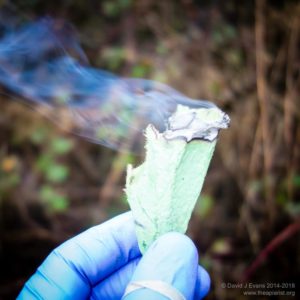 You can even leave it sitting on a (metal) hive roof until you need it. This is probably not a good idea if there’s any chance of of causing a fire but in the winter everything around here is too wet to ignite.