Beekeeping records are important. They allow the accurate assessment of colony health, behaviour and performance over the season. They enable the beekeeper to know what to expect when s/he next inspects and to have the correct equipment to hand. Records help in making comparisons in colony development, in choosing between colonies (which to use for queen rearing for example) and in identifying problems in time. They help in swarm control and are critical for queen rearing.

The scale of the problem

With one or perhaps two colonies it’s possible to remember from week to week. The colonies probably don’t get moved about much, it’s obvious what’s being compared and there’s simply less to remember. However, once colony and apiary numbers increase the problem multiplies. By the time colony numbers reach a dozen, perhaps in three separate apiaries, a beekeeper needs mnemonic skills to accurately recall the last couple of inspections. Assuming standardisation of equipment – definitely desirable for efficient beekeeping – all colonies look pretty-much alike. It’s at this point I start to lose track. I can only imagine the problems faced by the semi-commercial and commercials running hundreds of colonies, with 3-4 minute inspections.

Choosing what to record for each colony is relatively straightforward … it should be the things that are needed for your particular type of beekeeping. For me that includes colony health and temper, whether the colony is queenright, something about colony performance (whether they’re building up well, the number of supers on the colony etc.) and what might be needed at the next visit. While that might sound like a lot it’s abbreviated into a series of ticks, numbers, acronyms and scores out of 5. Oh yes, together with the date of course. The latter is surprisingly important when you’re timing the development of queencells. Did you inspect on Saturday or Sunday (or was it Friday night)? 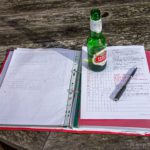 Characteristics like temper, following, steadiness on the comb are important in my choice of colonies to raise new queens from, so each of these are scored on a 1-5 scale. There’s a degree of subjectiveness here, but a 3 essentially means ‘acceptable’ as a colony (but not good enough for queen rearing). Anything consistently lower than 3 is likely to be destined for requeening that season. Anything 4+ (again consistently – see next paragraph) is probably suitable for using as a source of larvae for queen rearing and is also likely to produce drones with desirable characteristics.

I’ve stressed consistently a couple of times. That’s because behaviour is influenced by environmental conditions and how the colony is being manipulated. A perfectly good colony (routinely 4+) opened in poor weather to be shaken through to harvest nurse bees to populate mini-nucs (or an equivalently intrusive and disruptive manipulation) may well ‘underperform’ on the score sheet. Similarly, a dearth of forage or queenlessness may make colonies tetchy. Of course, since the colony behaviour is largely determined by the queen it’s not really possible to fairly score a queenless colony.

The queenright state of the colony is recorded using simple acronyms if I see the queen e.g. WMCQ means white, marked, clipped queen. I try to mark and clip all of my queens, so colonies with WMQ recorded will (hopefully) encourage me to remember to clip her when she’s next seen. Unmarked, unclipped queens are simply recorded as ticks. 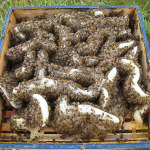 Brood in all stages (BIAS) is an indication of colony strength and, by comparison week to week, of build-up. I therefore record the presence of BIAS and the amount simply by indicating the number of frames of brood present. This is not an exact science. I don’t try working out the area of brood, the ratio between eggs, larvae and capped brood, or the level of drone brood present. The presence of eggs is an indication there was a laying queen present within the last 2-3 days, so it’s possible to have queenright colonies which I’ve never see the queen in. I still give these a tick in the ‘Q+’ column, but perhaps make a note that she’s not been actually seen.

I keep an additional record of any treatments I apply to the colony e.g. oxalic acid (trickle or vapour), Apiguard, together with lot numbers if appropriate. This is a DEFRA (or whatever their current name is) requirement.

Finally, there are usually a few scrawled notes that need to be added. ‘Good laying pattern‘, ‘approaching storm‘, ‘needs super‘, ‘replace floor’, ‘removed frame of eggs – needs new frame‘ and ‘demaree next time?‘ are typical. Fortunately ‘sod it, swarmed, how did that happen?’ or ‘psychotic – matricide – RIP – requeen!!‘ are rarely needed. Any comments on disease such as sacbrood, chalkbrood, the presence of DWV or mite levels are also recorded in the notes. 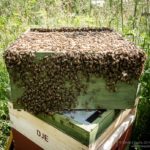 Since colonies usually stay in the same location in an apiary I have crude numbers scrawled on my hive stands and use these to refer to the colony. However, this starts to break down if you move colonies about a lot, putting them on OSR or taking them to the heather. In this case, unique numbers on the brood box might be better (and something I’m intending to start using next year as a lot of my colonies got shuffled during the move to Fife). If you’re going to use a lot of nuc boxes to raise queens it helps to use letters to ‘number’ these with, ensuring they’re distinct from full-sized boxes. Of course (as already mentioned), since the majority of the characteristics are attributable to the genetics of the queen, it might be best of all to keep records associated with each queen. However, my attempts to use those numbered disks resulted in getting a queen superglued to my index finger, so I’m sticking to numbered boxes for the moment.

What to record is the easy part. You can make it as simple or as complicated as you like. Highly selective queen rearers might score a number of additional characteristics, or use a finer grained scale than 1-5. Perhaps honey yield is all-important to you and the weight of filled supers should also be included. What I’ve described works for me, has evolved over a few years and is reasonably easy to record quickly.

How to record these records is a little more difficult and will be discussed next time.