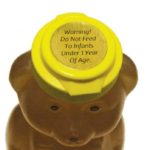 Do not feed to infants

I was recently asked, Why can’t you give young babies honey?

But just because you can doesn’t mean you should.

And on this point the NHS guidelines are very clear. You should not give honey to babies under 12 months of age because there is a risk that they might get botulism.

Botulism is a serious, sometimes fatal, disease caused by infection with a bacterium called Clostridium botulinum. As it grows, C. botulinum produces neurotoxins which cause a flaccid (floppy) paralysis and can result in respiratory failure. About 5-10% of cases are fatal, but infections thankfully very are rare.

Symptoms include fatigue, weakness, blurred vision and difficulty speaking and swallowing. The paralysis is ‘descending’, generally starting in the head and neck, then moving to the shoulders, arms, chest and lower limbs. 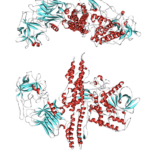 Unusually for a bacterial infection there is no fever. This reflects the fact that there’s probably only limited bacterial growth (which typically induces fever) and the potent neurotoxicity of the botulinum toxin. This toxin stops the release of the neurotransmitter acetylcholine from the nerve endings, thereby causing paralysis.

Botulinum toxin is one of the most acutely lethal toxins known. The lethal dose depends upon the route of administration, but is between 1.3 and 13 ng/kg 1.

Remember, botulinum toxin is the active ingredient in Botox.

No thanks. I’ll stick with the wrinkles 😉

Botulism cases in the UK/Europe

Botulism is a notifiable disease. Consequently, we have good data on the incidence of botulism in the UK and Europe. In 2014 there were 91 confirmed cases in the EU, with 14 cases reported in the UK between 2010 and 2014. Other than injecting drug users, a significant proportion of the cases are in infants – see below.

C. botulinum is widespread in the environment and infection usually occurs by ingestion of improperly prepared food e.g. undercooked or improperly canned foods, in which the bacteria survives. 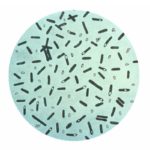 The bacteria grows in the absence of oxygen and produces the toxin during growth. Although the toxin is heat-inactivated if properly cooked (over 85°C), the bacterium also produces heat-resistant spores during growth. These spores can withstand temperatures over 100°C for long periods and usually require both high temperatures and pressures to inactivate them.

As a consequence of this the spores are also very widespread in the environment … cue the Jaws soundtrack … just waiting to encounter the correct conditions to germinate and initiate a new round of bacterial growth (and toxin production).

About a third of all cases of botulism are in the 0-4 age group. I’ve been unable to find a more detailed breakdown by age, but there have been 19 cases of infant (children less than 12 months old) botulism in the UK since 1978.

In many cases of infant botulism the source of the spores is unknown. However, other than well-documented cases of contaminated milk powder, honey is the only food regarded as a significant risk factor. About 60% of cases of infant botulism are in babies with a history of honey consumption 2 and, in several cases, epidemiological follow-up has confirmed that honey was the source of the infection.

Treatment is not with antibiotics as it’s the toxin that causes the symptoms, not the bacteria. Instead patients are treated with immunoglobulin (antibodies) specific for the toxin. These inactivate toxicity fast and recovery is usually complete, but can be protracted.

Oxygen inhibits the growth of C. botulinum. So do acidic conditions. Honey is acidic, with a pH of about 3.9, which is too low for the bacterium to grow. However, the spores remain viable at low  pH. It is this contamination of honey with C. botulinum spores that poses a risk for infants.

It is possible to microbiologically examine honey for contamination with C. botulinum spores. When this has been done, 6-10% of honey samples tested were contaminated, with contamination levels estimated at 5 to 80 spores per gram of honey. The infectious dose for a human is estimated at 10-100 spores 3.

So … much less than one teaspoon of contaminated honey.

Despite this, there is no requirement for honey to carry a label warning that it should not be fed to infants. Instead, the Food Standards Agency recommend honey carries a warning that it is unsuitable for children under one year of age.

Why is infant botulism so rare?

If up to 10% of honey is contaminated with C. botulinum spores, why are there not many more cases of botulism in infants? After all, European paediatricians have even been known  to recommend honey – a long-standing traditional solution – as a means of soothing crying babies4.

The intestine of the developing baby is full of bacteria – the so-called commensal microbiota – all competing to get established and to lead a long, happy and healthy association with their human host. The spores of C. botulinum have to germinate and establish an infection in the face of this competition and, usually, they fail. A likely possibility is that infant botulism only occurs in babies in which the commensal microbiota have not properly developed … either because they are so young, because broad-spectrum antibiotic use has prevented the development of the microbiota or for a pre-existing genetic condition.