Colonies with queen problems at this time of the season are unlikely to get through the winter. It’s therefore better to identify these early enough to try and rescue the situation. Having completed my Varroa treatment I check colonies to determine whether they have a laying queen. If the colony is piling in the pollen, bulging with bees and has few, if any, drones I don’t even bother to open the box. In contrast, a colony with any of the following signs gets a more thorough check:

With a perspex crownboard you can detect all of these without disturbing the bees or opening the box.

I checked the colonies in one of my apiaries as I’d noticed two that were causing some concern at the final OA vaporisation treatment. One had a good level of stores, but the colony was weak and there were no eggs, larvae or sealed brood. The clipped and marked queen – mated earlier this year – was still present but had clearly failed* and, this late in the season, there was no chance of the colony replacing her. The bees were otherwise fine, with no signs of disease, well tempered and were well worth saving.

I disposed of the queen and united them over newspaper with a strong colony on a nearby hive stand. In a few days I’ll put a clearer board under the upper brood box, then rearrange the frames of stores to leave the remaining box packed. Any spare frames of stores – and there should be at least half a dozen – will be used to boost other colonies. 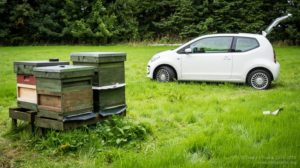 Of course, I’m not really saving these bees at all. Instead I’m using their potential to strengthen another colony, so maximising the chances of getting the recipient colony through the winter. With no brood of any sort in the colony it’s likely the queen failed at least 3 weeks ago. This means that the bees present were unlikely to be ‘winter bees’ and would therefore be expected to perish over the next few weeks. However, in the meantime, they will help strengthen the recipient colony – enhancing it’s ability to raise new brood and increasing the pollen and nectar collected as the season winds down. 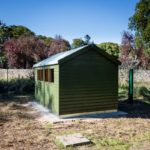 The second colony was weaker than I’d have liked, but – reassuringly – there were 2-3 frames of brood in all stages, together with an unmarked and unclipped queen. Since all the queens in the apiary were clipped and marked earlier in the season this was clearly a supercedure queen, raised in the last few weeks. The colony was beautifully calm so I gently closed them up. My bee house will be ready soon, so I’ll make sure this colony is one of the first to occupy it. The additional shelter should help them through the winter. With the new queen laying well and the weather set fair for the rest of this week, there’s a good opportunity for the colony to build up before they’re moved.

* Remember … some Varroa treatments can cause the queen to stop laying. For example, Apiguard is tolerated by some queens but not others who can stop laying for two or more weeks. The colony with the failed queen (above) had not been treated with Apiguard so I was pretty sure she was a dud.

1 thought on “Use them or lose them”