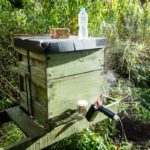 There goes a few pence …

My recent comments on the cost of Api-Bioxal prompted me to look in a little more detail at the cost of miticides routinely available to beekeepers. The figures quoted below are the best prices listed by one of three leading beekeeping suppliers in the UK (E.M. Thorne, Maisemore’s and C. Wynne Jones – there are lots of other suppliers, but I’ve used these three and been satisfied with their service). I made the following assumptions: the beekeeper is purchasing sufficient to treat three single-brooded full colonies for three years (i.e. something with a reasonable shelf-life) with as little left over as possible. Costs per colony treatment were calculated for 9 colonies (3 x 3 years) only … any ‘spare’ can therefore be considered as free. This means that for Apiguard, available in packs of ten trays (5 colony treatments) or a 3kg tub (30 colonies), the cost is calculated per colony from two packs of 10 trays as a full course of treatment for one colony requires two trays. Obviously, buying in bulk – for example through a co-operative purchasing scheme in your beekeeping association – should reduce these costs significantly. No postage costs were included.

Note that this simplistic comparison hides a number details.

Bang for your buck

As indicated above, all of the Varroa treatments listed should give 90+% knockdown in mite numbers if used properly. This means following the manufacturers’ instructions – in terms of dose, time and duration of application. A key point to remember is that the mite is only susceptible when outside the capped cell and that 80% or more of the Varroa in a colony at any one time will be inside capped cells if there is brood present. For this reason, it is preferable to treat during natural (or induced e.g. a shook swarm) broodless periods. It has even been suggested that the midwinter OA treatment should be preceded by destruction of any brood present. Although this makes sense, I can understand why some beekeepers might be reluctant to open a colony to destroy brood in the middle of winter. There have been numerous reviews of individual and comparative efficacy of the various Varroa treatments – for example this well-referenced article on mite treatment in New Zealand from 2008. If used properly there’s little to choose between them in terms of efficacy, so the choice should be made on the grounds of suitability, convenience and cost.

‘Suitability’ is a bit of a catch-all, but requires you broadly understand how and when the treatment works – for example, Apistan is a pyrethroid so works well against sensitive mites, but is pretty-much useless against resistant populations, and resistance is widespread in the UK. ‘Convenience’ is generally high in the ready-prepared commercial treatments – it takes seconds to insert a tray of Apiguard – and much lower if the compound has to be prepared or you have to get dolled up in protective gear. In this regard, the absence of a pre-mixed liquid version of Api-Bioxal is a disappointment. Thorne’s still supply (at the time of writing) Trickle 2, a very convenient pre-mixed 3.2% w/v OA treatment for mid-winter trickling, but for how much longer? Similarly, the gloves, mask, goggles and power needed to treat a colony by OA sublimation makes it far from convenient for a single treatment. 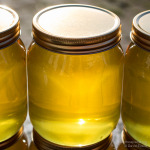 Despite the great differences between the cost/treatment/colony it’s worth noting that even the most expensive is not a lot more than the price of a 1 lb jar of top quality local honey … just like the stuff your bees produce 😉 So, in the overall scheme of things, Varroa treatment is relatively inexpensive and very important to maintain colony health and to reduce overwintering colony losses.