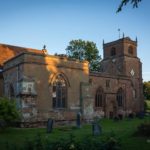 While away on ‘bee health’ business for the day in York I received a call around midday that there was a swarm settling in a small tree in a local churchyard. The combination of the words “small tree” and “within arms reach” is always reassuring, so I promised to have a look when I got back. Inevitably I was delayed and it was nearly 9pm by the time I turned up in the churchyard. I fully expected it to have been collected by another beekeeper, or to have disappeared to a bait hive or even the church tower … but it hadn’t. The swarm was quite small (I suspect it may be a cast) and tightly clustered – exactly as described, in a small tree easily reachable without steps. Excellent. 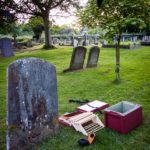 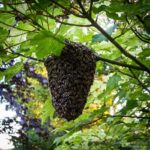 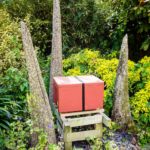 As the final peals of the bells died out I dropped the swarm into an eight frame poly nuc box, gently lowered a full complement of foundationless frames on top, replaced the perspex cover sheet and roof and waited while the few stragglers entered the box. It was lovely sitting in the gathering gloom listening to the fanning bees at the entrance – indicating the queen was in the box – as the evening ebbed away. It was too dark for any photographs unfortunately. Shortly after 10pm the nuc box was installed in my garden on a levelled stand – to allow the bees to draw the foundationless frames out vertically – and they were busy making orientation flights when I checked at 6am the following day.

Although the bees looked perfectly healthy I’ll keep them away from my main apiaries until I see some brood and can check them thoroughly. In the meantime, and before they have sealed brood, I’ll treat them with oxalic acid vapour to minimise the phoretic mite numbers. To help them draw out new foundation I’ll give them a few pints of thin syrup (I’m still using up some old fondant left over from last winter) if the current nectar flow dries up – the rape is gone and the blackberry is just starting, but my other colonies are bringing something in. Finally, I’ll keep a close eye on their temper and general behaviour and, if unacceptable, will either requeen them or unite them with another colony.