At least, sometimes it doesn’t.

In particular, the crime of robbery can have unintended and catastrophic consequences.

The Varroa mite was introduced to England in 1992. Since then it has spread throughout most of the UK.

Inevitably some of this spread has been through the activities of beekeepers physically relocating colonies from one site to another.

However, it is also very clear that mites can move from colony to colony through one or more routes.

Last week I described the indirect transmission of a mite ‘left’ by one bee on something in the environment – like a flower – and how it could climb onto the back of another passing bee from a different colony. 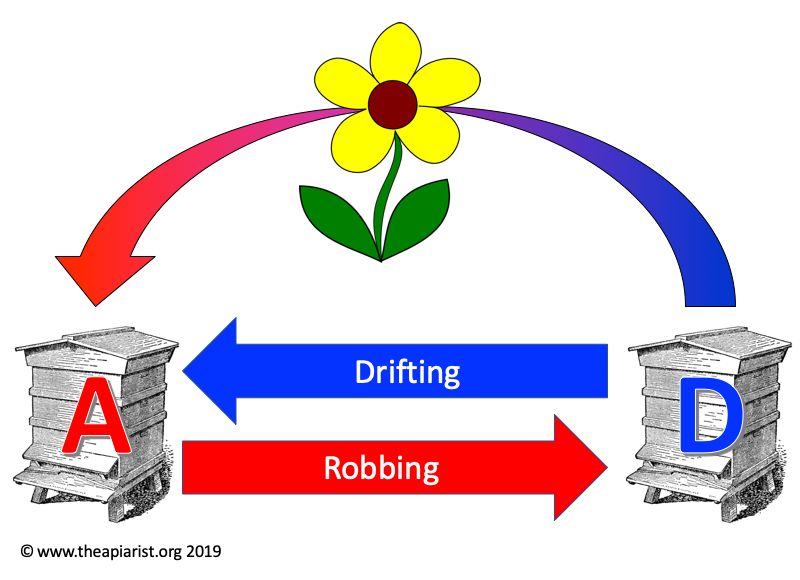 As a consequence colony to colony transmission could occur. Remember that a single mite (assuming she is a mated female, which are the only type of phoretic mites) is sufficient to infest a mite-free hive.

However, this indirect route is unlikely to be very efficient. It depends upon a range of rather infrequent or inefficient events 1. In fact, I’m unaware of any formal proof that this mechanism is of any real relevance in inter-hive transmission.

This week we’ll look at the direct transmission routes of drifting and robbing. This is timely as:

There have been several previous studies of mite transmission.

Usually these involve a ‘bait’ or ‘acceptor’ hive that is continuously treated with miticides. Once the initial mite infestation is cleared any new dead mites appearing on the tray underneath the open mesh floor must have been introduced from outside the hive.

All perfectly logical and a satisfactory way of studying mite acquisition.

However, this is not a practical way of distinguishing between mites acquired passively through drifting, with those acquired actively by robbing.

To achieve this Peck and Seeley established a donor apiary containing three heavily mite-infested hives of yellow bees (headed by Italian queens). These are labelled MDC (mite donor ccolony) A, B and C in the figure below. This apiary was situated in a largely bee-free area.

They then introduced six mite-free receptor colonies (MRC) to the area. Three were located to the east of the donor hives, at 0.5m, 50m and 300m distance. Three more were located – at the same distances – to the west of the donor apiary. These hives contained dark-coloured bees headed by Carniolan queens.

Peck and Seeley monitored mite acquisition by the acceptor hives over time, fighting and robbing dynamics, drifting workers (and drones) and colony survival.

The underlying hypothesis on the relative importance of robbing or drifting for mite acquisition was this:

If drifting is the primary mechanism of mite transmission you would expect to see a gradual increase of mites in acceptor colonies. Since it is mainly bees on orientation flights that drift (and assuming the egg laying rate of the queen is constant) this gradual acquisition of motes would be expected to occur at a constant rate.

Conversely, if robbing is the primary mechanism of mite transmission from mite-infested to mite-free colonies you would expect to see a sudden increase in mite number in the acceptor hives. This would coincide with the onset of robbing.

Graphically this could (at enormous personal expense and sacrifice) be represented like this. 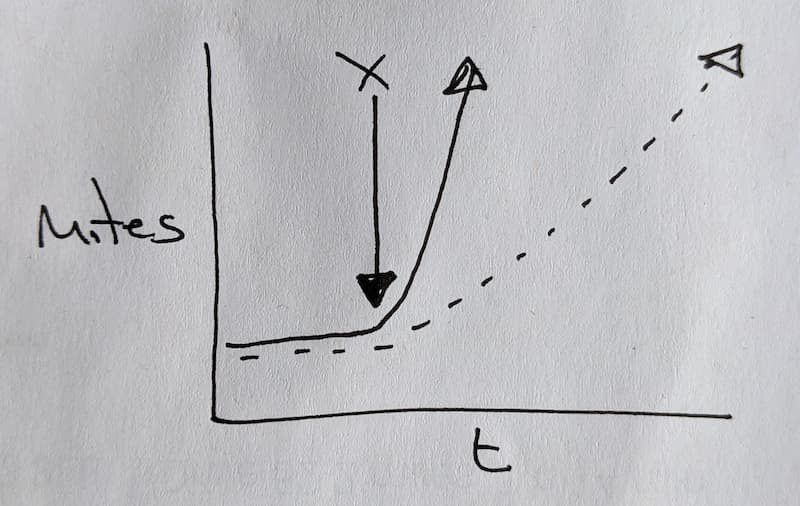 X indicates the time at which the mite-free acceptor colonies are introduced to the environment containing the mite-riddled donor hives.

These studies were conducted in late summer/early autumn at Ithaca in New York State (latitude 42° N). The MDC’s were established with high mite loads (1-3 mites/300 bees in mid-May) and moved to the donor apiary in mid-August. At the same time the MRC’s were moved to their experimental locations. Colonies were then monitored throughout the autumn (fall) and into the winter.

Simplistically, the three mite donor colonies (MDC … remember?) all collapsed and died between early October and early November. In addition, by mid-February the following year four of the six MRC’s had also died.

In every case, colony death was attributed to mites and mite-transmitted viruses. For example, there was no evidence for starvation, queen failure or moisture damage.

But ‘counting the corpses‘ doesn’t tell us anything about how the mites were acquired by the acceptor colonies, or whether worker drifting and/or robbing was implicated. For this we need to look in more detail at the results. 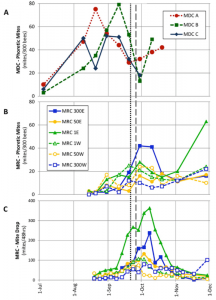 Mite counts in donor (A) and receptor (B, C) colonies.

There’s a lot of detail in this figure. In donor colonies (A, top panel) phoretic mite counts increased through August and September, dropping precipitously from mid/late September.

This drop neatly coincided with the onset of fighting at colony entrances (black dotted and dashed vertical lines). The fact that yellow and black bees were fighting is clear evidence that these donor colonies were being robbed, with the robbing intensity peaking at the end of September (black dashed line). I’ll return to robbing below.

Phoretic mite numbers in receptor colonies then dropped to intermediate levels in October before rising again towards the end of the year.

The authors do loads of statistical analysis – one-way ANOVA’s, post-hoc Wilcoxon Signed-Rank tests and all the rest 3 and the data, despite involving relatively small numbers of colonies and observations, is pretty compelling.

So this looks like robbing is the route by which mites are transmitted.

A policeman would still want to demonstrate the criminal was at the scene of the crime.

Just because the robbing bees were dark doesn’t ‘prove’ they were the Carniolans from the MRC’s 4. Peck and Seeley used a 400+ year old ‘trick’ to investigate this.

To identify the source of the robbers the authors dusted all the bees at the hive entrance with powdered sugar. They did this on a day of intense robbing and then monitored the hive entrances of the MRC’s. When tested, 1-2% of the returning bees had evidence of sugar dusting.

Returning robbers were identified at all the MRC’s. Numbers (percentages) were small, but there appeared to be no significant differences between nearby and distant MRC’s..

The evidence above suggests that robbing is a major cause of mite acquisition during the autumn.

However, it does not exclude drifting from also contributing to the process. Since the bees in the MDC and MRC were different colours this could also be monitored. 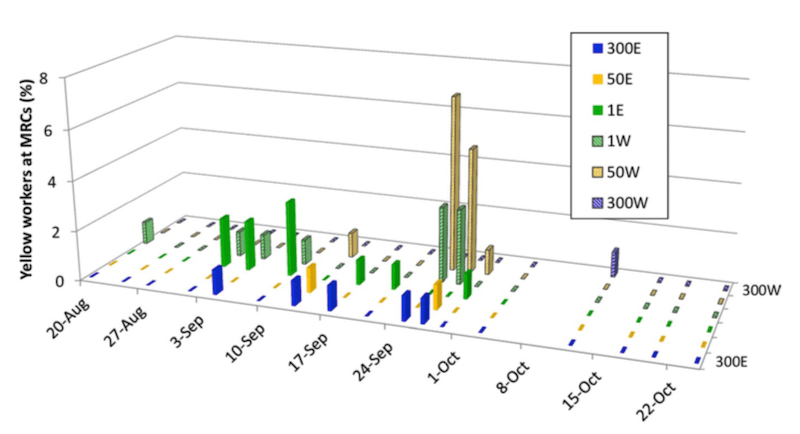 Yellow bees recorded at the entrances of the dark bee mite receptor colonies.

Before the onset of significant robbing (mid-September) relatively few yellow bees had drifted to the mite receptor colonies (~1-2% of bees at the entrances of the MRC’s). The intense robbing in late September coincided with with a significant increase in yellow bees drifting to the MRC’s.

Drifting over at least 50 metres was observed, with ~6% of workers entering the MRC’s being derived from the MDC’s.

If you refer back to the phoretic mite load in the donor colonies by late September (15-25%, see above) it suggests that perhaps 1% of all 5 the bees entering the mite receptor colonies may have been carrying mites.

And this is in addition to the returning robbers carrying an extra payload.

Since the drones were also distinctively coloured, their drifting could also be recorded.

Drones drifted bi-directionally. Between 12 and 22% of drones at hive entrances were of a different colour morph to the workers in the colony. Over 90% of this drone drifting was over short distances, with fewer than 1% of drones at the receptor colonies 50 or 300 m away from the donor apiary being yellow.

This was a simple and elegant experiment. It provides compelling evidence that robbing of weak, collapsing colonies is likely to be the primary source of mite acquisition in late summer/early autumn.

It also demonstrates that drifting, particularly over short distances, is likely to contribute significant levels of mite transmission before robbing in earnest starts. However, once collapsing colonies are subjected to intense robbing this become the predominant route of mite transmission.

There were a few surprises in the paper (in my view).

One of the characteristics of colonies being intensely robbed is the maelstrom of bees fighting at the hive entrance. This is not a few bees having a stramash 6 on the landing board. Instead it involves hundreds of bees fighting until the robbed colony is depleted of guards and the robbers move in mob handed.

As a beekeeper it’s a rather distressing sight (and must be much worse for the overwhelmed guards … ).

I was therefore surprised that only 1-2% of the bees returning to the mite receptor colonies carried evidence (dusted sugar) that they’d been involved in robbing. Of course, this could still be very many bees if the robbing colonies were very strong. Nevertheless, it still seemed like a small proportion to me.

It’s long been known that mites and viruses kill colonies. However, notice how quickly they kill the mite receptor colonies in these studies.

The MRC’s were established in May with very low mite numbers. By the start of the experiment (mid-August) they had <1% phoretic mites. By the following spring two thirds of them were dead after they had acquired mites by robbing (and drifting) from nearby collapsing colonies 7.

The science and practical beekeeping

This paper confirms and reinforces several previous studies, and provides additional evidence of the importance of robbing in mite transmission.

What does this mean for practical beekeeping?

It suggests that the late-season colonies bulging with hungry bees that are likely to initiate robbing are perhaps most at risk of acquiring mites from nearby collapsing colonies.

This is ironic as most beekeepers put emphasis on having strong colonies going into the winter for good overwintering success. Two-thirds of the colonies that did the robbing died overwinter.

The paper emphasises the impact of hive separation. Drifting of drones and workers was predominantly over short distances, at least until the robbing frenzy started.

This suggests that colonies closely situated within an apiary are ‘at risk’ should one of them have high mite levels (irrespective of the level of robbing).

If you treat with a miticide, treat all co-located colonies.

However, drifting over 300 m was also observed. This implies that apiaries need to be well separated. If your neighbour has bees in the next field they are at risk if you don’t minimise your mite levels … or vice versa of course.

And this robbing occurred over at least 300 m and has been reported to occur over longer distances 8. This again emphasises both the need to separate apiaries and to treat all colonies in a geographic area coordinately.

Most beekeepers are aware of strategies to reduce robbing i.e. to stop colonies being robbed. This includes keeping strong colonies, reduced entrances or entrance screens.

But how do you stop a strong colony from robbing nearby weak colonies?

I don’t know, but it’s perhaps worth considering. I don’t see how it could be harmful.

I feed within a few days of the summer honey supers coming off. I don’t bother waiting for the bees to exploit local late season forage. They might anyway, but I give them a huge lump of fondant to keep them occupied.

Do my colonies benefit, not only from the fondant, but also from a reduced need to rob nearby weak colonies?

But it’s an interesting thought …

Note … there’s an additional route of mite transmission not covered in this or the last post. If you transfer frames of brood from a mite-infested to a low mite colony – for example, to strengthen a colony in preparation for winter – you also transfer the mites. Be careful.

The idiom “Crime doesn’t pay” was, at one time, the motto of the FBI and was popularised by the cartoon character Dick Tracy.

Woody Allen in Take the Money and Run used the quote “I think crime pays. The hours are good, you travel a lot.”