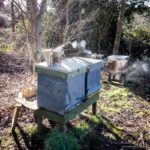 Early Spring in the apiary

During the autumn I united all but one of the weaker colonies in my apiaries (uniting the small colony with a large, healthy colony … there’s little to be gained by uniting weak colonies together at that time of year). The one small colony that did go into the winter has recently succumbed during the extended cold period we’ve had. On a day when other colonies had flying bees bringing in early pollen this one was suspiciously quiet. I lifted the crownboard and found a classic case of isolation starvation. The small cluster of bees were stuck with their heads buried in cells, despite the presence of sealed stores no more than 15cm away. There was no sign of disease, just a pathetic little cluster of bees. My records from the autumn indicated I thought this colony was “a bit on the small side … we’ll see”. 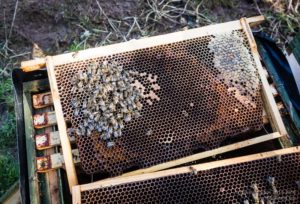 You can see in the image that the bees had started rearing brood – there are about 30 capped cells in the picture and a few on the adjacent frame. There were good levels of pollen in the frames and sealed stores around the edge of several of the frames. However, in the prolonged cold snap the clustered bees were presumably unable to relocate to the stores and so perished. 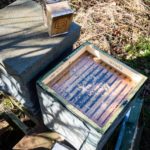 Although all my other colonies had flying bees I took advantage of the sunny afternoon to add a block of fondant to them all, under a reversible insulated crownboard. I use the leftover fondant from autumn feeding which I’ve kept wrapped in plastic in the garage in a big box. The fondant is chopped up and stuffed into “carry-out” plastic food containers and covered with a sheet of thick plastic with a hole cut in the middle. Don’t use cling film to cover the fondant as the bees chew it up and make a terrible mess. Adding the fondant takes moments … a quick waft of smoke at the entrance, remove the roof, take the insulation out of the crownboard, lift the crownboard (giving it a sharp bash on the side to drop adhering bees onto the tops of the frames), add the fondant block near the cluster, replace the inverted crownboard, add the insulation on top and replace the roof. It takes longer to write than to do. 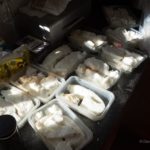 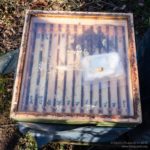 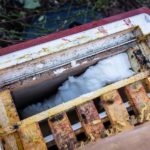 It’s even easier to add fondant to the Everynuc poly nucs. These have come through the winter really well and are bursting with bees. It takes seconds to peel back the plastic crownboard and slide a big lump of fondant into the feeder.

The added fondant should keep them going until either they need another top-up or the spring nectar flows start. Not long to go now 🙂 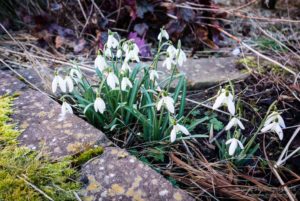