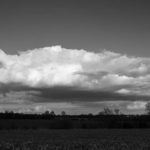 The oil seed reap (OSR) and hawthorn have finished here and there’s very little forage available for colonies. To make matters worse the weather has been changeable, restricting the time available for colonies to forage. Small colonies, such as casts that have been attracted to bait hives, have lacked sufficient numbers of foragers to store any nectar and have needed feeding. Small, weak, nucleus colonies have starved unless supplemented with syrup. In contrast, large swarms have fared much better – it’s almost as if there’s some sort of size threshold below which the colony isn’t able to cope with adverse conditions.

This poor weather has caused significant problems for queen rearing.

There’s not much that can be done about improving the chances of getting queens mated, other than ensuring a supply of freshly emerged virgin queens ready to take advantage of any suitable breaks in the weather. After more than three weeks in a 2-3 frame nucleus I’m usually pessimistic about the chances of getting the queen successfully mated. 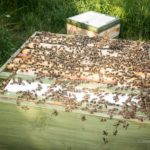 In practice the easiest way to achieve this is to set up the queenright cell raiser the day before grafting (as described in detail previously) with a clearer board on top of the upper brood box, beneath the supers. When you come to add the grafted larvae, first remove the supers which are now cleared of bees and put them aside, gently slide the cell bar frame between the frame of unsealed larvae and pollen, add 150-200ml or 1:1 w/v (thin) syrup to either a fat dummy feeder or frame feeder in the upper brood box, then put the crownboard and roof back. Add the removed supers to other strong colonies in the apiary. 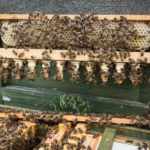 Unless the weather dramatically improves I then check the colony daily, adding a further 150-200ml of thin syrup to the feeder. This just takes a few minutes and results in minimum disruption … a quick waft of smoke at the entrance, the same amount through a slight gap beneath the raised corner of the crownboard and then gently remove the crownboard. The day after grafting I check the larvae to see how many have been accepted. There’s no need to check the cells on the next 3 days (despite the picture shown here), simply add a bit more syrup to the feeder. On the fifth day after grafting the cells should be sealed and there is no longer any need to continue feeding. In addition to preventing tainting the honey supers with syrup, removing the supers also concentrates bees into the brood boxes.