The last colonies to be treated for Varroa this late summer (early autumn?) are those in the bee shed†. These have had consistently low levels of mites all season … levels were so low that we uncapped two full frames of drone brood (individually) from one of them in June without finding a single mite.

… they were treated anyway. I’m reasonably confident that sublimated oxalic acid (which is the active ingredient in Api-Bioxal) does little or no harm to the colony, and am sure that the mite reduction is always beneficial. I’d therefore prefer to treat than regret not treating at a later stage in the winter or early next season.

Expose the bees to the vapour … not the beekeeper

There’s nothing fundamentally different about treating colonies in the bee shed than those outside. Using a Sublimox vaporiser is very straightforward. However, two points need a little more care than normal.

The first is the sealing of the colony. To be effective the vapour must be evenly spread throughout the hive. Because of the ‘tunnel-like’ entrances there are more potential gaps from which the vapour can escape. I therefore do my best to push the hive tightly against the entrance tunnel after sealing the latter with a block of foam. The floors on these hives were built by Pete Little and have a commendably leakproof Varroa tray, making them ideal for sealing the open mesh floor. As an aside, don’t try squirting the vapour in from the entrance … direct inspection through the Perspex crownboard suggests that (at least in my setup) the vapour only poorly permeates the hive if administered like this. Been there, done that. The goal is to get the oxalic acid crystals spread evenly and thoroughly throughout the hive, ensuring maximum exposure to the mites, and maximising the duration of activity against, 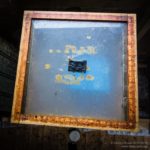 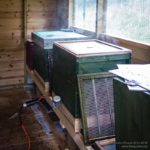 The second point relates to the ‘leakiness’ of the hive and the fact that it’s in an enclosed space (the shed). There’s therefore no chance of standing upwind and allowing escaping vapour to drift away safely. Operator protection is particularly important as the shed is liable to fill with oxalic acid vapour. Eye protection and a suitable particle mask rated for acid particulates are essential. It’s a case of “lighting the blue touch paper and retiring to a safe distance”. With a Sublimox you can simply invert the machine – into the ‘delivery’ mode – and leave it hanging out of a hole through the sidewall of the floor (see photo above right). There’s a couple of seconds before sublimation starts which you can use to step out into the fresh air, only returning once the vapour has cleared.

Finally, if you run your vaporiser off a generator it should also be left outside the shed. Don’t gas the bees when you’re gassing the bees 😉

† Plus a recalcitrant swarm that’s on it’s second round of treatment due to the stubbornly high mite levels. Grrrr.

4 thoughts on “Varroa control in the bee shed”