I’m aiming to raise 12-24 five-frame nucs this summer to populate new apiaries and provide bees for my day job. These will also provide the stocks to replace early season sales of overwintered nucs and donations to friends struggling with misbehaving colonies. The first round of grafting started relatively late (16/5/15) due to the protracted cool weather this spring – even had I managed to raise queens, the prospect of getting them successfully mated would have been limited.

Select the best, replace the worst

Larvae were selected for grafting from one of my best colonies – chosen on the basis of the desirable characteristics I’m able to easily subjectively judge. These include disease, good behaviour and performance. Disease and behaviour are straightforward – obvious signs of chalkbrood or deformed wing virus, running excessively on the frame, following, pinging off the veil or attacking a hand slowly moved over an open colony would all preclude a colony from being used as a source of larvae for grafting. Performance is far more difficult to judge when comparing a relatively small number of colonies. I look for colonies that overwinter well, that build up strongly in Spring and that are headed by queens that exhibit a good laying pattern. 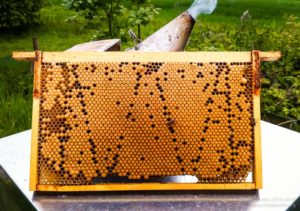 I chose a strong, healthy colony for queen rearing using the Ben Harden queenright system. Despite their vigour, this colony was also bad tempered and unpleasant to handle. With queens, nature is all-important, whereas nurture is only relevant in terms of feeding the developing larvae … using a bad tempered colony to raise cells does not influence the temper of the colony headed by the resulting queens (at least, this appears to be the case and I’ve not seen anything to suggest otherwise). I therefore sacrificed the queen and split the cell raising colony up to populate the nucs for queen mating. 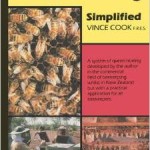 A single brood box setup for queenright queen rearing will probably have at least 10 frames of brood at this stage of the season – most of these are in the bottom box, with a frame or two of (now likely sealed) brood adjacent to the cell bar frame in the upper box, flanked by the fat dummies. These brood frames, and the adhering young bees, can be divided approximately equally amongst a number of 5/6 frame nucs arranged in an inward facing circle around the original colony (which is disassembled and removed during the process). The returning or displaced foragers should then distribute themselves roughly equally amongst the nucs. This method was developed by Vince Cook, a New Zealand beekeeper, and is described briefly in his small book Queen rearing simplified.

This was something I’d not previously tried. I usually either make nucs up and move them to an another apiary to prevent the loss of returning foragers, or make up mini-nucs for queen mating by harvesting nurse bees. However, the unpleasant temperament of the cell raising colony meant that this was an ideal opportunity to sacrifice the queen and use the entire colony to populate nucs for mating the newly raised queens.

In preparation for splitting the colony I’d moved the hive to the centre of a large hive stand (containing no other hives) with a reasonable amount of clear space around it. Division of the colony was then relatively straightforward: 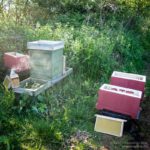 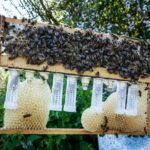 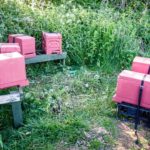 A day or two after the virgin queen should have emerged (but well before any mating flights might occur i.e. 5-6 days after emergence) I checked the – approximate – circle of nucs to ensure they were reasonably well balanced in terms of strength. Using the gentlest waft of smoke I separated the frames and retrieved the – now vacated – queen cell. All the queens had emerged and should get mated over the next couple of weeks … during which time they will be left undisturbed.

It was interesting to note that the nucs were all very well behaved when I checked them, despite originating from a colony that has been consistently unpleasant all season. This isn’t unusual – small colonies are almost always better behaved than full colonies and the presence of a queen, even a newly emerged virgin, often noticeably settles a colony down.

Queen rearing using a Cloake board, something I’ve not used before.