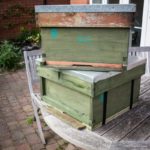 With a week of warm weather forecast it was pretty clear there was going to be a lot of swarming activity last weekend. Colonies had been held back for the previous fortnight by low temperatures and rain. Quick inspections of a few hives during a queen rearing course on the 11th. (when we couldn’t avoid the weather) showed that many colonies had open or sealed queen cells, but the queen was still present. With the temperatures last weekend predicted to reach 20oC I prepared two additional bait hives. Each contained 10 foundationless frames and a single frame of old brood comb – but no stores to avoid the risk of robbing and possible spread of disease.

When preparing these bait hives it’s worth strapping them up securely so that they can be moved relatively easily if and when they are occupied. If they are going to be in a tree or on a roof the last thing you want is for the box to disassemble as you try and bring it down a ladder. Screwing the floor and crownboard in place might seem extreme, but makes sense. 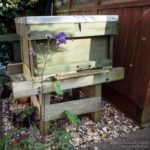 One hive went into the association apiary to try and avoid losing swarms over the fence (which was annoying the neighbours). The other was left tucked into the corner of my garden next to my greenhouse. Within a day or so the hive in the garden was getting attention from scout bees. These examine the hive carefully, going in and out of the entrance, exploring the floor, the sides and back of the box. Numbers built up until there were dozens of scouts visiting late on the Sunday afternoon. However, even later in the evening the scouts disappeared and a dozen or two drones appeared – several of which spent the night in the bait hive (I’m running low on equipment and the garden bait hive used up an old Perspex crownboard so I could have a peek without disturbing any residents). More on this below. 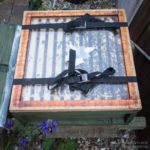 Monday morning was bright and warm and there were dozens of scout bees present from 8am or earlier – well before the other hive in the garden had shown much signs of life. Sure enough, a swarm arrived at lunchtime, quickly entering the hive and settling down. They spread across 5 or more frames, settling on the old brood frame on one side of the box and spreading into the middle of the box. Unfortunately they arrived during a two hour phone call and I missed their arrival entirely. Previous experience suggests that if all the scout bees disappear en masse it is likely that the swarm will shortly arrive. If they simply dwindle in numbers over several hours it’s more probable that the consensus reached by the swarm is that there are more desirable sites elsewhere. Tom Seeley describes the entire process in Honeybee Democracy which is highly recommended.

More freebies (free bees … geddit?) as a small cast arrived on the same day in the bait hive on the association apiary.

There’s always something new to learn … two things stand out from this experience. The first is that drones stayed overnight in the empty hive. Where did these drones come from? Although it’s well known that drones drift from colony to colony – like male teenagers, thinking only of food and sex – I was surprised they chose an empty colony. I suspect they came from a couple of strong nucleus colonies I moved from nearby 24 hours earlier. The fact that they didn’t arrive until late evening – perhaps as late as 9pm – suggests to me that drones are out flying for long periods, and that these particular ones then returned to the nearest hive (albeit an empty one) to their original ‘home’. Interestingly, few if any foragers returned from the same nucleus colonies, although I moved them only about 2 miles. Secondly, it was clear that scout bees were active before the morning had properly warmed up. These definitely did not stay overnight, but appeared at or before 8am.

As soon as I’ve cobbled together some more equipment I’ll be setting out a few more bait hives. Queen rearing has started and I need as many bees as possible to populate nucs and mini-nucs over the next few weeks. Almost irrespective of how badly behaved or temperamental a captured swarm is, the bees can be put to use.