My original bee shed and the new bee shed are about 500 yards apart. There were at least eight colonies that needed to be relocated to the palatial new facility.

En route there was a precariously narrow scaffold plank footbridge, two (not particularly passively) aggressive swans, a large flooded field and a steep earth bank. Thanks to Buster, my trusty hivebarrow, none of these physical barriers were any impediment whatsoever. 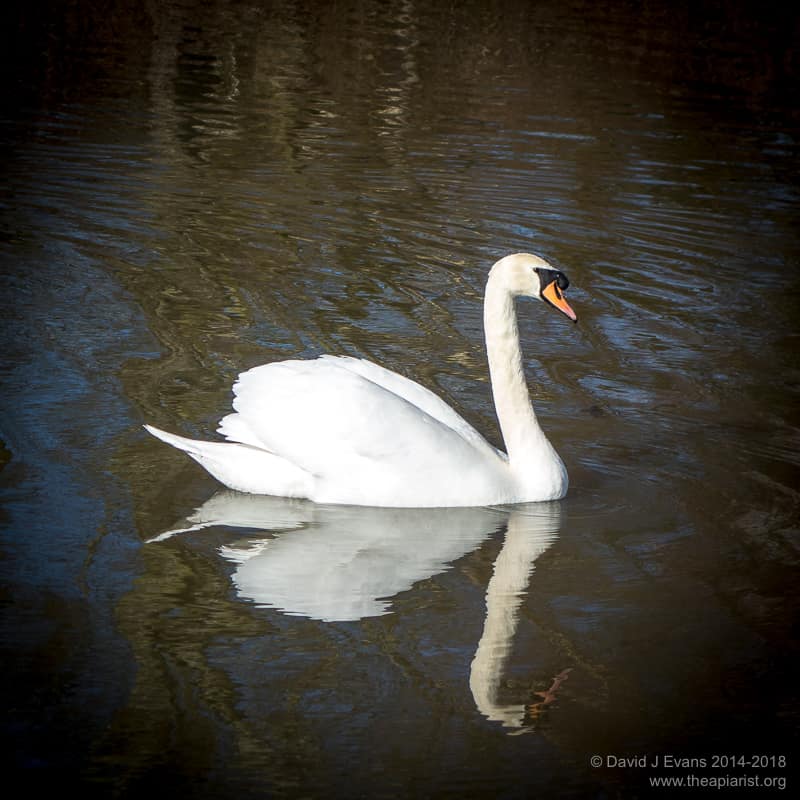 What potentially caused the problem was that the apiaries were only separated by 500 yards.

The usual advice when moving colonies is that it is OK to shift the hive less than three feet or more than three miles.

Less than three feet because the final approach to the hive involves the appearance and smell of the colony. Flying bees that have orientated to the hive in their early flights return to the general location using obvious landmarks, but make the final approach using very local features and the characteristic odour of the colony. Just moving the hive 2-3 feet doesn’t change these local features or odour, so the bees very rapidly find the hive entrance.

The bees cope very well with moving the hive forwards or backwards and slightly less well with lateral movements.

It’s worth noting that the hive entrance should remain facing the same way for this to work. If you reverse a hive it does disorientate the bees though they find the new entrance eventually. This is exploited during vertical splits to separate flying bees with the queen.

More than three miles because the maximum foraging distance is probably a bit less than three miles. Therefore, if the hive is moved further away, all of the familiar landmarks will have disappeared and the bees have no choice but to reorientate to their new location.

In practice I’ve regularly moved hives just a couple of miles without issue. These distances aren’t set in stone.

But what about intermediate distances? For example, the swan-infested, wobbly-bridged and paddy field-like 500 yards separating my two bee sheds?

A totally foolproof and absolutely reliable solution to the problem.

And a lot of work.

However, in high summer with good weather and a large force of foraging bees, this is the method I usually use. I’d fit insect mesh travel screens, seal up the colonies late at night or very early in the morning, move them away for a week and then repeat the entire rigamarole to get them to their final location.

Or, more accurately, only bearable over very short distances. 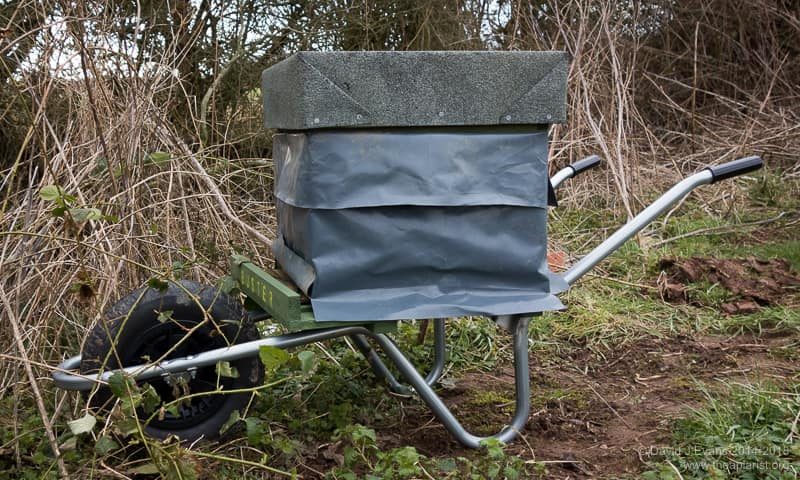 But this is a typical Scottish Spring …

Although the colonies are building up they are still relatively small. Because of the weather they don’t get out foraging every day. When they do it’s for an hour or two at most.

With a reasonably accurate weather forecast and careful timing it is possible to take advantage of this to move colonies intermediate distances with no problems.

The Easter weekend was predicted to serve up the usual depressingly poor weather we expect on Bank Holidays. Other than Sunday we were promised intermittent rain or sleet from the Friday to at least the Tuesday.

In contrast, the Thursday before Easter was good with the bees foraging well, though it cooled quite quickly in mid/late afternoon. Importantly, inside the hives, the colonies remained active … they weren’t tightly clustered. I would avoid moving bees that are tightly clustered in very cold weather 2.

The new bee shed was prepared with clean floors for all the colonies that were being moved. The entrances were loosely stuffed with dried grass. The tyre on the hivebarrow was reinflated and I rummaged around in the bee bag to find some ratchet straps to hold things together.

I then negotiated the flooded field, the stroppy swans, the wobbly bridge across the burn and the earth bank.

Each hive was placed on the floor of the new shed and left to settle while I fetched the remaining colonies. 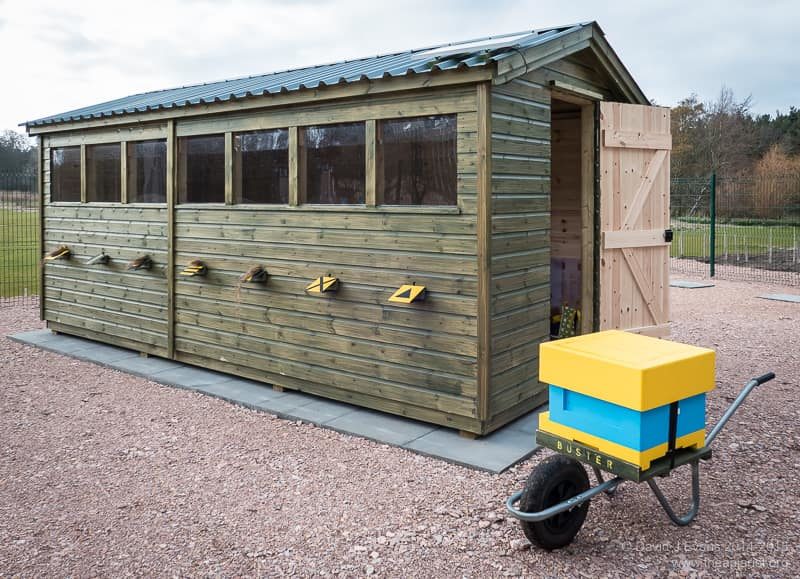 Finally, after 45 minutes or so, I gave each colony a tiny waft of smoke through the OMF to move the bees up, gently split the brood box from the old floor and lifted the hives onto their new floors.

Hardly a single bee escaped during the entire process … and I wasn’t savaged by the swans. 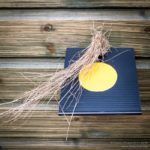 The hives were reassuringly heavy so had sufficient stores. Friday delivered sleet and temperatures no higher than 3°C. The bees stayed warm and snug in the shed. Saturday was particularly rubbish. Sunday was better, but the grass blocking the entrance – now drying in the breeze and weak sunshine – still restrained them. Monday was poor again … by which time they should have forgotten about the original shed. I removed the remainder of the grass on Monday. A few bees appeared, confirmed that the weather was rubbish and quickly returned to the shed.

As I write this the weather is promising to warm up in a week or so, but it’s still unsettled. Any bees venturing out in this first full week of April will be forced to reorientate. They’ll have the brightly painted landing boards to help their final approach. 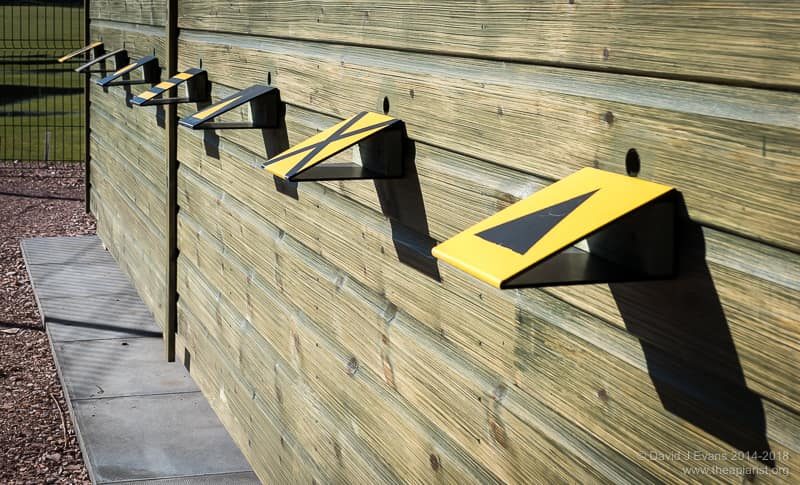 There are still a few more hives to move. Since I need to rearrange colonies between out apiaries for the season ahead I’ll do this by simply swapping distant colonies about.

The > (greater than) and < (less than) mathematical symbols were – surprisingly (to me at least) – first used almost 400 years ago. Thomas Harriot, in his snappily titled bestselling treatise on ‘The Analytical Arts Applied to Solving Algebraic Equations’ 4 stated “Signum majoritatis ut a > b significet a majorem quam b” and “Signum minoritatis ut a < b significet a minorem quam b”. Or something like that 😉 Since then, and particularly since the introduction of the computer and programming languages, the greater and less than symbols have been used for a multitude of other things, not least of which is as integral components of the markup tags used in HTML. This controls the appearance of text and links on the web and explains why the page title does not display properly on the tab of my Safari web browser.

HTML fail, though not too epic.