I’ve covered three swarm control methods in previous posts. These are the classic Pagden artificial swarm, the vertical split that is directly comparable but requires less equipment and more lifting, and the nucleus method.

As described on this site, if successful, all achieve the same two things:

This doubling in colony number, or – more generally – the managed reproduction of colony numbers, is termed making increase.

Making increase is of fundamental importance in beekeeping.

Without deliberately splitting colonies, unless you buy in nucs every year (kerrching!), collect swarms or steal hives 1 your colony numbers would never increase.

Making increase is therefore critical if you want more colonies. However, it’s just as important (and a darn sight less expensive than buying nucs) if you want to make up any overwintering colony losses, thereby keeping the same number of colonies overall 2.

Once you’ve got bees, with good management, you can always have bees. However, at some point you reach that sweet spot where you have enough bees and don’t want more colonies.

The Goldilocks Principle is the concept of having just the right amount. Not so few colonies that a really harsh winter causes problems, and not so many that you cannot enjoy your beekeeping at the peak of the season.

When you reach that point you no longer need to make increase, you just want to keep the same number of colonies.

Which means that the swarm control methods that essentially reproduce the colony may not be ideal.

Of course, you can unite colonies having removed the unwanted queen from one of them, but this is additional work. Not a huge amount of work admittedly, but work nevertheless 3.

This is where the Demaree method of swarm control comes in useful. As practised, Demaree swarm control prevents the loss of the swarm without increasing colony numbers.

It has the additional significant advantages of keeping the entire foraging force of the colony together (even better for honey production than not losing a swarm) and needing no specialised equipment. 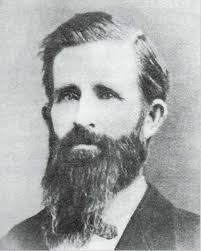 The principle of the method is very straightforward.

When queen cells are found during an inspection you conduct a form of a vertical split, separating the original queen and flying bees from the nurse bees and sealed brood. You place the latter above a queen excluder.

A cartoon diagram of the process is shown below. The only additional equipment required is a brood box with 11 frames of drawn comb or foundation and a queen excluder. 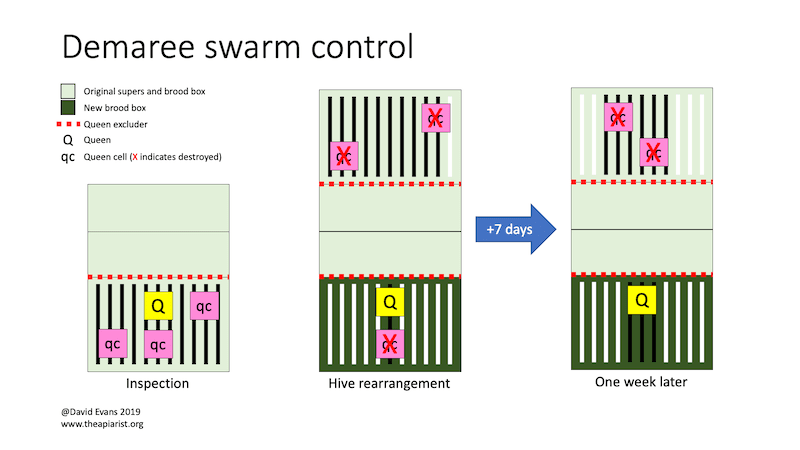 Leave the colony for one week. At the next inspection you should only need to check the top brood box (i.e. the original one).

If you have a reasonable understanding of the development cycle of queen and worker bees you will understand how the Demaree Method simultaneously prevents swarming and keeps the entire colony together.

George Whitfield Demaree (1832–1915) was a lawyer in Kentucky, USA, and a pioneer in swarm control methods. His eponymous method was published in the American Bee Journal in 1892. The original method was subtly different from that described above: 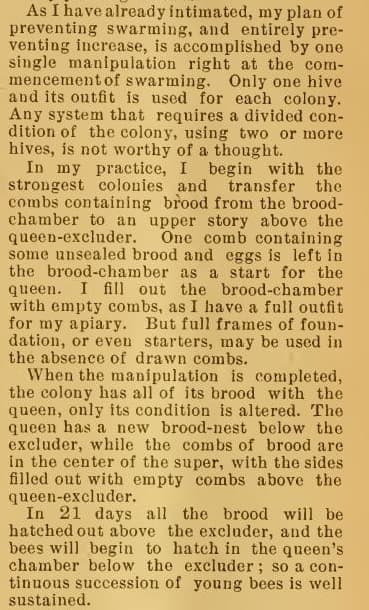 In his description he emphasises the need to keep the colony together to maximise honey production.

I particularly like Demaree’s comment that any swarm prevention method that “require a divided condition of the colony, using two or more hives, is not worthy of a thought”.